Hobby or Retail? Which One to Choose When It Comes to Sports Card Boxes

One of the questions a lot of new collectors have (and some veteran collectors, too) is whether they should buy hobby boxes or retail boxes when it comes to sports cards. And the answer, like much in the hobby, is that it depends. 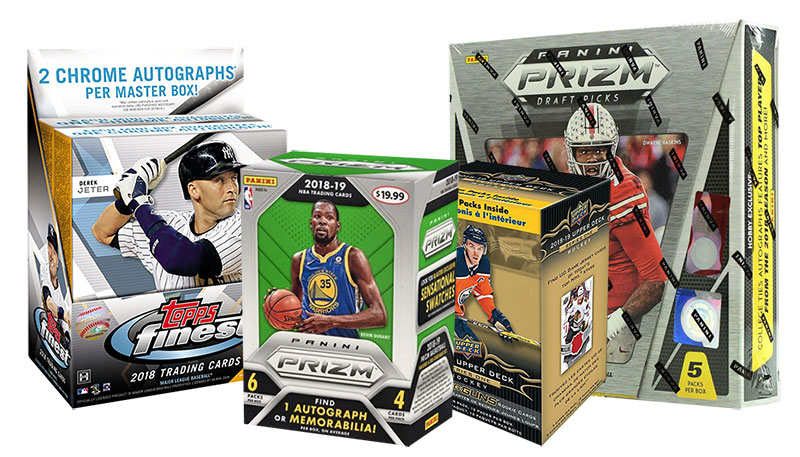 First you need to look at your budget. That could answer your question right there. If your budget is $100 and the hobby box is $150 versus $20 for a retail blaster, then it’s retail. Or nothing. Or waiting until you save up the $150.

Next, it’s what types of cards you’re looking for. While there are similarities in both types, generally speaking, hobby has more of the fancy stuff like autographs and memorabilia. But a lot of retail products have them as well.

The question between hobby and retail can also vary from product to product. Occasionally, it can turn out that a retail configuration is generous when it comes to hits or there’s an exclusive insert or parallel that makes them more compelling.

You’ve got several things to consider when it comes time to choosing. Here are some of the things to think about and consider.

While all cards are geared at collectors, hobby configurations are aimed more at the hardcore collector. That means they generally focus on the premium aspects of a product like autographs and memorabilia cards. Odds of finding them are usually easier as well.

Most hobby products today promise, at minimum, one signature or relic per box. On the other hand, a retail blaster box might give you a manufactured patch card or somewhat generic swatch. Or it might just give you a handful of packs. Even if you’re ripping loose packs, dozens of retail packs might not give a whiff of any ink or premium content. 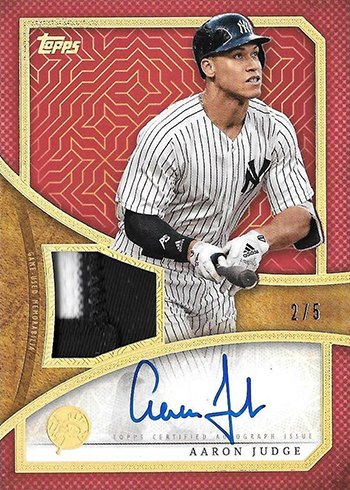 Levels vary, but if you simply break it down to how much you spend for a hit, it’s likely to be less with hobby. It’s important to note that’s across a span of time. Sure, there are instances when that single hanger pack from Target yields something huge. But that’s  the exception.

Not only are high-end cards usually more plentiful in hobby configurations, often it’s the only place you’re going to find them. And it’s not always autographs and relics. Sometimes it’s parallels or scarce inserts.

For a lot of products, everything is a hobby exclusive. That’s because it’s the only configuration. High-end releases usually go this way. You’re not going to find a retail version of National Treasures or Transcendent. Even a lot of mid-range products like Finest are hobby-only. 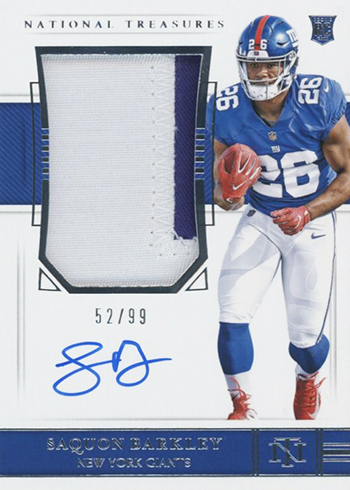 This is important and something that might not cross your mind right away. But it should.

When you buy hobby from your local card shop or online breaker or dealer, you’re supporting small businesses. While card shops might not be as plentiful as they once were, they’re still a backbone in the hobby. By supporting your local card shop, you’re helping that store owner and their staff. You’re putting food on their tables, you’re creating local jobs, you’re putting money directly into your community.

Yes, the Walmarts and Targets of the world do employ a lot of people. But heading to your local card shop or supporting an online retailer or breaker isn’t going to do much to change that. Sports cards are a small piece of the retail juggernaut. 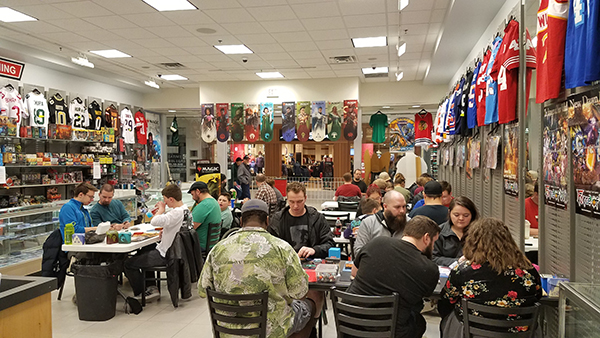 You’re going to get more premium content from hobby boxes, but it comes at a price. A lot of hobby products today start at $100 per box and go up from there. Even the accessible products are generally $50 or more. Compare that to the average retail box that is less than $30.

So if you’re casually interested in sampling a product, hobby can be an expensive way to go. This is particularly true if your expectations are low as far as hits go. For many, it’s a lot easier to make a spontaneous $20 purchase than a $50 one.

The days of a card shop in every town are gone. Some large cities might have just one — and it’s probably a long drive away. For most collectors, heading down to the store for a handful of packs or box isn’t easy anymore. As a result, hobby products might not be a direct option.

Yes, there’s the internet and it’s a beautiful thing. But there’s also shipping involved, which raises the price. And those that do offer free shipping might require you spend a certain amount. Usually, it’s boxes only as well.

That makes those on-the-spot purchases tough. And if you really like a product and want to buy more, ordering through the mail doesn’t have nearly the same instant gratification like hitting up the shop.

There’s another challenge that sometimes comes through with availability, even if you do have a shop nearby. Hot products can sell out fast. So if you’re busy on release day or you catch wind a little late, you could still be out of luck. For small business owners, having lots of expensive stock sitting around isn’t ideal so ordering is done very carefully. When a product is allocated, they might not even get the amount they were hoping for.

There aren’t a lot of retail boxes that would be considered expensive. Even with card makers experimenting with a few different configurations, including some that are similar to hobby, the average retail blaster box is going to be somewhere between $20 and $30. Hanger packs are generally in the $10-$15 range. Single packs can be found for $3 or less.

While the content is going to be different, retail often an affordable option for many. It might also be a way to try something out to see if you want to delve deeper into a more expensive hobby box afterwards.

Once upon a time, card shops were a part of almost every community. But those numbers have shrunk significantly since the early 1990s. Perhaps the biggest advantage for retail is that the big stores are everywhere.

Combine that with the lower price they usually come with and it makes a small sports card purchase an easy add-on when you’re buying a jug of milk, box of diapers or underwear multi-packs that may or may not come with cards of their own.

If you don’t see sports cards out in the wild, you’re less likely to buy them. This is especially true for a potential new collector or someone who has been out for a while and isn’t accustomed with how the Internet shapes a lot of the hobby today. By being front and center in a lot of big chain stores gets cards in front of people. And that spontaneous pack purchase might trigger something and, in turn, bring someone back into the hobby fold.

Retail packs often have some exclusives of their own. While they’re not usually the types of cards that a lot of collectors equate with the big stuff (ie autographs and memorabilia), some of these cards can prove to be popular over time. Look at the Topps Baseball Target Red parallels from a few years ago. Or some of the Panini Prizm colors you can’t find in regular hobby boxes. 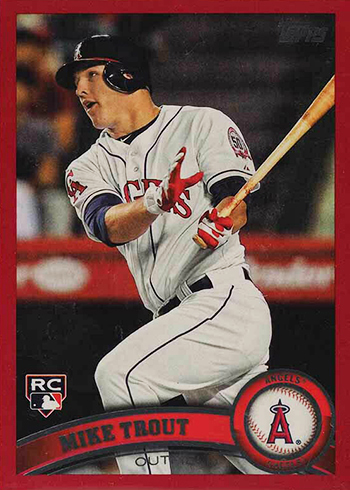 Retail is a place where you can find some solid value or just plain cool cards that, in the long run can be coveted due to their perceived rarity. Part of that is because a lot of retail buyers are collectors who aren’t necessarily selling on the side — at least as much. These retail cards are just as likely to be filed away in a box or tucked in a binder.

Less of the Big Stuff

One of the big pros on the hobby side is one of retail’s weaknesses. Autographs can be scarce. In a lot of products, regular memorabilia can be too. Take something like Topps Baseball that’s plentiful on both fronts. A regular hobby box will give you one signature or relic. A retail blaster usually yields a manufactured relic. But if you want an autograph or a swatch from a game-used relic, they might not even be available. And, as already mentioned, if they are, the odds can be long.

Products can surface early at retail in one part of the country and be weeks late in another. Sometimes, you might not see a product at all. And even if your local Walmart does get some, they may sell out fast and not restock. Or maybe that restock will show up weeks later.

For many retail can be unpredictable. And that can be frustrating.

Hobby can be the same way in one sense. But shop owners can usually give you a good idea of when something will arrive, whether that’s a new release or a re-stock. They might even hold some for you.

On the flipside, a lot of the staff at retail stores probably know little about sports cards. And with outside people supplying them, the stores themselves might not know exact timetables.

Unfortunately, pack searching is a big problem at a lot of retail places. People go rummaging through packs looking for the hits. Not only does this create an uneven playing field, their searching methods can damage the left behind packs. Even if you’re not strictly chasing the big stuff, knowing that there’s no opportunity to find any at all can take away some of the fun.

Not even blaster boxes are immune to deception. Sometimes they be purchased, pillaged, resealed and returned. In turn, the stores put them back on the shelf to be bought once again by unsuspecting collectors. It’s one of the problem with loose return policies major retail chains have.

When It Comes to Sports Cards, Hobby vs. Retail Really Isn’t Really a Debate

Hobby and retail both have their pros and cons. The biggest things to consider are what you are looking for from a box of cards and what you’re willing to spend.

Those two things will likely formulate just about every wax purchase decision.

If you’re into premium cards, hobby is probably where you’re going to gravitate towards most often because that’s where you’re going to find them. But if you are a casual collector who likes to try a pack or two, pulling them off the shelf when you walk by the retail card aisle will probably work just fine. Just know there might be a hobby shop in your area that has more if you’re looking to delve in a little more.