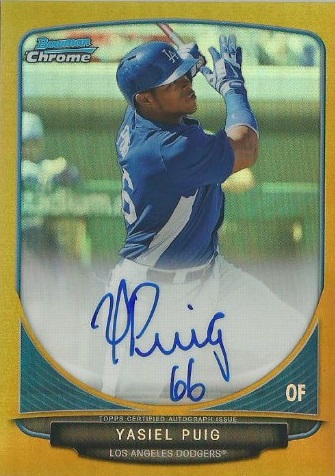 Yasiel Puig has a new team.

The second-year star outfielder for the Los Angeles Dodgers has signed an exclusive autograph card deal with Topps, the company announced on Friday.

“Joining the Topps family is yet another dream come true for me,” Puig said in a prepared statement. “It’s exciting to be pictured on a baseball card and to be part of such a long-standing American tradition.”

He joins Bryce Harper as a Topps-only signer. Puig appears on a total of 977 different baseball cards in the Beckett.com database (click here for a checklist or OPG) with 207 of those autographed. The total value of Puig’s cards, excluding rarities, is more than $35,000.