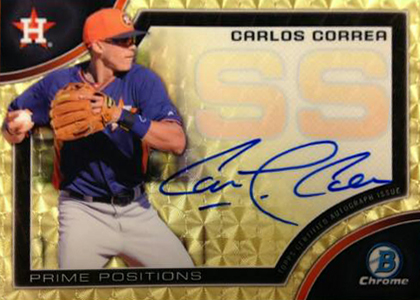 Since signing Carlos Correa to an exclusive autograph deal a few weeks ago, Topps has already made his signature available in 2015 Bowman Chrome Baseball. And that’s just the start.

Up next is 2015 Topps Triple Threads Baseball, which is scheduled to release on September 16.

A full list of all the upcoming 2015 products with Carlos Correa autographs can be found after the jump.

Correa’s signature first appeared in a Topps product in 2012 Bowman Draft as a Perfect Game Autograph. His first Astros autograph card arrived in 2013 Bowman Baseball when he was still a prospect. The card maker’s deal with the Astros rookie gives them exclusive rights to his signature not only on cards but memorabilia as well.