Score broke into the trading card business with their 1988 baseball release. They debuted in football a year later with an iconic set that included an impressive list of Rookie Cards including Troy Aikman, Tim Brown, Cris Carter, Michael Irvin, Barry Sanders, Deion Sanders, Thurman Thomas, and Rod Woodson. Boxes of that set release routinely sell for $800+.

1997 Score Football doesn’t have the same star-studded rookie class as 1989, but there are some big names. Tiki Barber, Warrick Dunn, and Tony Gonzalez all have RCs in this set. 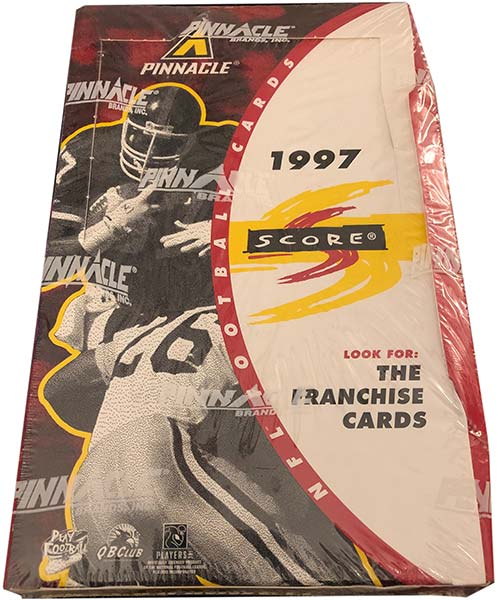 Score also included two different parallels. Showcase Series has silver foil card fronts while Artist’s Proof cards feature a rainbow foil front with a stamp. Two insert sets are also in packs, with The New Breed cards found once in every 23 packs and The Franchise inserts found just once in every two boxes. 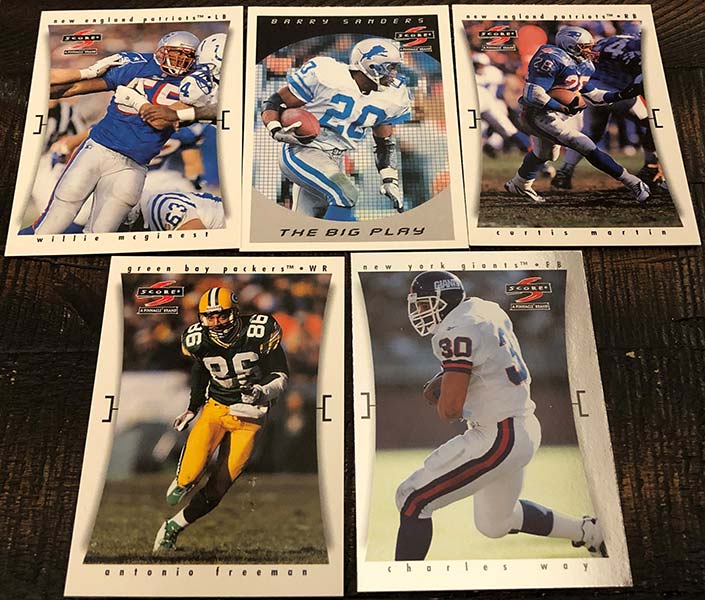 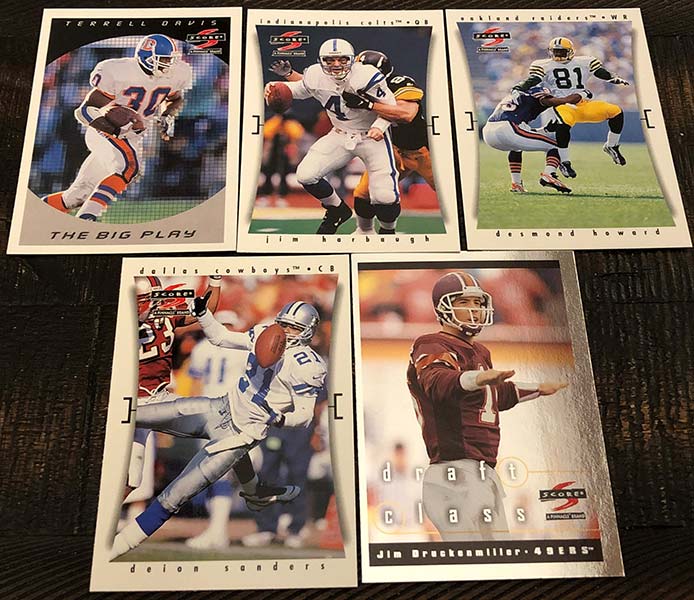 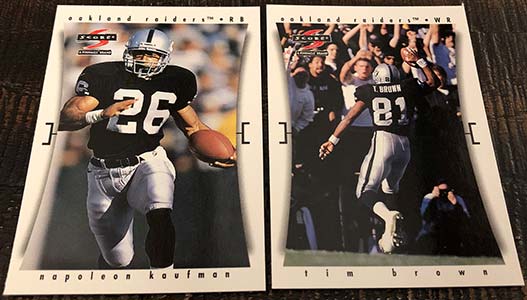 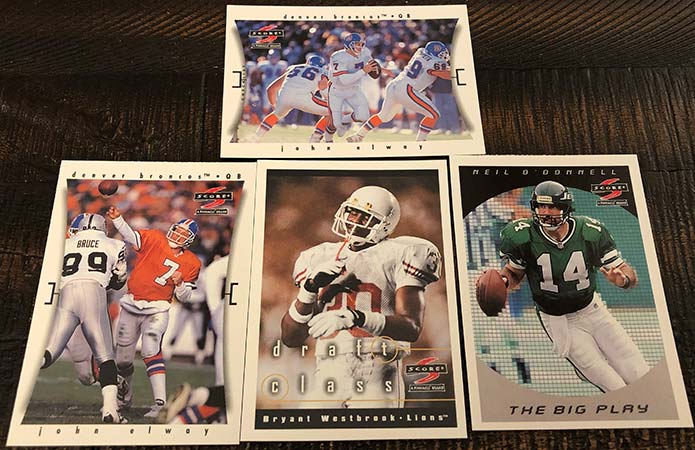 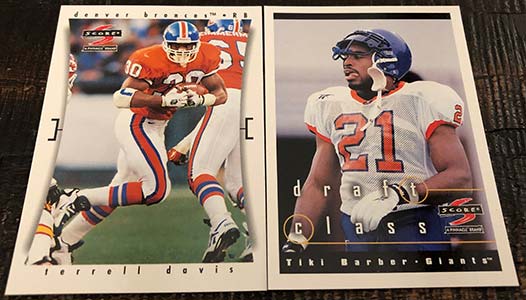 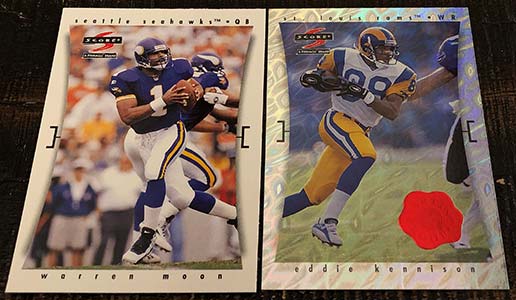 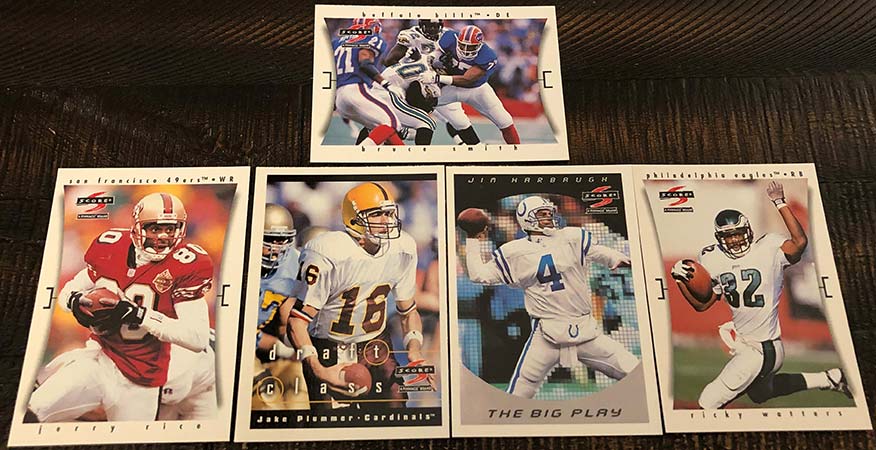 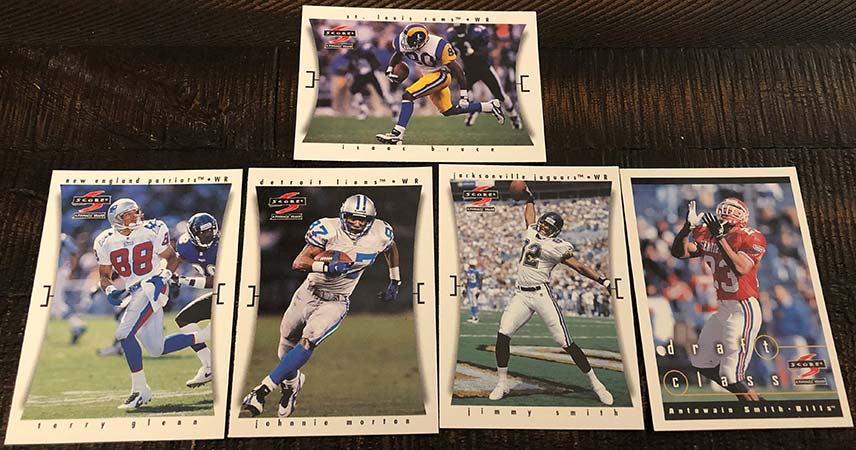 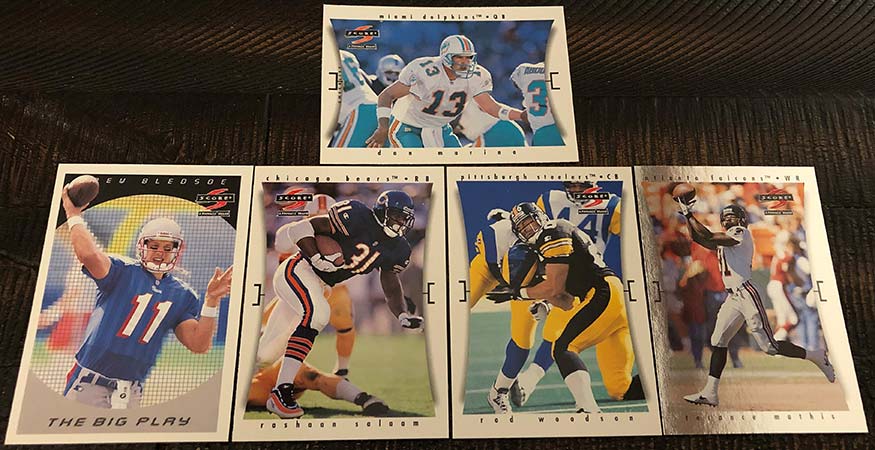 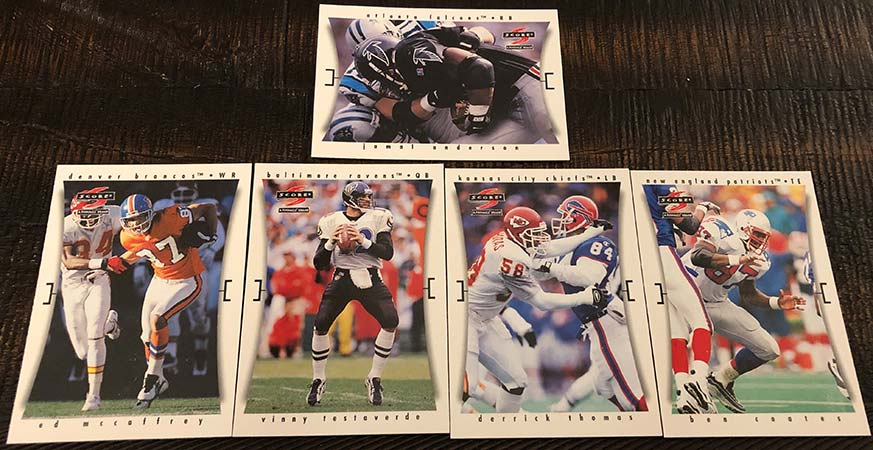 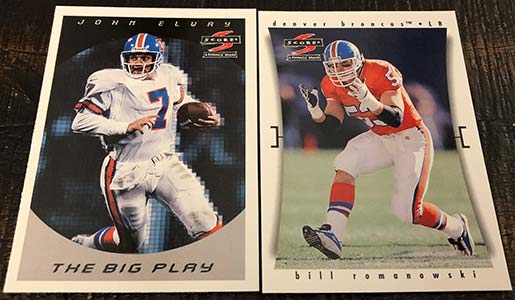 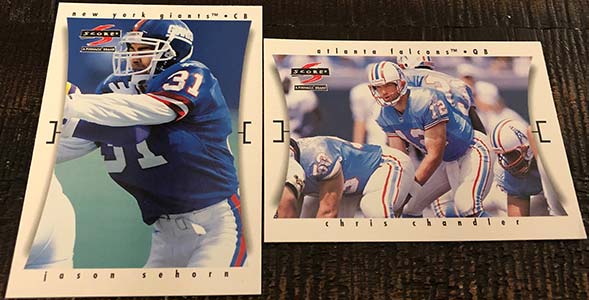 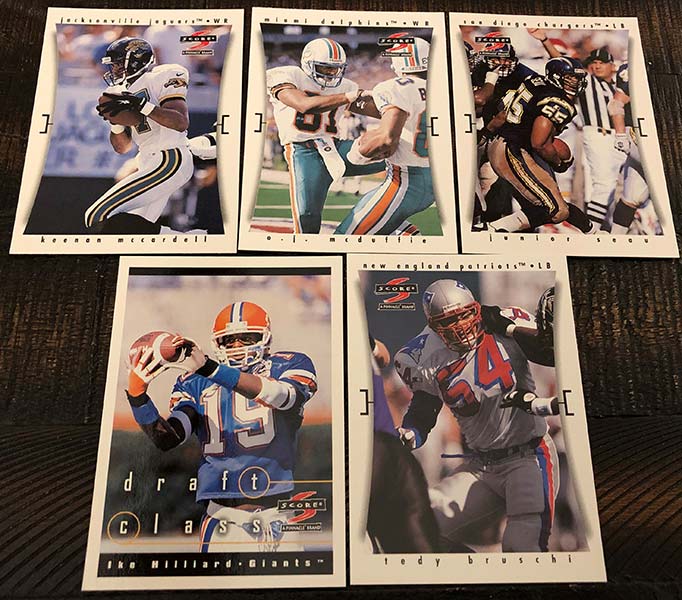 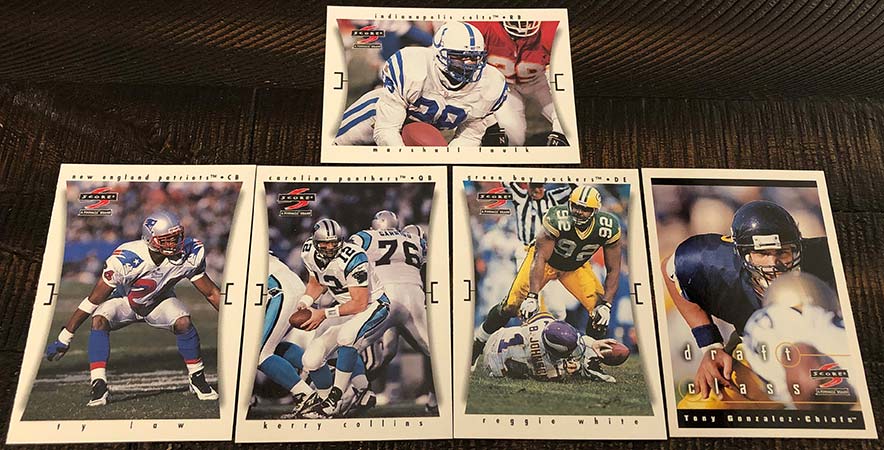 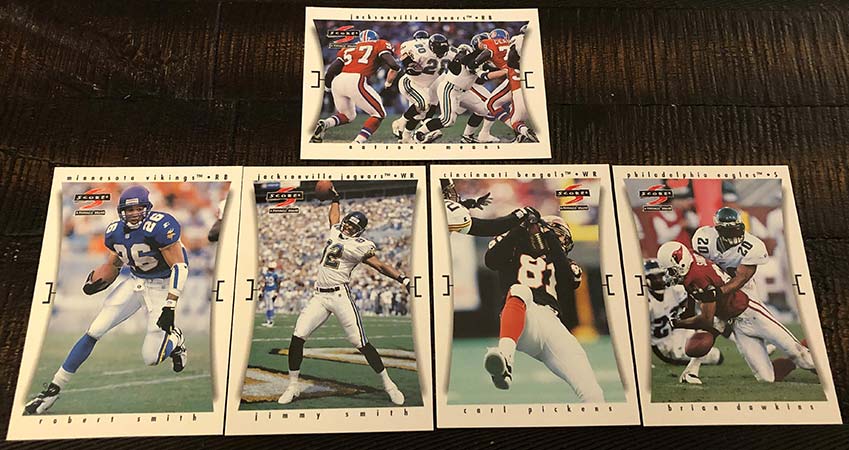 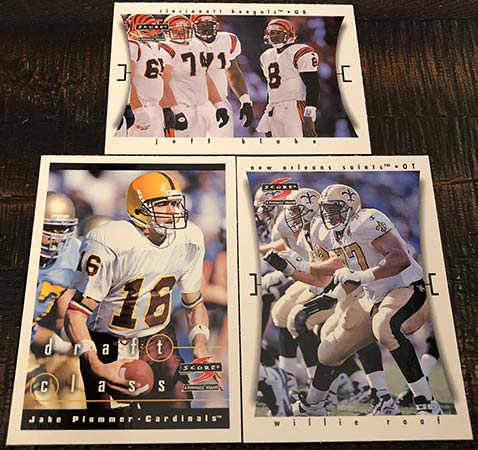 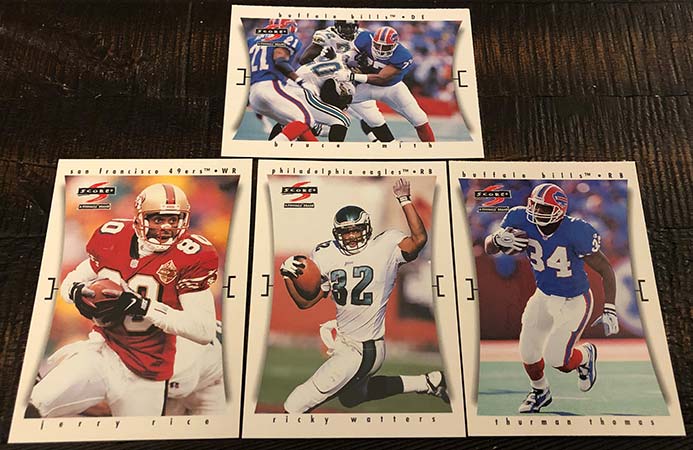 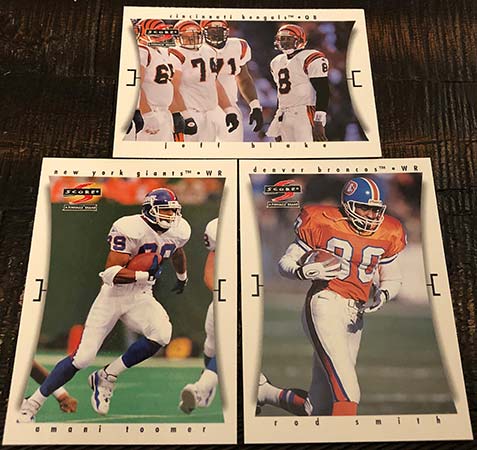 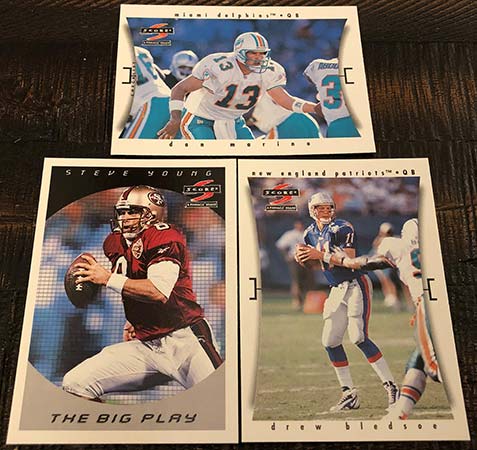 Lastly, the Marvin Harrison card back. That is some in depth stat breakdown of Harrison’s 1996 season! 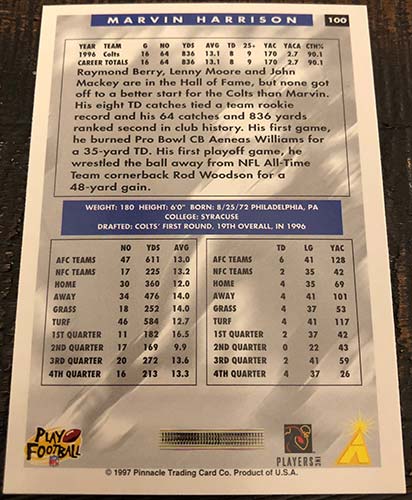 Not a bad break, at all! I was lucky in pulling two Artist’s Proof in this one. My luck in constantly pulling Emmitt Smith inserts also continued when I pulled his New Breed insert. I am always up for adding new Emmitt cards to my collection!

I don’t mind 1997 Score Football’s design. Score has always been on the cheaper side of products and, to me, this one lines up with that. Like I said above, though, the Artis’s Proof cards are excellent, and the inserts look good as well. At less than $1 per pack, I would consider grabbing another box of this one.

Side note: this post marks my 300th straight week with a different cheap wax break! Before Beckett started hosting these for me I posted them to my own blog. To celebrate this milestone post, I will be running a giveaway on my Twitter page. Be sure to enter!