When you think of Stan Lee, it’s comics not cards that you’re likely to think of. Heck, terms like “Excelsior,” and “No Prize” will probably come to mind before Stan Lee trading cards. But there are plenty of cards out there. 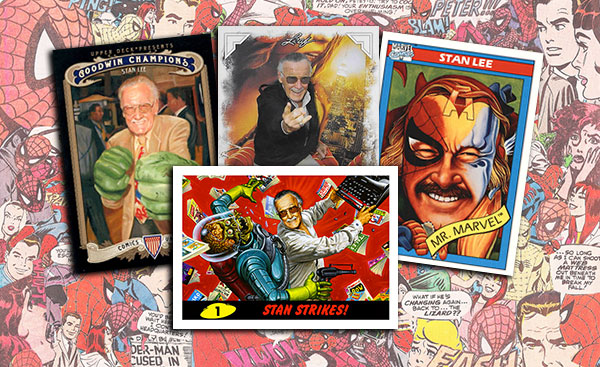 Look around today and a lot of the characters he helped create are there. From blockbuster movies to toys to T-shirts to comics, the Marvel Universe Stan Lee had a hand in building has reached massive heights. He has long been the biggest cheerleader for super heroes being a big part of pop culture. It may have taken for Spider-Man, Captain America and Iron Man to truly hit the mainstream, but they most certainly have.

And even when comics were still considered something for the fringes and the punchline in jokes about geeks, Stan Lee was considered cool thanks to his natural charisma and enthusiasm. Just listen to him talk for 30 seconds and you’ll get it.

Stan Lee trading cards can be found in a lot of places. He might not have tens of thousands of different cards, but there are still plenty to be hunted down. And just like the man himself, dull isn’t a part of the conversation. 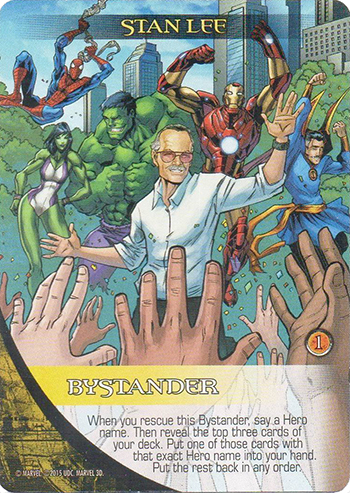 The streams crossed in 2015 Upper Deck Marvel 3-D. In addition to the regular base set, Upper Deck integrated new Marvel Legendary cards that could be used in their deck-building game. And just like he does in virtually every Marvel movie, there’s a Stan Lee cameo. 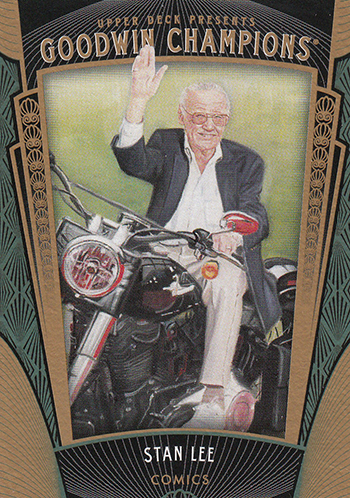 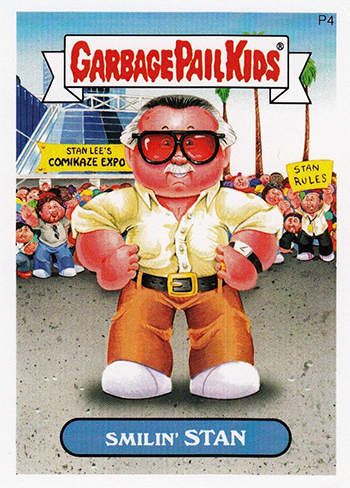 Technically, this isn’t a Stan Lee card. But it totally is. It’s also one of the most polite Garbage Pail Kids ever made. It comes in a couple of different versions, all of which are popular. #P4 was inserted in the deluxe edition of one of IDW’s GPK comic books. An over-sized version of the card, #CC13a, was also available at the show. Finally, it was included as a Bonus Sticker (#B1) in 2015 Topps Garbage Pail Kids Series 1. 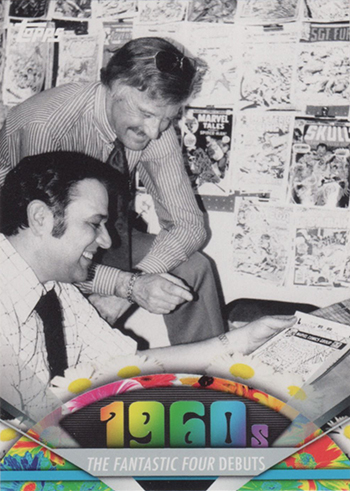 If you’re a fan of Stan Lee, you’re likely a fan of comics history. And this card has a lot of it. There’s Lee and Jack Kirby planning out a book with plenty of art decorating the walls. While there might be some controversy involving that art and who deserves credit where, that shouldn’t take away from the historical nature this card evokes. 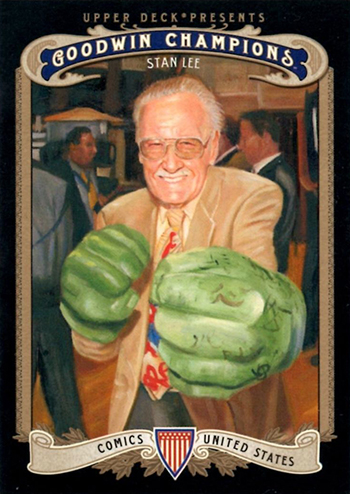 Upper Deck Goodwin Champions is one of those brands where you can find a lot of personality in the images. And when that personality is as big as Stan Lee’s, there’s an added challenge. When I see those Hulk hands in the store, I always wonder why they were made in the first place. This shot finally gives them meaning. 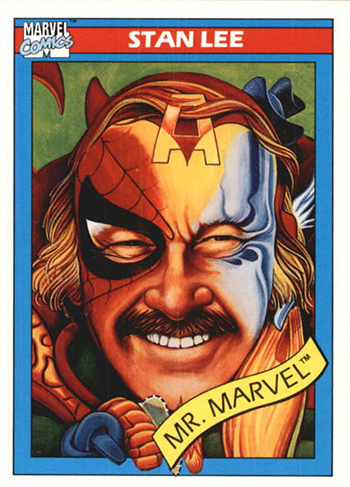 As far as comic cards go, 1990 Impel Marvel Universe is probably the most collected set ever. And while there are tons of great cards on the checklist (even if they’re not worth much), it’s the Stan Lee tribute that tops them all. His face has been morphed with some of the biggest characters he’s helped bring to life. The result is a mix of strange and amazing. 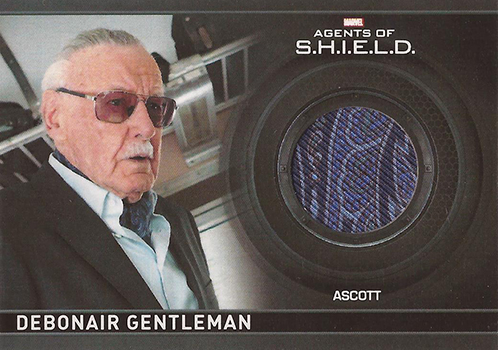 Today, not many people can pull off an ascot. But Stan Lee can. His part in the first season of Agents of SHIELD might not have been a big one (they never are), but it resulted in one of the coolest Stan Lee trading cards ever. The costume card is numbered to 350 and full of great patterns. 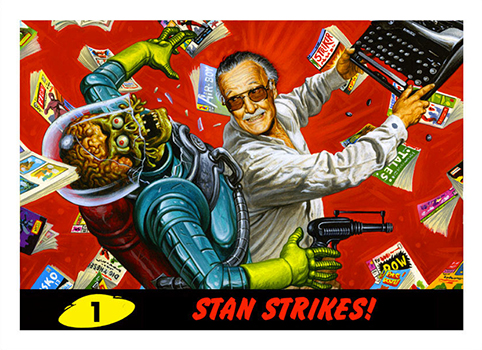 Historically, Mars Attacks and Stan Lee don’t have much in common. But when you bring the two together, the results are epic. This promo card, which was available only at the 2013 Comikaze Expo, is done in the classic Mars Attacks design and has Lee taking out a Martian with his old-school typewriter. Limited to 2,500 copies, the painting is by Joe Jusko, adding another layer of cool.

In addition to the promo card, prints of the artwork were also sold at the show, some of which were signed by Lee and Jusko. 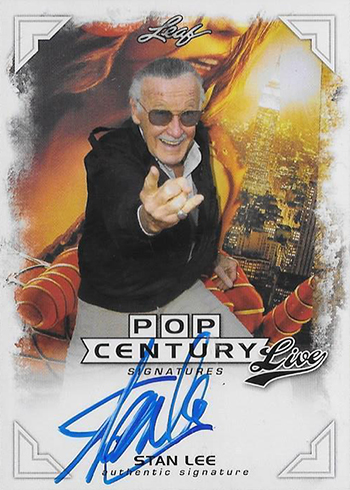 Stan Lee’s signature has been on a lot of different cards over the years. Some are comic-themed while others come from his short movie role. He’s also no stranger to celebrity-themed sets. No matter the case, a Stan Lee autograph is a Stan Lee autograph. Some might be worth more, but all are great. 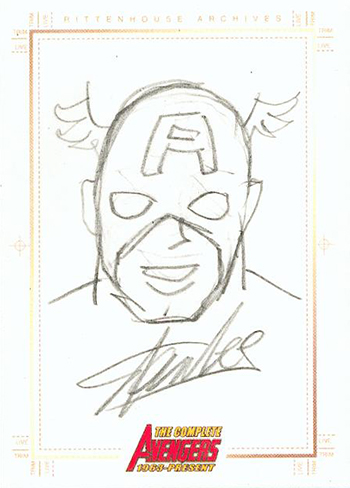 Okay, so it’s more of a doodle, but it’s a Stan Lee doodle. Limited to 100 copies, these are some of the only time the comics icon has done sketch cards for a product. He also did a few for the classic 1998 Marvel Silver Age set, which could also be included here. It’s kind of like comparing the worst Picasso ever did with a detailed painting from the anonymous artist hawking their work down on the street corner. This is a card that isn’t so much about quality as it is who did it.