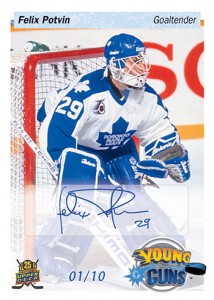 The 48th Sportcard & Memorabilia Expo is just two weeks away and Upper Deck has just revealed their elaborate plans for this semi-annual event that draws in hockey collectors from all over the world.

Recently, Beckett delivered news about the company’s tried-and-true Priority Signings promotion and these 25th Anniversary Young Guns Tribute cards share the same design as those that were found in high series packs back in 1990-91. The lineup for signers is quite impressive and the redemption program will be running all three days of the show (November 7 to 9, 2014).

What cards could collectors potentially receive and what else does Upper Deck have planned? Find out after the jump.

The 25th Anniversary Young Guns Tribute Priority Signings promotion is scheduled to begin at 5:00 p.m. on the first day of the Expo and supplies will be limited and spread out over all three days of the event. On Saturday, the redemption will begin when the show opens at 10:00, but there will be a special Happy Hour later in the day (5:00 p.m.). The show ends on Sunday, and the final opportunity to pick up these cards will begin at noon.

In order to qualify for a Priority Signings card or an Upper Deck Authenticated Rookie Memorabilia instant win card, collectors much purchase a sealed hobby box of 2014-15 Upper Deck Series One, 2014 Upper Deck Team Canada World Juniors, 2014-15 Artifacts Hockey or 2014-15 Fleer Ultra Hockey, or a pack of 2013-14 Ultimate Collection Hockey from a Certified Diamond Dealer that has set up at the Expo. When the box or pack is purchased, they will receive a voucher and it can be taken with the sealed box to the Upper Deck booth in the corporate area. Each redemption window typically lasts two hours, but it is limited to one box per person each day.

The 25th Anniversary Young Guns Tribute Priority Signings checklist includes many top names from the past and present and the players in the set are limited to the following quantities: 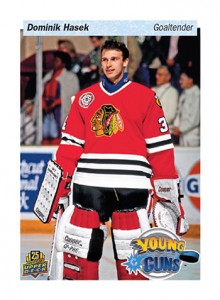 What can collectors do at the Upper Deck booth during the time outside of the Priority Signings redemption? Well, they can still bust open a box of cards in order to receive a special unsigned 25th Anniversary Young Guns Tribute Rookie card featuring some big names on the classic design. Diamond Dealers will give customers a special voucher when they purchase any of the eligible boxes or packs listed above and they can be broken at the booth for one of these limited cards.

Alternatively, those choosing to break a tin of 2013-14 The Cup will also be given a card. These are limited to 10 cards per person per day and the nine-card checklist features Jonathan Quick, Kris Versteeg, Martin St. Louis, Doug Gilmour, Trevor Linden, Guy Carbonneau, Daniel Alfredsson, Martin Brodeur, and Curtis Joseph. It’s interesting to note that all of these players never had a Young Guns card for a variety of reasons, so this is an interesting treat for collectors.

For those that were preferring to bust cases of 2014-15 Artifacts, 2013-14 Ultimate Collection or 2013-14 SP Authentic will receive two exclusive Priority Signings cards featuring black borders or an Upper Deck Authentic instant redemption along with another bonus premium item. They will also be given a special Upper Deck 25th Anniversary toque. The case breaker promotion is limited to one break per person each day.

The checklist for these cards is impressive and no card is limited to more than five copies.

If you’re a collector who is not interested in waiting in a long line to bust boxes, Upper Deck offers up plenty of other options that are sure to please. If a collector brings over two packs of 2014-15 O-Pee-Chee Hockey or 2014-15 Upper Deck MVP Hockey at any point in the show, they can have their photo taken and it will be put on a special Young Guns card that is printed before their eyes. There are also free raffles held on Saturday (12:30) and Sunday (2:00) and even a special draw for expired Upper Deck redemption cards. To be eligible for the latter raffle, cards must be submitted to the booth by 1:30 on Saturday before prizes are drawn at 2:30 the next day.

There will also be a special Random Acts of Kindness Scavenger Hunt which sees Upper Deck hide 25 seasler envelopes throughout the International Centre and there will be a station to share clues at their booth. Once a collector has tracked down an envelope, they can exchange them for a prize (with a limit of one redeemable envelope brought to the booth each day). 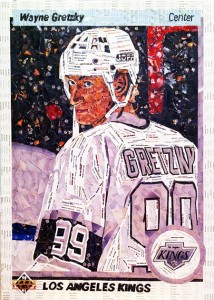 Fans of sports art will be pleased to see that Tim Carroll will be coming to the Expo and his works that feature cut up pieces of trading cards have built a strong following in recent years. He will be working on another piece live at the show and is happy to speak with collectors about the process he uses to create these drool-worthy collages.

For dealers and collectors, there will be a special one-hour welcome reception on Friday night at 8:00 which will be hosted by Upper Deck’s product development and marketing staff. In order to secure a spot at this event, the company would like to receive reservation requests via email at UpperDeckMarketing@upperdeck.com. Potential attendees should provide their full name, address and telephone number in the message along with noting what their favorite team is and stating why they are interested in attending. Upper Deck will review the requests they receive and send out confirmation messages to those chosen to participate.

A show of this nature is always concious of the need to build the future of the hobby and Upper Deck has sponsored the Kids Day promotion that sees children between the ages of 6 and 12 get in for free when attending with an adult. They will also be given a voucher that can be brought to the booth and traded for a special hockey card.

Football collectors should not feel left out of the action, either, as anyone who purchases two sealed boxes of the new Upper Deck CFL product can receive a limited edition uncut sheet that is sure to be treasured by fans of the Canadian game.

One of the most impressive things that the company is doing for the show, though, has to be charitable drive for Movember Canada. Upper Deck staff will be accepting donations at the booth and all of the proceeds will be going directly to the organization. Each donor will also be rewarded with a free mustache for their generosity.