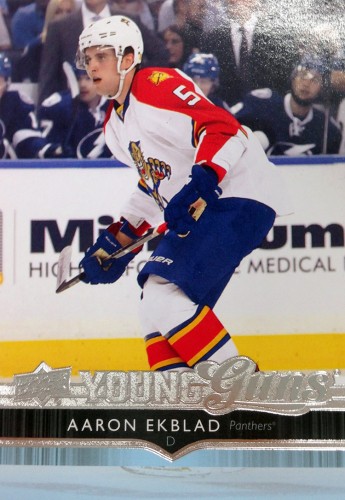 The 2015 NHL Entry Draft is still a little over two weeks away, but Upper Deck is preparing to be a part of the annual event and will be offering fans and collectors an opportunity to win some prizes and appear on their own official trading card.

Held on June 26 and 27 at the BB&T Center in Miami, Florida, the company is also giving those in attendance a rare treat with the chance to meet one of the NHL’s top young stars in last year’s first overall pick, Aaron Ekblad of the host Florida Panthers. The young defenseman and Calder Trophy candidate will be at their booth on the second day from 10:00 to 11:00 a.m. and will be signing an exclusive oversized 5″ x 7″ card.

What else does Upper Deck have in store for this event? Find out after the jump.

In order to receive a personalized trading card that is printed on site, collectors will need to purchase two packs of 2014-15 releases that include O-Pee-Chee, Artifacts, Upper Deck MVP, Fleer Ultra or the flagship Upper Deck brand at the company’s booth or the team store. Once they open their packs, they can exchange them with an Upper Deck employee and their cards will be made.

Upper Deck is also bringing along its popular Puck-O game and collectors can bring two sealed packs of either 2014-15 Fleer Ultra or 2014-15 Upper Deck to get a chance to play for a prize.

Naturally, Upper Deck will also have its Athlete Relations Team at the draft and they will be busy taking photos of the NHL’s future stars that may one day appear on trading cards.

Local collectors may also be interested to know that Upper Deck will be hosting a special Silver Celebration event at Scott’s Sports Cards at 6724 North University Drive in Tamarac, Florida on June 25 from 6:00 to 7:00 p.m. In addition to refreshments, there will be free pack wars plus a raffle that is based on the amount of Upper Deck product purchased that day at the store. The prizes will include such items as sealed product and signed memorabilia that includes a blow-up card autographed by Wayne Gretzky.