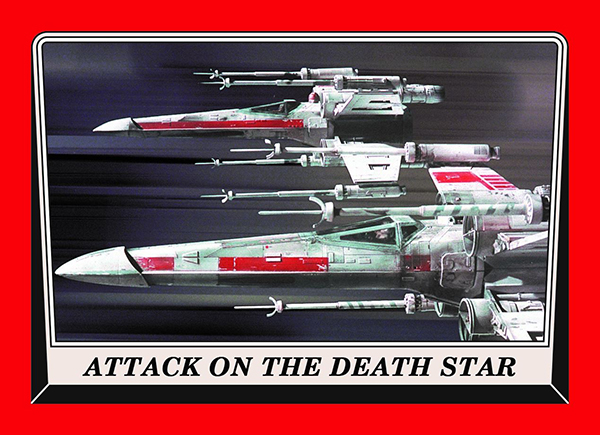 Of course Rogue One trading cards are coming. Although they’re keeping mum on full details — for now — they have formally announced that Road to Rogue One is coming in the fall.

So far, not much is known about the first set for the Star Wars spinoff. But it looks like the road the product is taking might be a similar to one 2015 Topps Star Wars: Journey to the Force Awakens.

That set helped lay the groundwork for a larger push that came when Rey, Finn, BB-8 and the rest of The Force Awakens cast hit the big screen in December. It covered a lot more than just the new film. Don’t be surprised if Road to Rogue One does the same, looking at how the film fits into the greater Star Wars puzzle.

Judging by the one base card image that’s been released on the Topps Star Wars Facebook page, there’s a Heritage look (and feel?) happening. It’s based on the original design of the 1983 Topps Return of the Jedi trading cards.

2016 Topps Road to Rogue One is scheduled to release in October. The film comes out on December 28 and stars Felicity Jones, Mads Mikkelsen, Forrest Whitaker, Alan Tudyk and Donnie Yen.

We’ll have lots more on the set once it’s announced.