The new standard expansion for Magic: The Gathering will be upon us at the end of September and spoiler season is in full swing. Today we are going to look at the top five spoilers in the set that will impact both the meta and the market.

The allied shock lands are coming back to standard and getting their first reprint since Return to Ravnica’s release in 2012. The shock lands allow unique deck building to occur within standard as it provides a more stable mana base for decks to use. This is especially since the check land cycle also remains legal in standard with Guilds of Ravnica’s release.
Expect the price for each to range between $7-$13 apiece. 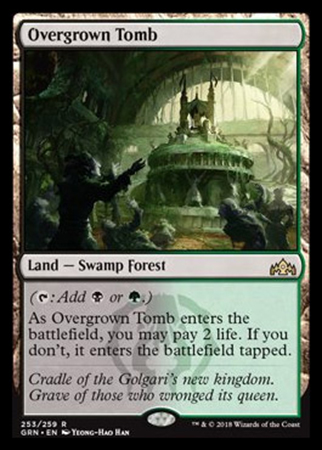 Met with a bit of controversy at its announcement, Guilds of Ravnica is offering a separate unique box called the Mythic Edition. This box contains 24 packs. In eight of them are unique versions of eight Planeswalkers. This gives players a chance to get some older Planeswalkers in a nice version.

These boxes also make a different sort of draft as each Planeswalker pack will be marked.

These boxes will be exclusive to Hasbro’s website with a limit of two per customer. Each box costs $240. This could lead to many of these cards maintaining a solid secondary market value. 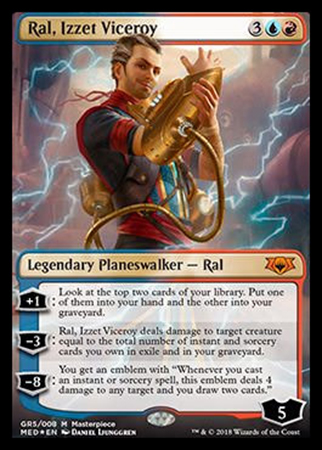 Nullhide Ferox is an awesome 4 mana 6/6 creature with Hexproof that comes into play if it is discarded by an opponent’s effect. Additionally, any player can pay 2 mana to have it lose all abilities.

You get all of this at the cost of not being able to play non-creature spells, which appears to be a small price to pay for such an efficient creature that has protection. This forces opponents to pay an extra 2 mana for any spell that can potentially remove the Ferox.

Expect to see this card make its way into many standard decks. 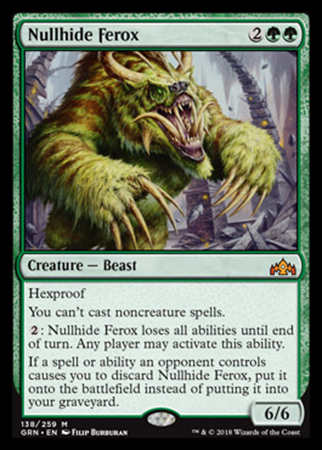 Doom Whisperer is an extremely efficient creature. It’s one of only a few large, cheap creatures to be released with no real drawback.

For 5 mana you get a 6/6 Flying and Trample creature that also lets you pay 2 life to Surveil 2. This allows you to filter your draws and fill your graveyard.

This card will be a nice finisher for the upcoming standard format. Fortunately, the number 1 card will be able to keep this card in check. 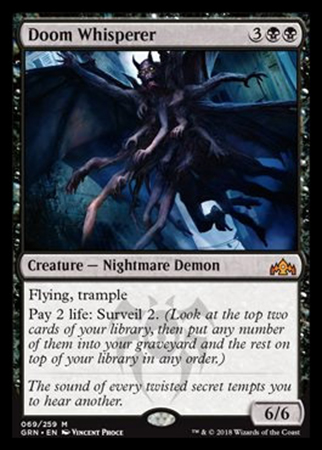 Assassin’s Trophy is one of the best pieces of removal to come into the Golgari Guild since Abrupt Decay’s release back in 2012.

For 1 Green and 1 Black you can destroy any target permanent an opponent controls. This means Lands, Artifacts, Planeswalkers, Enchantments, and, of course Creatures. As a balance, the opponent gets to play a basic land from their deck.

Expect to see this card not only in standard decks but, potentially, all formats with decks that play Green and Black.

Currently, Assassin’s Trophy is pre-ordering at over $30. Be sure to get your copies when you can as this is a must-have for many Jund/Junk/Golgari decks. 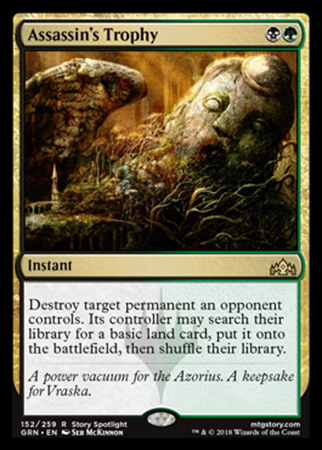