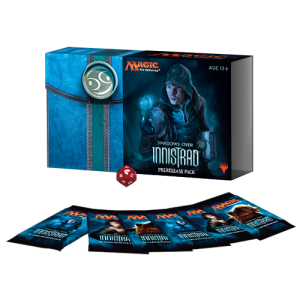 Shadows over Innistrad Pre-Release is nearly upon us. Starting April 2, gamers will have a chance to crack in to the new and exciting Magic the Gathering set. The set includes 297 new cards and is the first set in the Shadows over Innistrad block. Today we will look at some of the popular Mythic Rare cards you could get in your pre-release kit. 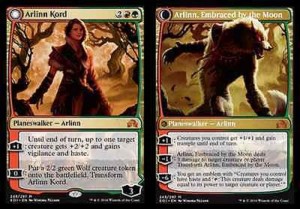 Number 1 on the list is ArlinnKord/ Arlinn, Embraced by the Moon. This card is packing a ton of different effects and falls in line with Garruk, Relentless as one of the first Transform Planeswalkers (excluding the Origins creature walkers). On her casting side, Arlinn grants one of your creatures +2/+2, vigilance, and haste. This provides a Pseudo protection for herself since it gives a creature vigilance while maintaining pressure on your opponent. The 2nd effect creates a free 2/2 Wolf token and then transforms Arlinn. Transformed Arlinn’s first effect grants all your creatures +1/+1 and trample. This effect can be huge in limited and is one of the reasons for many players to get rid of her in constructed play. If left unchecked Arlinn can win the game for you. Her 2nd effect allows you to Lightning Bolt your opponent or a creature and then transform her back. This effect is also extremely useful and provides easy removal against agro decks or allows you to get that last bit of life damage to your opponent. Her ultimate is good, but at the same time a little redundant. If you manage to plus 1 3 turns in a row, you probably have won the game and are just going for style points. All in allArlinn is a very exciting and powerful walker, be sure to hold on to yours if you are lucky to pull her at your release event! 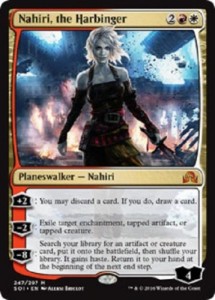 The next exciting Planeswalker to make its way out of Shadows over Innistrad is Nahiri, the Harbinger. At first glance she is a 4 mana walker that comes in a 4 loyalty. Her +2 ability lets you discard a card and then draw a card. Card cycling is never a bad thing, on top of that this effect can trigger 2 of the major mechanics in the new set Madness (which lets you cast a spell for a different cost if it is discarded), and Delirium (which generates an effect based off card types in your graveyard). Her next ability allows you to exile an enchantment, tapped artifact, or tapped creature. This effect is very good if you are going 2nd since you could slam Nahiri turn 4 and exile the creature that just attacked you. Her ultimate effect is pretty crazy and if left unchecked could be devastating to an opponent. I like the idea of being able to cheat out an Ulamog the Ceaseless Hunger. In other formats this just gets even more crazy. 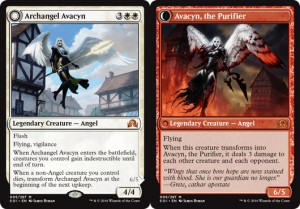 It wouldn’t be Innistrad without Avacyn. Archangel Avacyn is the latest rendition and she has some cool effects and flavor. For 5 Mana you can cast Avacyn on either player’s turn thanks to her Flash ability. She has flying and vigilance allowing you to have a constant blocker. She also acts as a Fog for all your creatures when she enters the battlefield giving them all indestructible until the end of turn. Her last effect transforms her whenever one of your non-angel creatures dies. On her flip side Avacyn becomes the Purifier! On top of a stat boost, Avacyn will deal 3 damage to each other creature and each opponent. Avacyn brings a lot of utility and it will be interesting to see in what decks she appears. 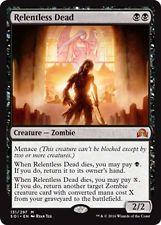 The last card we will look at today is Relentless Dead. For 2 Black Mana you get a 2/2 with menace. On top of that the zombie states whenever it dies you may pay 1 black to add it back to the owner’s hand. Lastly whenever Relentless Dead dies you may pay x, if you do you can place another zombie from your graveyard onto the battlefield. This card just screams combo! Maybe not in standard but I could see this doing something crazy in modern or legacy. Perhaps when set 2 of the Shadows over Innistrad block is released standard will be able to utilize this card more efficiently.

Be on the lookout for more news on Shadow over Innistrad. Make sure to mark your calendars for the pre-release weekend, as well as the set release.

What card are you most excited for in the new set? Comment down below.

Remember the Time Topps Did a Long-Play ...