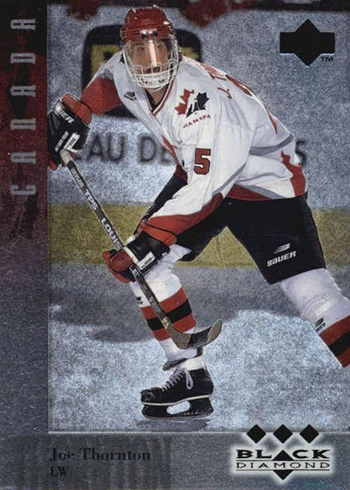 Joe Thornton has joined some elite company, scoring his 400th career goal. It’s not the most exclusive club with Thornton becoming the 97th member. It becomes a lot more impressive when you factor in his assists. The Sharks veteran is just the 11th player to tally 400 goals and 1,000 assists. He currently sits 16th on the NHL’s career points list.

A legendary man with a legendary career. Congrats to Jumbo Joe on joining the 400-goal club!

Collectors have just three Joe Thornton Rookie Cards to chase, all from Upper Deck during his time with Team Canada’s junior program. His 1996-97 Black Diamond RC is by far the toughest and most valuable. It’s one of 30 Triple Diamond short prints which combined to land 1:30 packs.

Given Thornton’s longevity in the game and the general scarcity of the card, it remains one of the key hockey cards of the late ’90s.

Never Settle Until You Find the Perfect ...