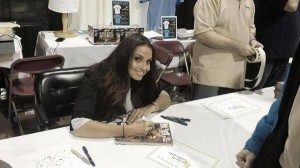 Another successful Sportcard & Memorabilia Expo came to a close Sunday evening and thousands of hockey collectors from all over have gone home after three days of hunting for cards and collectibles at the International Centre in Toronto.

Beckett Media was once again on hand for this semi-annual extravaganza and in addition to offering the latest issues of our price guides and annuals along with raw card grading services, managed to bring a lot of folks to our booth on Friday evening with a special appearance by World Wrestling Entertainment Hall of Famer Trish Stratus.

What else was going on at the Expo? Read on after the jump for an extensive recap. 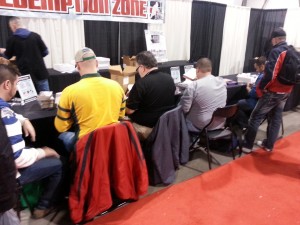 With the release of new hockey card products, manufacturer booths were often quite busy as collectors made sure to take advantage of redemption programs. Leaf‘s In The Game Ultimate Memorabilia 14th Edition was being broken throughout the show and those cracking boxes and cases were enjoying their bonus cards. As expected, they also displayed a strong selection of game-used jerseys and even had a promotional poster created for their upcoming 2014-15 In The Game Leaf Metal Hockey release. 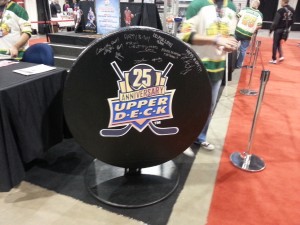 Meanwhile, Upper Deck‘s booth drew a crowd during the times set aside for their Priority Signings program. Some lucky collectors were also able to meet with the company on Friday evening and learned about their upcoming releases. There was a great deal of interest from collectors in having their own personal cards created and appearances by Hockey Card Stories author Ken Reid and some CFL players appeared to be successful.

Some of the collectors in attendance were all about meeting their heroes and it was all about some true legends on opening night as Johnny Bower was brought in by Leaf and In The Game to celebrate his 90th birthday. The former Toronto Maple Leafs goaltender is truly a treasure and the lineup to wish him well and purchase an autograph was long. Throw in a true NHL pioneer in Detroit Red Wings legend Ted Lindsay, who is just a year younger, and fans were coming away knowing that they had met a true icon. Be sure to look for an interview with Lindsay in an upcoming issue of Beckett Hockey and learn more about his contributions to the game.

Saturday’s signers brought in by A.J. Sportsworld included Mike Modano, who was in town ahead of his induction into the Hockey Hall of Fame, where he is set to join fellow guests Rod Langway and Yvan Cournoyer. The biggest line of the weekend, though, was for Bob Gainey, who was attending a public signing for the first time.

As the show wrapped up on Sunday, former Maple Leafs defenseman Al Iafrate and legendary on-ice pest Esa Tikkanen received a solid response along with Hall of Famer Larry Murphy, who was profiled in the December issue of Beckett Hockey. There was also interest from the public in meeting pro wrestlers Brutus Beefcake and Greg Valentine, but a signing from former heavyweight champion Riddick Bowe proved that boxing greats are near and dear to the hearts of collectors. 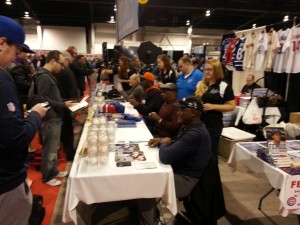 Once again, the Fergie Jenkins Foundation brought in some legendary athletes as well in order to raise funds. Retired baseball stars George Foster, Andre Dawson and Lee Smith were well-received by fans and they were joined by Hockey Hall of Famer Pierre Pilote, who won the Norris Trophy three times while playing for the Chicago Blackhawks in the 1960s. Pop culture icon and Harlem Globetrotters star Meadowlark Lemon was highly sought-after during his time at their booth, but he took a few minutes to speak to Beckett Basketball for an upcoming feature. Throw in an inspirational boxer like George Chuvalo, who fought Muhammad Ali twice, and it is safe to say that this booth was one of the show’s busiest throughout the weekend.

Finally, fans of old time hockey may have been surprised to see that retired players Jim Dorey, Gilles Gilbert and Steve Ludzik were in attendance signing autographs and promoting HSGC Sports, a company that has a mandate of “Players Helping Players” and aims to assist retired hockey players in nee and create sustainable revenue streams for them. Their passion for assisting others will be covered in an upcoming issue of Beckett Hockey.

For nearly 25 years, the flurry of activity at the Expo has created something special for many of us as it is not simply an opportunity to spend money on what we love, but also to reconnect with friends, meet our heroes and truly enjoy what this hobby has to offer. Promoter Al Sinclair and his team have consistently put on an excellent event that has changed slightly over time but still keeps most of the die-hards coming back.