Secrets of the 1989 Upper Deck Baseball Checklist and the Most Famous Ken Griffey Jr. Rookie Card 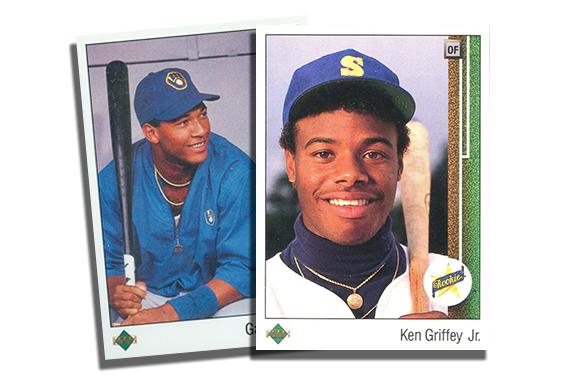 Even the most loyal fans of the 1989 Upper Deck set have had questions about certain elements of the checklist. In our interview with the man behind that checklist, Tom Geideman, we were able to get some of those answers as well as some bonus tidbits from behind the scenes of a card maker.

Beckett: So why 26 cards in The Star Rookie Subset?

Tom: I put together the structure of the set for the year, it was done well before I was even hired by Upper Deck Co. It originally included the idea of the top 26 draft picks as the first 26 cards, with a checklist card at #27 (there were 26 MLB teams in 1988). We realized quickly that we couldn’t do the draft picks so we substituted it with an Upper Deck version of “Rated Rookies”, this is where I used “Hot Prospects” as the working title. It eventually became Rookie Stars then Star Rookies. RCs drive each product so the top 26 RC were going to be put at the beginning of the set in a subset. In my head, the top player was going to be the first card of the subset and the last card would be the checklist – this would allow someone selling the subset of top rookies to just grab it and put it in a snap case for sale with the face of the best player on the front and the back showing the checklist of all the players included in the subset. Some of the guys that ended up in the Hi series, were targeted to be in the lo series. I wanted guys like Jerome Walton or Dwight Smith in the 26, but we just could not get photos. The original list is still pretty strong looking back.

Beckett: You had said you always wanted Griffey in the set. Was he always your plan to be card #1?

Beckett: Clearly not in the Topps model of numbering. So how did it happen?

Tom: The first form generated at Upper Deck was form 2 (cards #101-200), then Form 3 (201-300) up to form 7 (601-700). The last form produced was form #1 (1-100) because we knew getting the photos of the rookies was going to be hard (we had to use existing photography — no photo shoots — because the season was already over by this time). This is also the reason that Star Rookie cards have only 1 photo. So really the first card of the set was more like the last card included in the set from a production standpoint. This is why there wasn’t any real thought about it being the #1 card in the very first set on my part.

It really came down to designing a product with the top player on the top of the subset — which I laid out as the first 26 cards. When it came time to choose the #1 card in the subset Star Rookies there were more ‘touted’ players such as Sandy Alomar Jr. (son of Sandy Sr., Triple-A Player of the Year), Gary Sheffield (nephew of Dwight Gooden, Double-A Player of the Year) and Gregg Jefferies (reigning two-time Minor League Player of the Year, New York media darling and NLCS star). I looked at those three, plus Griffey (Single-A player of the year) and Griffey really jumped off from the rest. It wasn’t really close, and this is why. 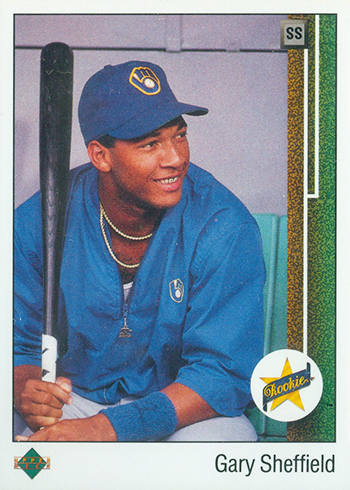 I didn’t think he had a chance to start the 1989 season in the majors, but I knew Fleer, Donruss, Topps, Score would have those other guys. We had Griffey images only because of photo wrangler, the amazing and accomplished photographer VJ Lovero was sent on assignment in March, 1988 to shoot Griffey Jr. with Sr. in San Bernardino, where Jr. was playing for the Spirit, for Sports Illustrated. I believe Sr. had an off day for the Braves (his team at that time).

So we had an image (a really clean image) and the ability to convert it to a Mariners uniform using the Scitex machine, a $1 million machine that was basically the Photoshop of its day that hardly anyone could afford to have.

I thought Griffey had the most upside. He was a true five-tool player (power, speed, batting average, defense and arm), and had an unobstructed approach to the majors. He was going to play in a small market without the pressure of having to produce day one. If he struggled to adjust (given less of a chance since he also grew up in the club house of the Big Red Machine) he’d have the opportunity to thrive before the national media set its sights on him.

But, the biggest thing is that I figured he’d be a mid-season (earliest) and sure-thing late-season call-up. That should have given 1989 Upper Deck an exclusive by default of Griffey (refer to Mark McGwire ’85 Topps, Benito Santiago ’86 Fleer, etc.). Keep in mind, too, Griffey played only 17 games at AA before getting hurt and being shut down for the rest of the ’88 season.

Best player in ten years, exclusive for one year, I thought, equals no-brainer for me. This is why Griffey Jr. was the #1 card, even though it was among the very last cards produced. 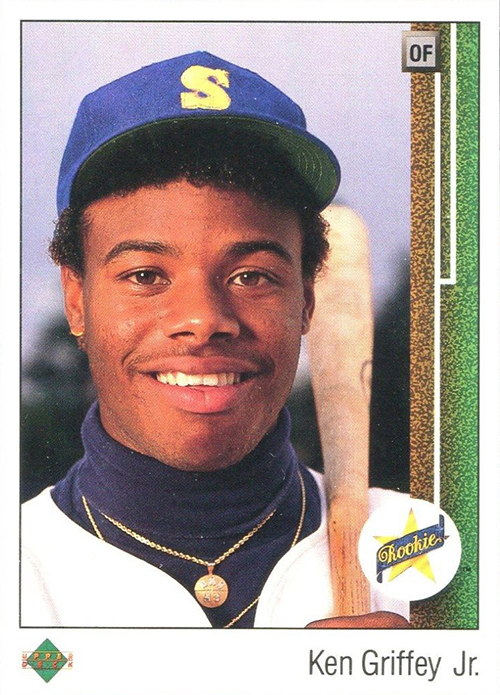 Beckett: Any regrets looking back?

Tom: Pretty clearly the big bust was #3 Tony Chance. He wasn’t even our first choice from the Pirates. His image was terrible, too. We had to mask out the background. When he didn’t pan out, we started to put our weakest choice in that #3 slot every year. In 1990 it was Tom Drees, in 1991 it was D.J. Dozier who was more of football player, and same in 1993 was Brian Jordan, at that time more of a football player. So that #3 slot was one of our inside jokes. 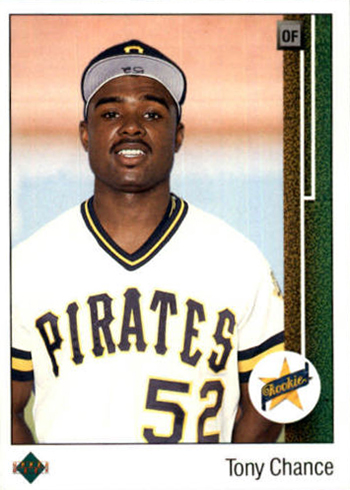 Beckett: Any other things you did intentionally with numbering?

Tom: Remember now, I grew up in southern California as an Angels fan. And we hated the Dodgers. They got all the coverage, and nothing on the Angels. It was torture, Dodgers everywhere, always the lead sports story. I hated them, and I was not alone. So when they won the 1988 World Series, we did the World Series Subset. The Gibson Home Run card just happened to be #666. 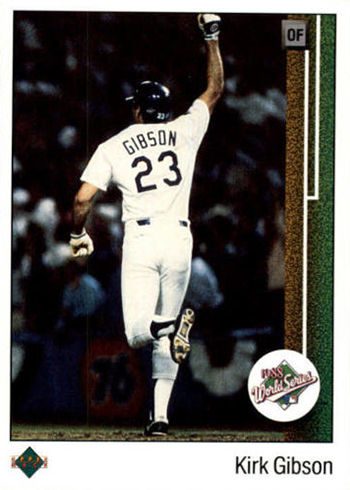 Beckett: There seem to be some common flaws on that card with paper creases. Was that just because it was the corner card on the sheet?

Tom: Yes and no. We wanted to paper to be the whitest it could possibly be. The only way to get that was in Europe. So the paper we used was actually imported. So the paper went through many temperature changes to get to southern California. And when we first started printing, we didn’t know anything about moisture and humidity control. I don’t think our original printer had air conditioning. As the paper would expand and contract, sometimes wrinkles and flaws would develop.

Another thing I witnessed was the way the printed sheets were handled. The pressmen would grab stacks of sheets, maybe 50-100 at a time and throw them on the press, and then stack them onto pallets. The way the grabbed the sheets was usually putting a thumb right on the Griffey. So I’m sure that had an effect. Most of those guys had never printed cards before. They didn’t think of it has having any value. Much different than the way things are handled today.