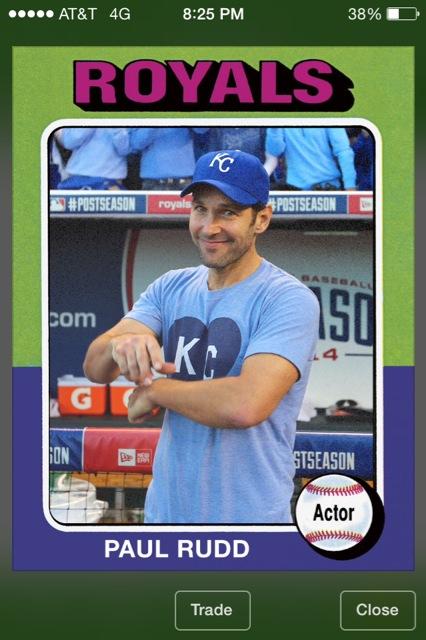 Actor Paul Rudd is a big Kansas City Royals backer and baseball fans have seen plenty of him on television as his team has marched to the World Series.

Now, thanks to Topps, they can get his baseball card — and all the company had to do was trade him a 1975 Topps George Brett Rookie Card to seal the deal.

Rudd has been added to packs of Topps Bunt baseball cards — the mobile app for iPhone and Android that has let collectors hunt for virtual cards and in some cases turn them into real money. (Yep, those who can’t pull them from packs buy the rights to them in online auctions just like the real cards.)

“Pretty fired up to be able to give Paul Rudd his own card in @ToppsBUNT!” tweeted Chris R. Vaccaro, who is the head of app operations for Topps Digital. “Awesome working with Paul to get this done.” 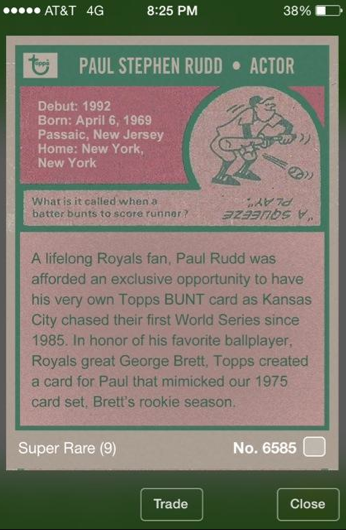 The card will be found in all Seventh Inning Stretch and World Series packs in the app. There are only 250 copies of the card to be found and they’ll fall roughly one in every 85th virtual pack.

Rudd has 89 acting credits on his IMDB resume, a list that includes his roles as Brian Fantana in the Anchorman films, This is 40, This is The End, Knocked Up, The 40-Year-Old Virgin and Clueless. His next notable role will be as Marvel Comics‘ Ant-Man, which should arrive in theaters next year.