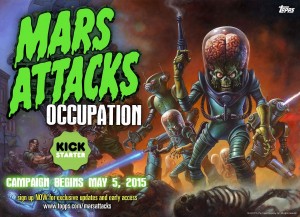 Mars Attacks has been one of the most iconic non-sports card sets over the last 50-plus years. From the original set in 1962 to the most recent iteration, 2013 Mars Attacks: Invasion, it has gained a cult following that so few original sets enjoy. Garbage Pail Kids and Wacky Packages are the only others that share this distinction. All three are owned and distributed by Topps.

Now, once again, collectors will see another Mars Attacks set. However, there is a unique twist: it will be a Kickstarter exclusive. The set itself is a follow-up to the Invasion story line and it is subsequently titled Occupation.

We spoke with Adam Levine of Topps and asked him to give a bit more insight into the product:

What was the motivation and/or inspiration behind this project?

When we released “Invasion” in 2013, there was always a plan in the back of my mind for a series of releases that kept the story-aspect of Mars Attacks moving forward. Mars Attacks is a great brand with a lot of passionate fans around the world, and it’s been a lot of fun working on the comics, toys, and games, but we’ve got to keep pushing the boundaries for the property, and that starts with trading cards, where it was “born.”

Why was Kickstarter the way to go for this product?

There’s a lot of great reasons for Topps to use Kickstarter, and of course the biggest is simply that as a more niche brand, it is sometimes challenging for us to find the resources to put together a project like this when things like Star Wars are such a big focus (especially with a new movie on the horizon). At the same time, we understand the value of continuing to develop our own properties, so we felt that the best way to be successful was to tap directly into the community of fans that are most excited about Mars Attacks. We also know we need to keep experimenting and innovating in terms of contents on Mars Attacks, and Kickstarter provides us with unique opportunities to do just that.

What details can you provide us about the set?

It will be a 72-card base set, with 18 chase cards, two hits per box that will include one guaranteed sketch, as well as autographs, super-rare metal reproductions of the 1962 set, letter-press cards and different levels of parallels, too. Of course, that’s just to start. We have some other ideas, and welcome input from the fans, and will have a lot to unveil over the course of the campaign.

Could we see Topps use this approach for some of its more mainstream brands in the future, such as Garbage Pail Kids or Wacky Packages?

I don’t know. Right now, this just made a lot of sense for Mars Attacks. There are currently no plans beyond this one.

We recently did a TBT piece devoted to Dinosaurs Attack, another Topps creation that has a devoted cult following. Could we see a possible Kickstarter project devoted to this series, as well?

Dinosaurs Attack is often considered to be Mars Attacks “spiritual successor” or “sister series” so there is a connection that we could exploit, perhaps sooner rather than later. A Kickstarter for Dinosaurs Attack cards, though? Anything is possible.

What do you feel are the advantages of this approach to building a project?

I think the biggest advantage is simply our production flexibility. With pre-orders via Kickstarter, we will know exactly how many people out there want this product, and exactly how they want it. This flexibility gives us added lead time from the campaign to delivery allowing our sketch artists, as one example, a lot more time to produce high quality work.

As noted in the photo above, the campaign for 2015 Mars Attacks: Occupation kicks off on May 5.