If you’re needing an Elite baseball product, Panini America is working on it and it will arrive early next year.

Specifically, it’s 2012 Elite Extra Edition and it will arrive in January packing as many as 10 autographs per box (thanks to Hot Boxes) and will include “more on-card autographs than ever before” according to the company. The lineup in this one will include 200 players — and more than 55 first-round picks from this year’s draft — with 100 autographed prospects.

Also back will be Aspiration and Status Die-Cut autographs in familiar colors — Red, Blue, Gold and Black — along with a new one, Orange, which will be limited to just 10 copies.

For game-used memorabilia fans, Panini also will include an insert with game-worn jersey from Carlos Correa, the first pick in this year’s MLB Draft.

The product also will include 20 Elite Series cards — also with autos — 20 Yearbook cards and 20 Diamond Kings. Just like last year, there will be short-printed Green and Red ink autograph variations, while new this year will be autographs and memorabilia cards of USA Baseball teams — the 18U National Team and 15U National Team.

For those wanting more ink and a tougher chase, there will be Building Blocks Dual autos limited to 49, Building Blocks Trios  (numbered to 25) and Pick 6 Signatures with six sigs. 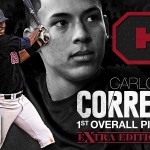 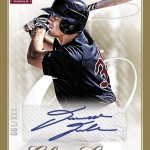 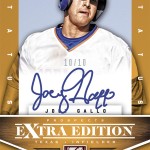 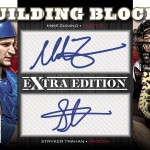 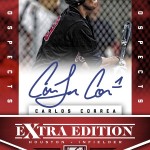