Topps‘ next wave of Bowman products will arrive late this year — 2011 Bowman Draft Picks and Prospects — packing yet another chance at a Bryce Harper autograph (this time Green) and plenty of this year’s top draft picks once they sign.

Each 24-pack hobby box will include one Chrome autograph, while there will be USA Baseball autos inserted as bonus sigs. The autograph checklist will consist of 31 draft picks and young stars each with SuperFractors, printing plates, Red, Purple, Orange, Gold, Blue and standard Refractor versions.

Meanwhile, this product will include the first look at the 2011 USA Baseball 16U National Team — the youngest prospects found on licensed cardboard. In addition to autographs, these cards will be found as SuperFractors, printing plates and more with the most plentiful being standard Refractors at just 199 copies.

New for this series will be Futures Game Relics with jumbo patch versions limited to just five copies, Futures Game patches limited to one and MLB Logoman 1/1s as well. Also included will be Aflac All-American autographs, Topps 60th anniversary sigs and more.

The prospect checklist is largely TBD — many of the draft picks have not yet signed — but the Aflac autograph lineup so far includes Yordy Cabrera, Stetson Allie, Tony Walters, Braxton Lane, Jason Thompson and Kyrell Hudson. 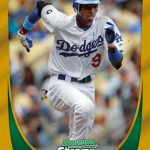 And in this corner: Ringside Boxing Round ...