Autographs combine to fall three per box. The large checklist of signers includes a couple of the show’s most recognizable star and an Oscar-winning actress with a recurring role in the series.

The 2015 Rittenhouse Star Trek: The Next Generation Portfolio Prints Series 1 base set has 89 cards. It takes on the half of the show’s episodes with never-before-published art by Juan Ortiz. The plan is to have the remaining 88 episodes make up a future Series 2 release.

Each of the cards has a Gold parallel. These combine to land one per box and have a gold facsimile signature from Ortiz. Also randomly inserted are parallels with authentic signatures from the artist.

More than 50 signatures can be found in the product. Headlining this list is Whoopi Goldberg who played Guinan. Winner of the 1990 Academy Award for Best Supporting Actress for Ghost, this is just the second set with Goldberg’s autograph.

Jonathan Frakes (Riker) and Brent Spiner (Data) are two of the other major signers appearing in 2015 Rittenhouse Star Trek: The Next Generation Portfolio Prints Series 1.

Autographs do come in a couple of different styles. The first is similar to the one used in other TNG sets from the card manufacturer. Silver Signature Series cards also appear.

Rittenhouse has confirmed the following signers as a partial list for the set. They expect more than 50 total autographs in the product.

Despite their prominence in entertainment trading card sets for more than a decade, sketch cards are actually quite rare in the Star Trek realm. Very few have been done for The Next Generation. But Portfolio Prints is changing that a little. Each case of the product has one sketch card with original art.

Here’s a tentative list of artists for 2015 Rittenhouse Star Trek: The Next Generation Portfolio Prints Series 1:

TNG Comics is a 40-card set that explores the 1989 comic series. These land one per box. TNG Comics Archives Cuts are twice as hard to pull. A panel from one of the original comics is embedded in the card.

Focusing on characters from the show, TNG Universe has nine cards with one inserted in every box.

The Next Generation has some interesting pieces of space travel. Some are given the spotlight in Ships of the Line (nine cards, 1:48 packs).

TNG Metal cards are case hits. Each of the ten cards are numbered to 100 or less.

A custom binder made specifically for the release has an exclusive promo card.

Rittenhouse makes case incentives a regular part of most of their releases. This one’s no different. Every case of the product comes with either a “Make It So, Number One” or “Ode to Spot” card.

Things get a lot fancier for the multi-case incentives. For every six cases ordered, there’s a dual autograph signed by Jonathan Franke (Riker) and Marina Sirtis (Troi). The nine-case incentive is a painted sketch card done by either Matt Glebe, Mick Glebe or Charles Hall.

Finally, there’s an Archive Box for the 18-case incentive. Details of its contents haven’t been announced.

2015 Rittenhouse Star Trek: The Next Generation Portfolio Prints Series 1 at a glance: 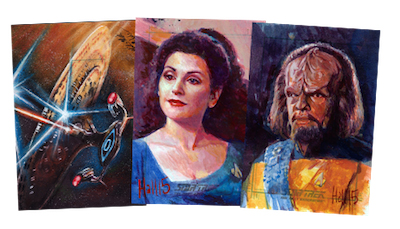