2020 Rittenhouse Star Trek Discovery Season 2 trading cards take a deep dive into the shows second batch of episodes. Besides offering a comprehensive look at every show, the checklist has several inserts that go even further. Autographs and memorabilia are in every hobby box, combining for three total hits. 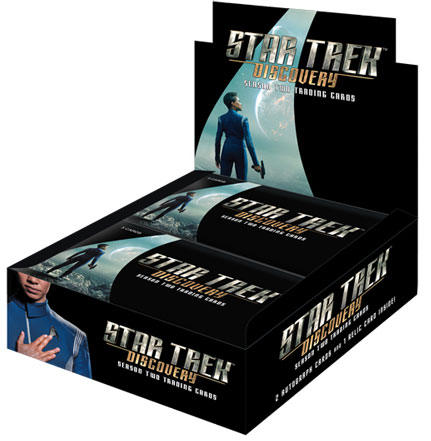 The base set anchors the release. Consisting of 84 cards, it works out to six per episode. That means recaps and images from key story points, developments and other plot points.

Autographs, which combine to land two per box, come in a few different forms. Besides the regular Full-Bleed design, Inscriptions, Dual Autographs and Autograph Relics are also possible.

Sonequa Martin-Green (Michael Burnham), the show’s lead, is among the signers on the checklist. Other regulars and key names include Ethan Peck (Spock), Michelle Yeoh (Phillipa Georgiou), Mary Wiseman (Sylvia Tilly) and Doug Jones (Taru). Comedienne Tig Notaro and Mia Kirschner are among the notable actors to get their first autograph cards.

In additional to the pair of autographs, boxes also have a Relic with a piece of memorabilia from the show.

Some of the other inserts use different materials to give them not only a different sort or look but feel as well. Nine Character Cards (1:96 packs) are done on acetate. Metal stock is the basis for both Expressions of Heroism (/150) and Starfleet’s Finest Painted Portraits (ten cards, /50).

The Opening Sequence Artwork cards that started in the Season 1 set get three expansion cards. These are among the tougher inserts, falling 1:96 packs.

Not all cards are available in packs. A Dual Autograph with signatures from Mary Wiseman and Bahia Watson is available to those dealers ordering six cases. An exclusive Sonequa Martin-Green Autograph Relic is the nine-case incentive. Finally, there’s a special Archive Box for those buying 18 cases. 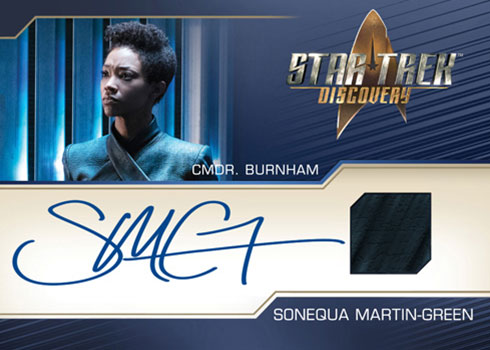 The following is a list of confirmed signers. It is subject to change and others may be added.