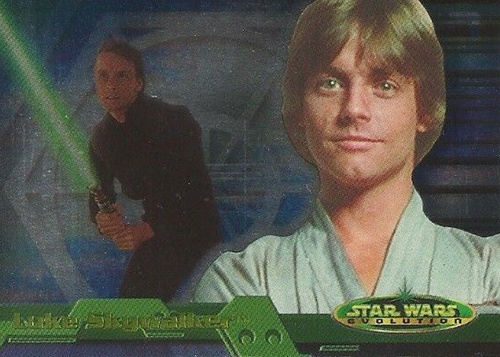 Following a busy 2015 where there has several sets of Star Wars trading cards (with a couple more still to come), it’s a safe bet that momentum will continue into next year. Nothing has been formally announced for the year outside of 2016 Topps Star Wars: The Force Awakens Series 2 in March.

However, a post on the Topps Star Wars Facebook page revealed the planned return of a line from a somewhat distant past — Star Wars Evolution.

The reveal came in a caption thanking Daniel Logan for signing for the new Evolution set as well as 2015 Topps Star Wars High Tek. The note also mentioned a planned release of May, 2016.

There have been a pair of Star Wars Evolution sets so far. Both were foil sets that focused on the changes characters underwent and the connections they have with each other.

2001 Topps Star Wars Evolution was important for another reason as well. It was the first Star Wars product to include actor autographs. Many of these remain some of the most valuable and sought after Star Wars autographed cards ever produced. Carrie Fisher, Anthony Daniels and Ian McDiarmid are at the top of that list thanks to the importance of their roles and the rarity of the cards.

When 2006 Star Wars Evolution Update came out, it followed the same overall structure and focus. It’s also the only set, thus far, to include Hayden Christensen autographs. However, those who busted packs and boxes back then might remember it for other reasons. A large number of the autographs came damaged with a gouge along the bottom edge.

The wonder years and 2015 Panini Contenders ...