The reason Matt Peek and Eric Christensen ventured into the hobby business is remarkably simple.

They are “sports nuts” who also know how to spot a market void.

A few years back, Peek was at Target picking up some packs of cards to open. His daughter, who plays youth soccer, noticed there were no women’s soccer cards. There should be, she noted.

“I couldn’t argue with it,” Peek said.

Peek and Christensen did more research and quickly found there was a significant portion of the hobby population “clamoring” for a new entity to enter the industry.

“There is a lot of people who would like to see the end of exclusive contracts [leagues licensing agreements] and open it up,” Peek said.

Peek and Christensen sought to fill that void, which led to the creation of Parkside Collectibles a few years ago.

Like any start-up, there have been challenges. Twelve-hour workdays are the norm. It’s a four-person team (Matt, Eric and two part-time graphic designers), so every person has lots of jobs and lessons learned. 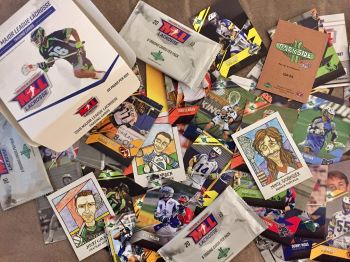 Parkside broke into the market with a licensing deal with Major League Lacrosse. Peek grew up with the sport. His brother played professionally. Although lacrosse is primarily known as an east coast sport, MLL has half its league far from the Atlantic Ocean (Atlanta, Dallas, Denver).

An established league in a growing sport made for the perfect partner for Parkside.

“We wanted to be known as company that does licensed products,” Peek said. “We want to be known as a trusted licensing partner. MLL really embraced our start-up mentality.
“We look at lacrosse as on the doorstep of being [one of the] most watched and participated sports in the country. It’s fast, physical and exciting as sin.”

It didn’t take long to recognize their product’s impact on the MLL landscape.

“The first picture of MLL cards being held by a little kid, it was so awesome,” Peek said. “Then we saw players holding cards to sign, you catch those faces [of kids in the crowd]. That’s what it is all about.” 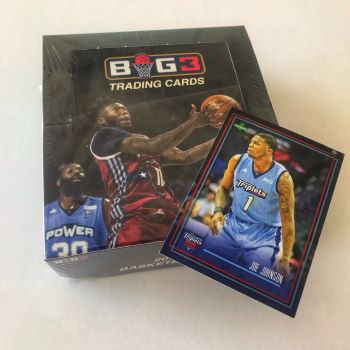 Soon after, Parkside nabbed an agreement with the Big 3, a 3-on-3 basketball league founded by rapper and actor Ice Cube. The league found success and a loyal following thanks to its half-court style and rosters filled with former NBA stars.

“[The Big 3] has taken over the summers of our lives,” Peek said. “Three-on-3 basketball is here to stay. It’s played on a global stage by some of the best players in world.”

Locking in with two ascending leagues is a good start for Parkside. But that’s all it is: a start. Expect a larger presence in the sports-card world (while maintaining high accessibility) and some entertainment options. Non-traditional collectors who like “off-the-wall” ideas will be especially pleased.

“Pay attention to us,” Peek said. “We are not going away.”