Most collectors don’t worry about what’s coming at the end of the trading card season just yet. Usually, we like to focus on the next coming product to gauge our interest if we want to buy or hold off until the next product comes out.

But Panini America likes to constantly tease it collectors with pictures and info from products that won’t be coming out until the spring.

It’s a way to build collector interest in forthcoming products, just as they did recently with 2011 National Treasures Football. The set is still in its relative infancy as cards are being set to players for their signatures – and there isn’t even a release date firmly placed on the cardboard calendar just yet.

But the design for its Rookie Cards was teased by the company recently. The horizontal cards feature the player on the right edge with a large preview window taking up the rest of the card. Inside the window are some impressive patches, showcasing names or logos from different jerseys.

The design on the edges of the window seem to have lines with the same dominant color scheme of the respective player’s jersey.

Along with the base cards, there are also gold and platinum parallels.

This year’s set will feature players such as Cam Newton, Jake Locker and Julio Jones to name a few.

National Treasures is one of Panini’s high-end products every year coming with a number of autograph and memorabilia cards in every box. 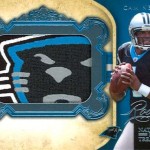 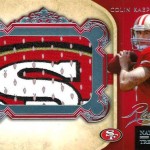 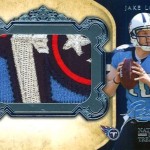 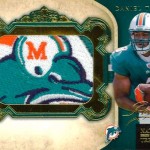