Fighting cancer with the support of the Fighting Irish 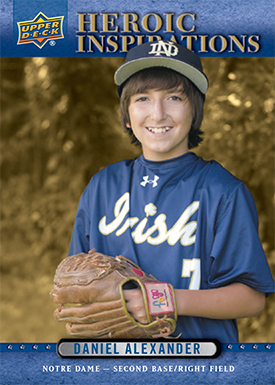 Daniel Alexander is braver than most people can fathom. He has been battling pediatric brain cancer for a significant part of his young life. But that hasn’t stopped him from being an important part in many peoples’ lives.

After Daniel was diagnosed, his mom looked for support. That led her to Friends of Jaclyn, a foundation that pairs children with pediatric brain cancer with local college and high school athletes. Daniel was partnered with the Notre Dame baseball team and made an honorary member of the squad. What started as a pairing has blossomed into something more like family.

Upper Deck added Daniel to their Heroic Inspirations lineup and made his own Notre Dame baseball card. The presentation came at the 2015 National on Wednesday where Daniel was joined by his parents, Notre Dame’s Brad Bass and Kevin DeFilippis as well as their families. 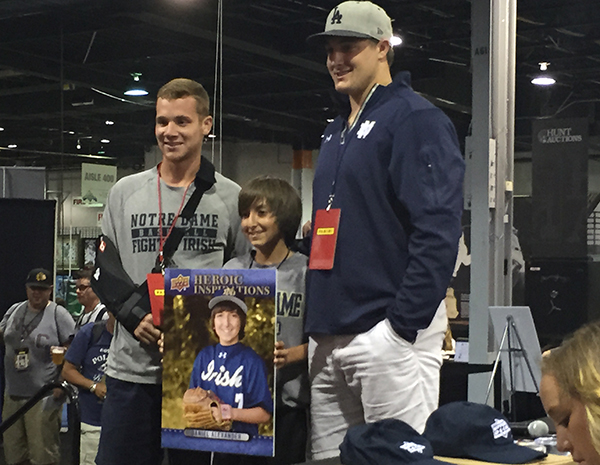 “I just think it’s awesome,” Daniel said when he was asked to describe what it felt like to have his own baseball card.

His parents and Fighting Irish teammates were all visibly proud as they stood in the crowd.

“For all the horrible things we’ve been through, so much good has come from it,” said Daniel’s mother, Karen Alexander.

She described how they were somewhat at a loss on what to do when Daniel was first diagnosed. But through their relationship with Notre Dame baseball, there has been so much support with both players and their families doing everything from offering words of support to being there for appointments. Of course, there’s also baseball-related things as well like games.

The feeling was a reciprocal one from DeFilippis and Bass. DeFilippis likened it to posters that are up in the team’s locker room. They’re meant to be inspiration with their messages but he sees Daniel and the courage he has shown over the past few years to be the embodiment of that inspiration. 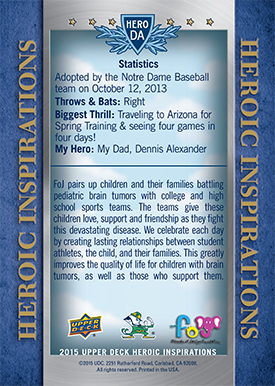 Upper Deck is creating a variety of cards of Daniel that will be sold to raise funds for the Friends of Jaclyn Foundation.