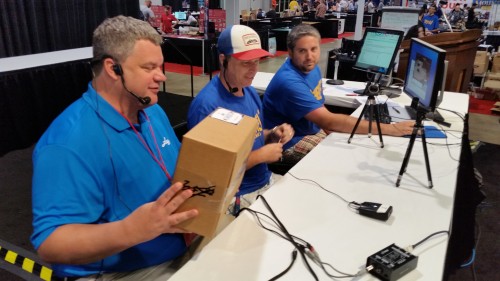 Boxes are being cracked open at a fast and furious pace in the Rippingwax.com Breakers Pavilion at the 36th National Sports Collectors Convention in Chicago this week and trading card manufacturers are taking to the Amazon Sports Collectibles Main Stage to show off their latest releases.

This morning, collectors in attendance were given an in-depth glance into 2015 Leaf Pop Century and the process of making the premium non-sports release courtesy of Brian Gray, President of Leaf Trading Cards, and representatives from Topshelf Breaks. Three lucky collectors in the audience was a free spot in the break and there were many big pulls that included one-of-one autographed press plates along with signed cards from the worlds of sports and entertainment.

“I’ve got to tell you, I’m really impressed with the Breakers Pavilion,” said Gray, whose favorite hit was the Gene Wilder autograph. “It’s improved year over year and no manufacturer should ignore it. A manufacturer that ignores the box breaker category is doing themselves and the hobby a real disservice. To see this many breakers who are excited and pumped, it’s good. For the customer it is to be able to buy in inexpensively without opening a case, which is something a lot of collectors don’t get to do because of the cost of cards currently. It’s something great to be a part of and we’ve got to keep pumping up this category. It’s important.”

Chris Keller of Topshelf Breaks also reflected on the breaking experience with Gray.

“I’ll tell you, for me personally and my business partner, Nate (Johnson), we’re kind of pop culture fanatics and I love sports. So, it was great to see the legends like Hulk Hogan, Ric Flair, and Sopranos actors. Beautiful set and a lot of fun. It’s great to see that the buying public is getting wind of the group break phenomenon. I think it’s still in its infancy, but I think it’s got a lot of room for growth. I think we’re all working together to make it better and better and honestly, we’re just happy to be here. Everyone’s working together to get the word out and there’s a lot of great products.”