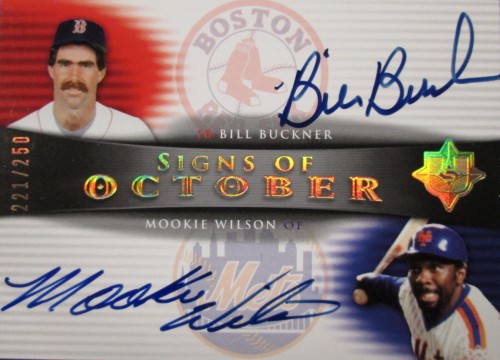 The 36th National Sports Collectors Convention is in full swing and the long lineups for autographs at the TRISTAR Autograph Pavilion from sports legends will continue on Thursday as over 30 athletes, including several members of the United States hockey team that won gold at the 1980 Winter Olympics in Lake Placid.

Among the other highlights of tomorrow’s lineup of signers are Bill Buckner and Mookie Wilson, who are forever linked because of Game 6 of the 1986 World Series when Wilson’s fluke hit bobbled past Buckner’s glove and the New York Mets defeated the Boston Red Sox for the title.

Who else is signing tomorrow at the National? Find out after the jump.

VIP show attendees will have the opportunity to get a free autograph from former MLB All-Stars Jon Matlack, who was the National League Rookie of the Year in 1972, and Ben Grieve, who won the American League’s version of the honor back in 1998. Later in the day, former Los Angeles Rams quarterback Vince Ferragamo will be signing for free for VIPs as well.

Collectors should note that due to scheduling issues, Tony LaRussa will not be coming to the National.

Here is the complete rundown of Thursday’s autograph guests:

Fighting cancer with the support of the ...