BGS Diary (May): A lone Michael Jordan 10, another Lana, a rare Yankee & one USA Baseball lineup 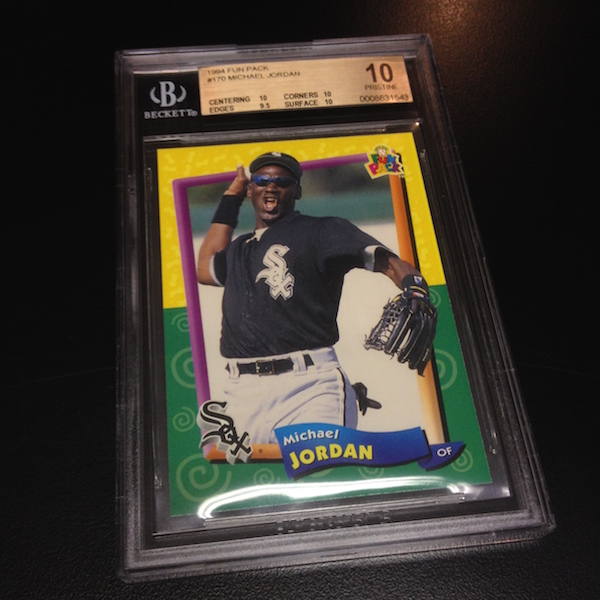 Here is the batch I got back from BGS for May — so here is my latest BGS Diary entry. See which cards I decided to submit … after the jump.

1994 Fun Pack #170 Michael Jordan RC, $10 (raw)
Last year, the card shop I frequent picked up a ton of older wax boxes and sold them for anywhere from $5 to $10. That got collectors like me ripping into stuff they hadn’t seen in pack form in a long time. One of those $5 boxes was this one from Upper Deck, and I picked up two of them just to see how many Jordan Rookie Cards I could find. Just like back then, this was the only one I found — but I knew it looked quite clean when I pulled it. It immediately went into a sleeve and top-loader awaiting a day with a grader. It graded well, and it was very close to a BGS Black slab, too.
Pop Report: This product is not big with graded collectors — just 88 total cards are slabbed and 58 of those are Jordan. There are 35 copies of this card that have received a BGS 9.5, while my card is the only BGS 10 that exists. So, that wasn’t bad for a $5 box. 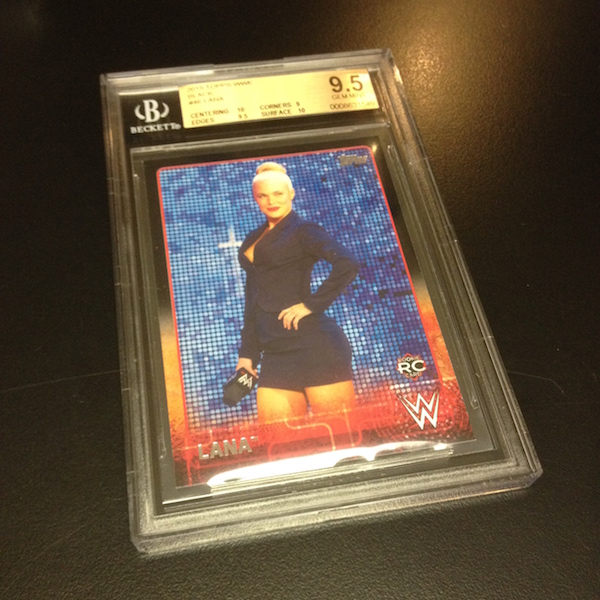 2015 Topps WWE Black #46 Lana, $30 (raw)
Not long ago, I submitted the standard version of this card and it came back with an impressive grade. When I pulled the parallel from a blaster box (you’ll get one, maybe two Black cards per box), I figured I’d go for a pair of BGS 10s. After all, this black-bordered card looked very close to perfect. Looking at it now, the upper left corner might have just a touch of fiber hanging off to prevent my 10 status. Overall, though, it’s still a fun card — and there’s been some drama for her character in the WWE lately. That’s added fun.
Pop Report: There are no other cards from this Black parallel set graded, meaning this card has not been topped on the pop report. 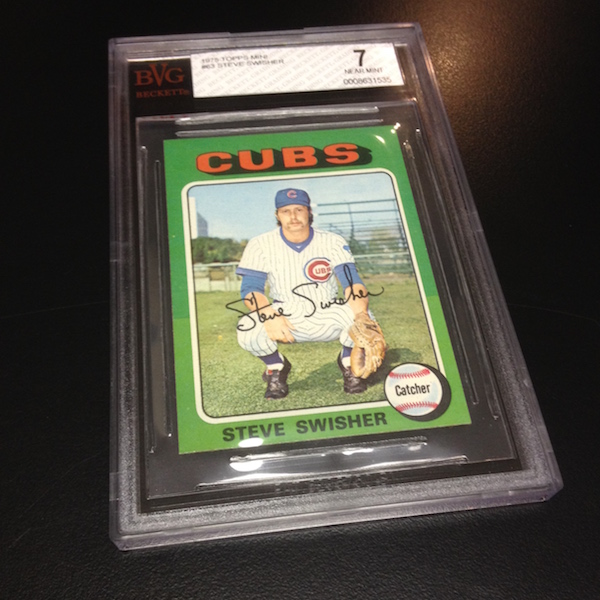 1975 Topps Mini #63 Steve Swisher RC, 75 cents (raw)
If you’ve tried to grade vintage, you know the challenges here. If you’ve ever tried grading 1975 Topps or the minis from that year you know it’s tough there, too. I knew this one wouldn’t be a contender for a perfect grade, but it was time for me to get the RC parallel of my favorite player’s dad into a slab. Why? Just for fun …
Pop Report: There’s only one other BGS-graded copy of this card out there and it got a 9.0. I knew the centering wasn’t great here but it’s by far the best-looking one I had in my stash. 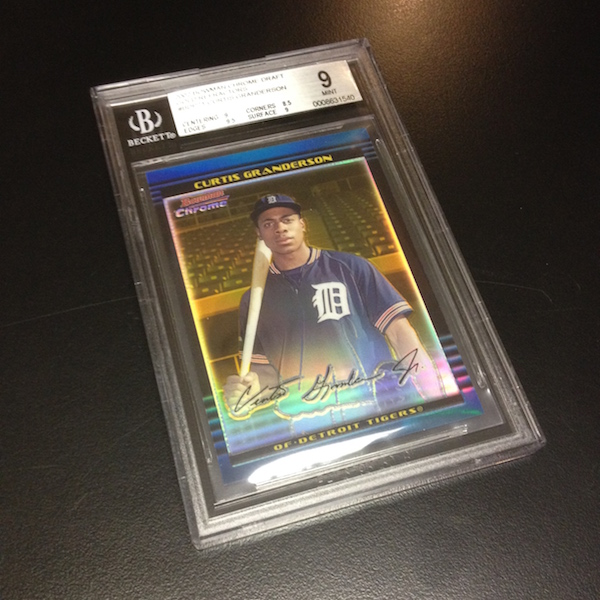 2002 Bowman Chrome Draft Gold Refractors #71 Curtis Granderson /50, $125 (raw)
This is a key card I have had tucked away in a top-loader for years and I figured it was time for grading even though I knew its centering might not be that hot. With so few copies of the card in existence, I figured encased was the way to go. Simple as that.
Pop Report: There are only 50 copies of this card and there are only 13 copies slabbed by BGS. There are five others just like mine and five that graded higher at a 9.5. A BGS 10 does not exist. 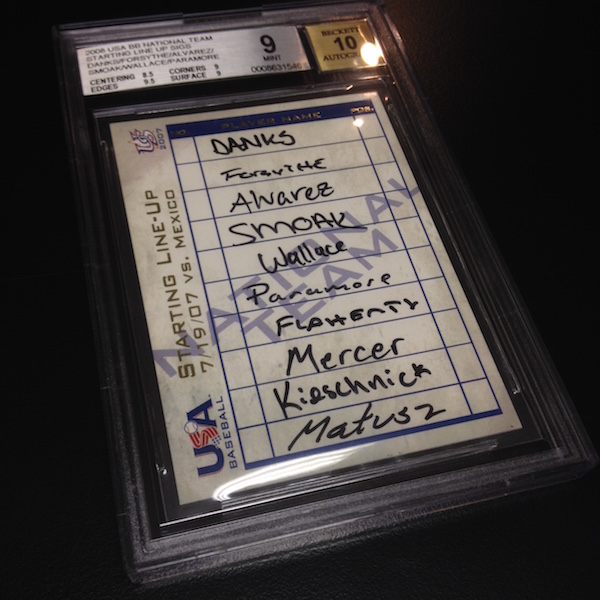 2008 USA Baseball National Team Starting Lineup Signatures #SL9 Jordan Danks/Logan Forsythe/Pedro Alvarez/Justin Smoak/Brett Wallace/Petey Paramore/Ryan Flaherty/Jordy Mercer/Roger Kieschnick/Brian Matusz, $N/A
Sure there are a few guys here who made it to MLB but probably had lukewarm results, but, believe it or not, I have pulled a few of these through the years when buying USA Baseball box sets. I figured I would test the waters of slabbing with the one that seemed the cleanest. A high-grade card might be a bigger challenge than you might think with the card handled by so many signers.
Pop Report: There aren’t many copies of any of these cards around but two other cards from the set have been slabbed. Mine is the first for card No. 9, while copies of card Nos. 1 and 6 have been graded, too. They both got 8.5s. 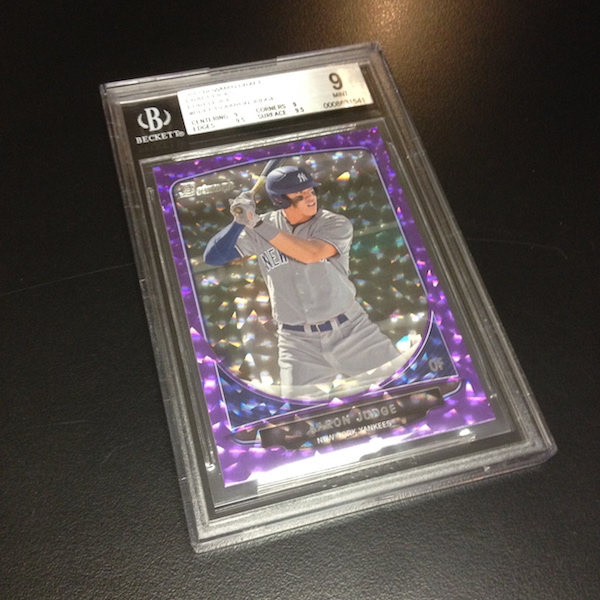 2013 Bowman Draft Draft Picks Purple Ice #BDPP19 Aaron Judge /10, $N/A
To tell you the truth, I didn’t think I had much when I pulled this card from a box back in the day — a Yankee and a rarity, but it wasn’t an autograph of some big name that I was chasing. Since then, though, he’s played pretty well as he’s advanced in the minors. It didn’t hurt that he was one of the more conscientious signers during the recent Panini America Road Trip where I could watch and see some of these guys work. I figured I needed it slabbed since I have quite a few Yankees pulls that I have had graded through the years, too.
Pop Report: There are very few copies of this card to go around, so I was bummed to see that my card was the lowest-graded of three that have made their way into slabs. (The other two were 9.5s.)

May BGS Diary Predictor: Which cards will Olds submit?

You wouldn’t believe how I got my ...