Which MLB Prospect Will Make the Biggest Impact in 2018?

So we thought we’d get a jump on the season and give you a list of ten prospects you should be collecting now. 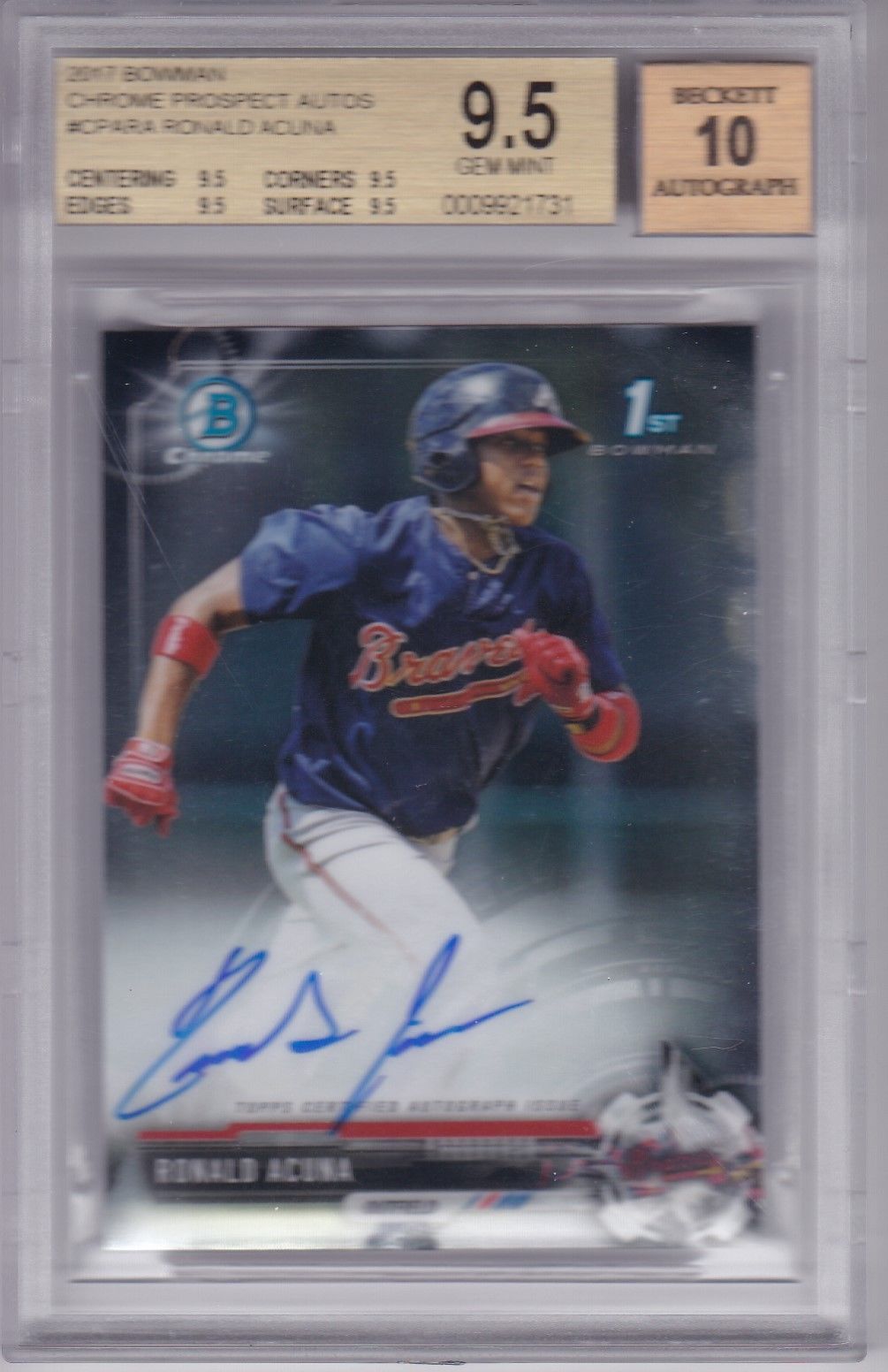 The 20-year-old phenom Acuña quickly emerged as the #1 prospect throughout baseball last season. He played in the Arizona Fall League only a few months ago where he hit 7 homers in just 23 games played. Acuña is projected to be the Braves starting left fielder right out of Spring Training in 2018. Early projections also indicate him as the early favorite to win the NL Rookie of the Year award. The sky is the limit for this kid and his cards already show that people are buying into the hype. Acuña’s 2017 Bowman Chrome Autograph is his most sought out card, sales during the off-season this winter have already reached $400-450 range in a BGS 9.5 at eBay auction. The card should continue to grow as we get closer to the start of Spring Training and when Acuña makes his MLB debut. 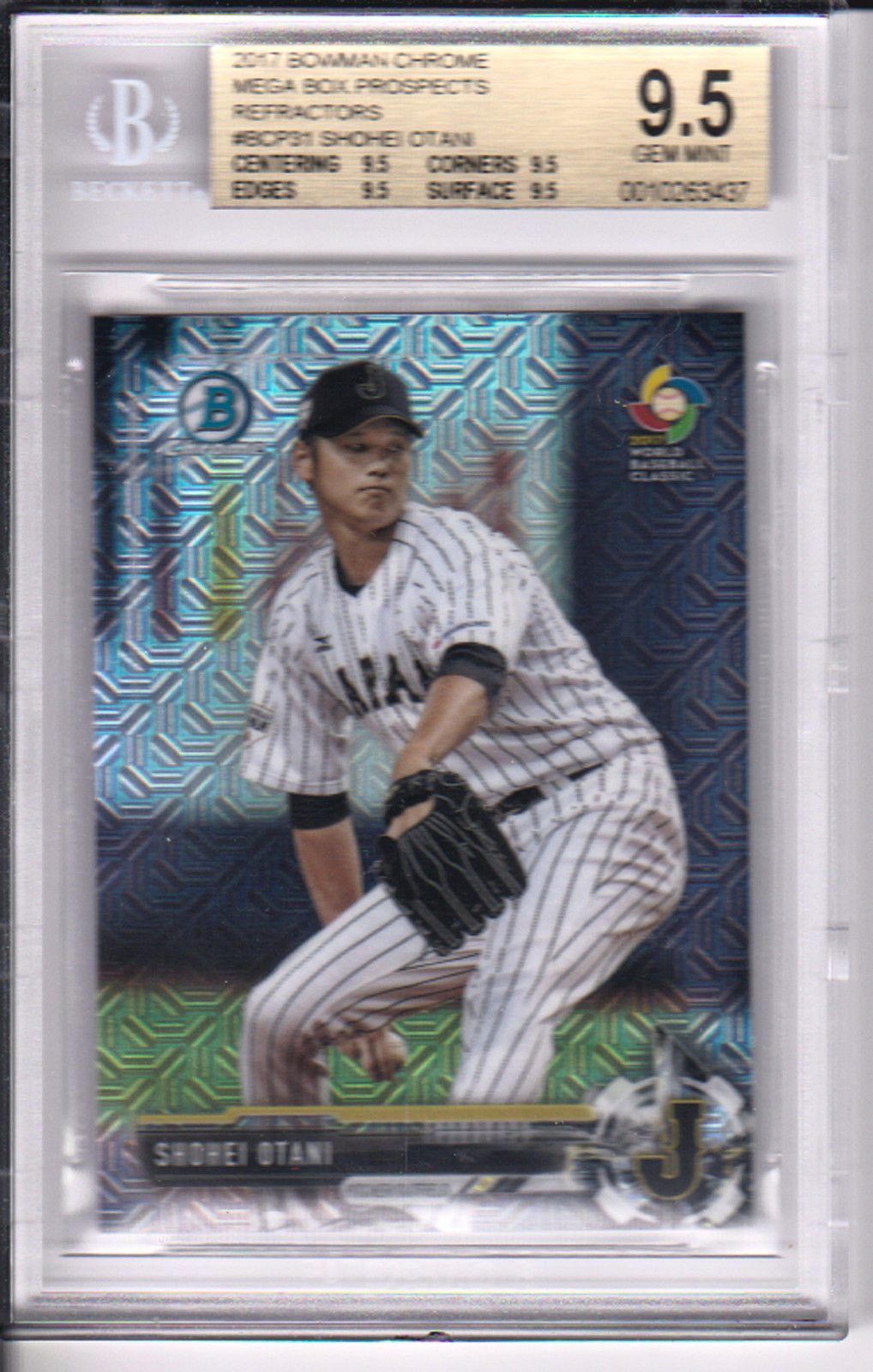 Ohtani is arguably the most hyped Japanese talent to come over to the MLB ever. He has a rare dual talent of being able to both pitch and hit, which has fans throughout baseball super excited to watch him play. Ohtani has ace potential as a pitcher with a powerful arm and his bat could easily translate to the MLB, too. He could become a consistent power hitter and will make a huge impact on the Angels this season. The newest Angels sensation will be one of the most talked about players in Spring Training and that should only benefit his cards more going forward. His most sought-after card this off-season remains as his 2017 Bowman Chrome Mega Mojo Refractor, which sells consistently at $150 in a BGS 9.5 at eBay auction. 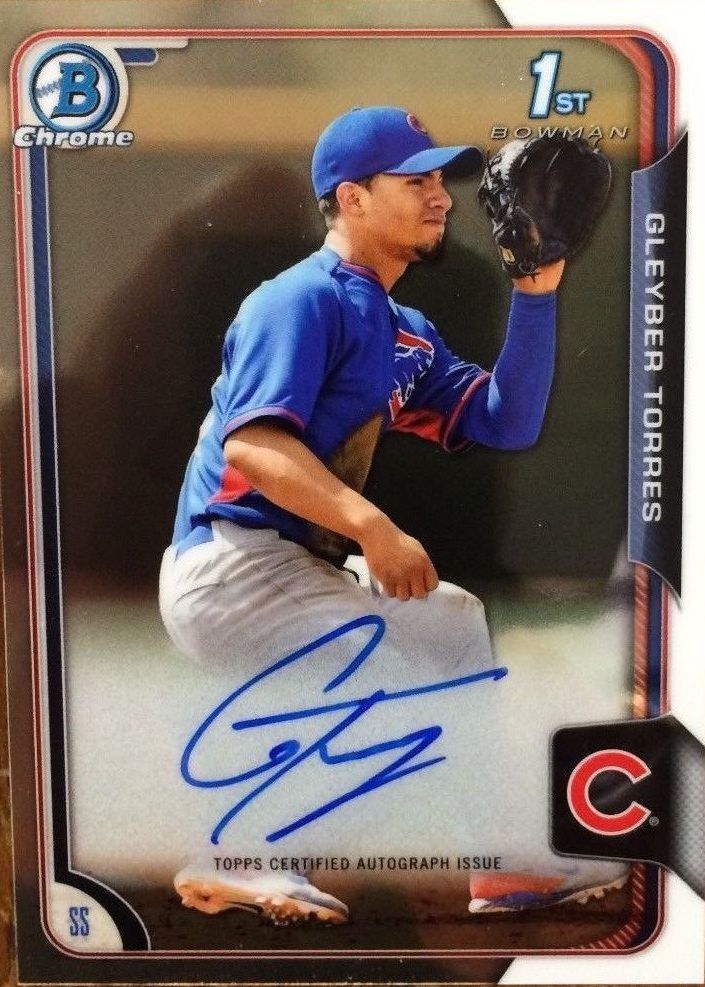 This 21-year-old has off-the-charts talent and will make an immediate impact in Yankee pinstripes this season. Torres could have easily gotten the call last season had it not been for an injury. He projects as a future superstar shortstop but look for him to play as a second basemen or third basemen this year on the Yankees roster. I’d expect him to win one of those starting jobs during spring training. Collectors are also buying into the hype as well, Torres’s 2015 Bowman Chrome Autograph card is one of the hottest cards this off-season. During this winter, eBay auctions indicate this card is selling in the $250-275 range ungraded. Look for Torres’s stuff to stay red hot from now until the start of the season. He is projected to be one of the favorites to win the AL Rookie of the Year as well. 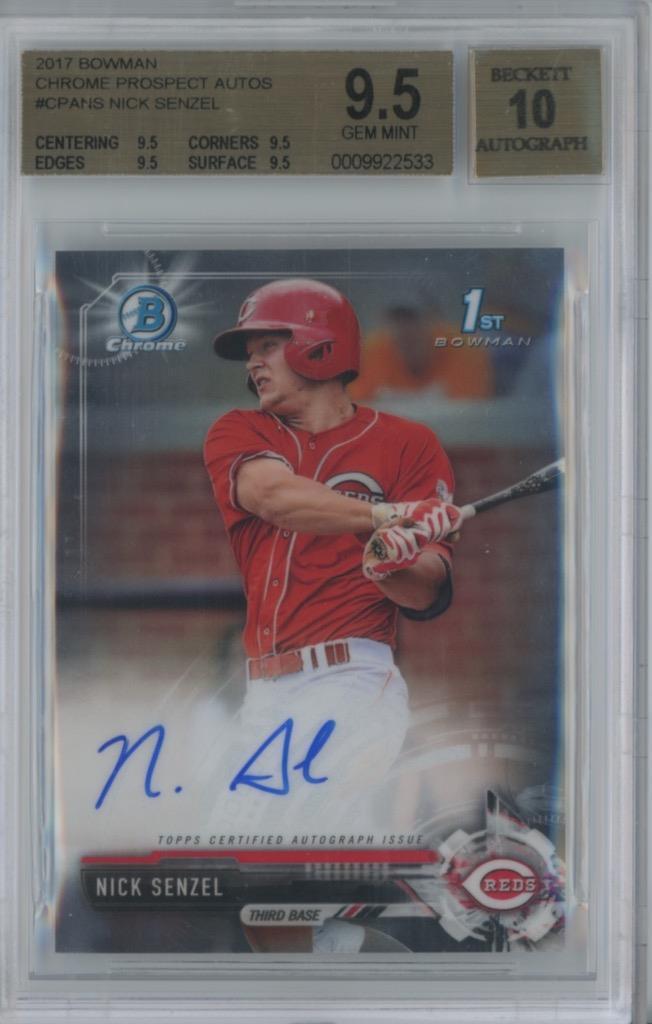 This 22-year-old third basemen is hopeful to join the Reds roster at some point during the 2018 season. Senzel projects to play multiple different positions for the Reds this season and his bat will get him to the big leagues sooner rather than later. The excitement of Senzel possibly arriving in the big leagues this season has caused his card to be one of the most sought after this off-season. Look to purchase his 2017 Bowman Chrome Autograph, which is selling for $150 at eBay auction in a BGS 9.5. 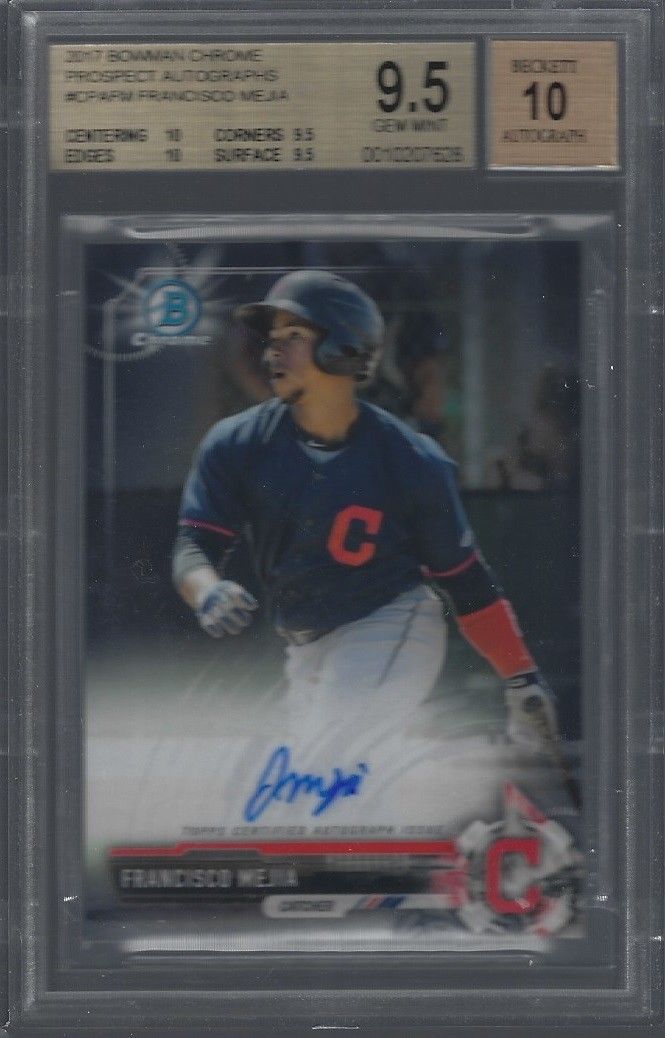 This 22 year old received a brief call up to the Indians last season, this season he should make a much bigger impact with the team. He’s ranked the best catching prospect in all of baseball. Mejia projects as one of the few rookie catchers to play in the big leagues during the 2018 season. Mejia’s 2017 Bowman Chrome Autograph remains as his most sought out card this off-season, which sells in the $50-65 range in a BGS 9.5. His card should continue to grow once Mejia is recalled to the team. 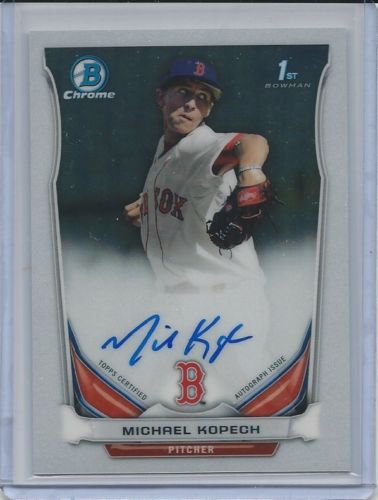 Known for hitting 105 MPH on the radar gun, Kopech could be Thor 2.0 in the Windy City with the White Sox this season. Already called up to Triple A level last season Kopech’s minor league numbers are staggering and he’s just about to be 22-years-old. Kopech’s 2014 Bowman Chrome Autograph card is his most sought-after which sells for $35 ungraded at eBay auction during this off-season. This could be a great buy-low investment and could easily double once Kopech receives a call up. Look for Kopech to receive the call to the White Sox sometime after May. 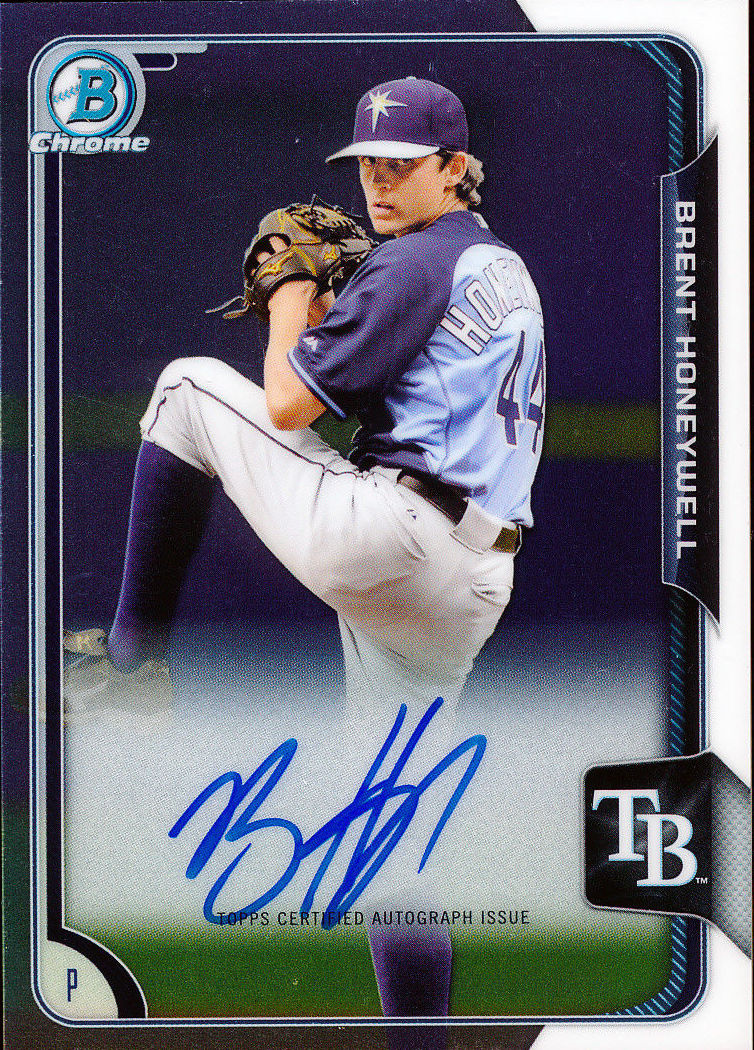 Honeywell is best known for his ability to throw a screwball, but he is also one of the best major league ready pitching prospects in all of baseball. This 23-year-old projects to have a big impact in the Rays rotation during the 2018 season. His most popular card is his 2015 Bowman Chrome Autograph which sells for $25-40 ungraded at eBay auction. This card should only continue to grow once Honeywell receives the call to the big leagues. Look for Honeywell to arrive early during the 2018 season with the Rays. 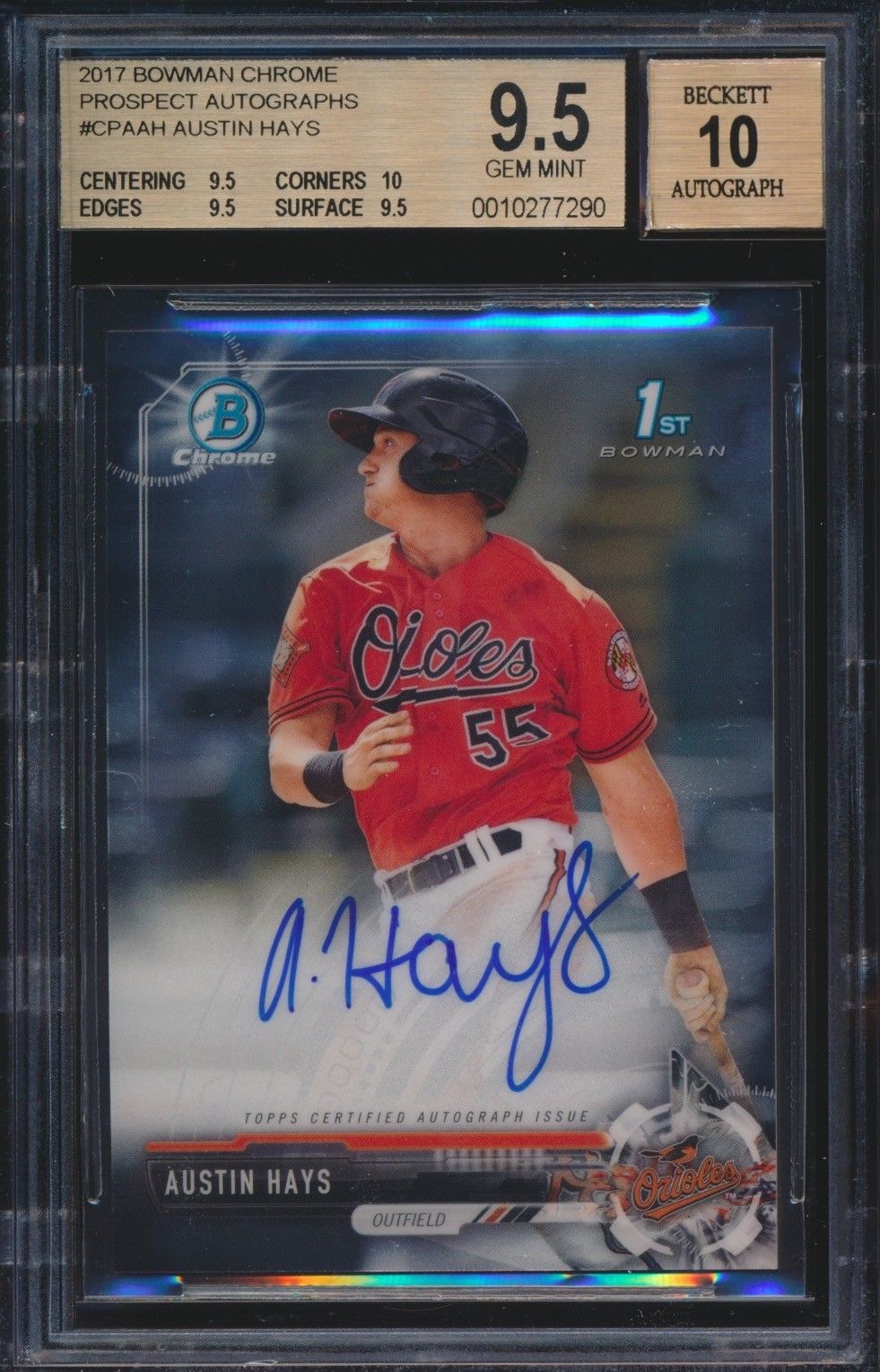 This 22-year-old outfielder projects to be the Orioles starting right fielder on their Opening Day roster. Hays hit a total of 32 homers last season amongst different minor league levels. He could easily be one of the sleeper prospects to emerge as a star this season. The card to get for him remains his 2017 Bowman Chrome Autograph which sells for $40 ungraded and $80 in a BGS 9.5. This card should continue to be very sought out from now until the start of the season. Look for Hays to make a big impact with his bat during the 2018 season with the O’s. 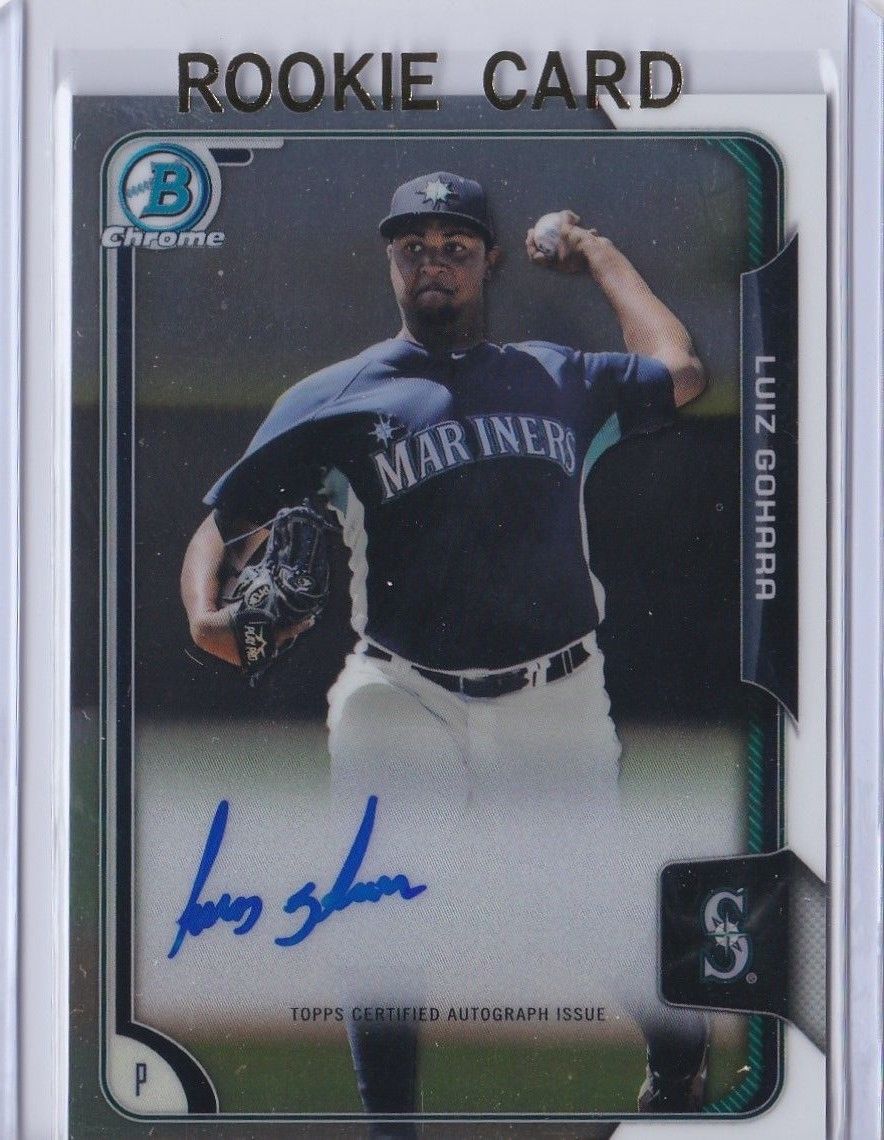 Gohara is a left-handed starting pitcher that features a powerful fastball that reaches upwards to 100 MPH with a devastating slider. He appeared briefly in the MLB last season with the Braves, 2018 could be his breakout season. This 21-year-old prospect has arguably the best pure stuff of any other pitcher in the Braves system. His 2015 Bowman Chrome Autograph when he was with the Mariners remains as his most popular card which sells in the $15-20 range. This is a great buy-low investment as Gohara has the potential to be dominant. Gohara should be a mainstay in the Braves rotation this season. 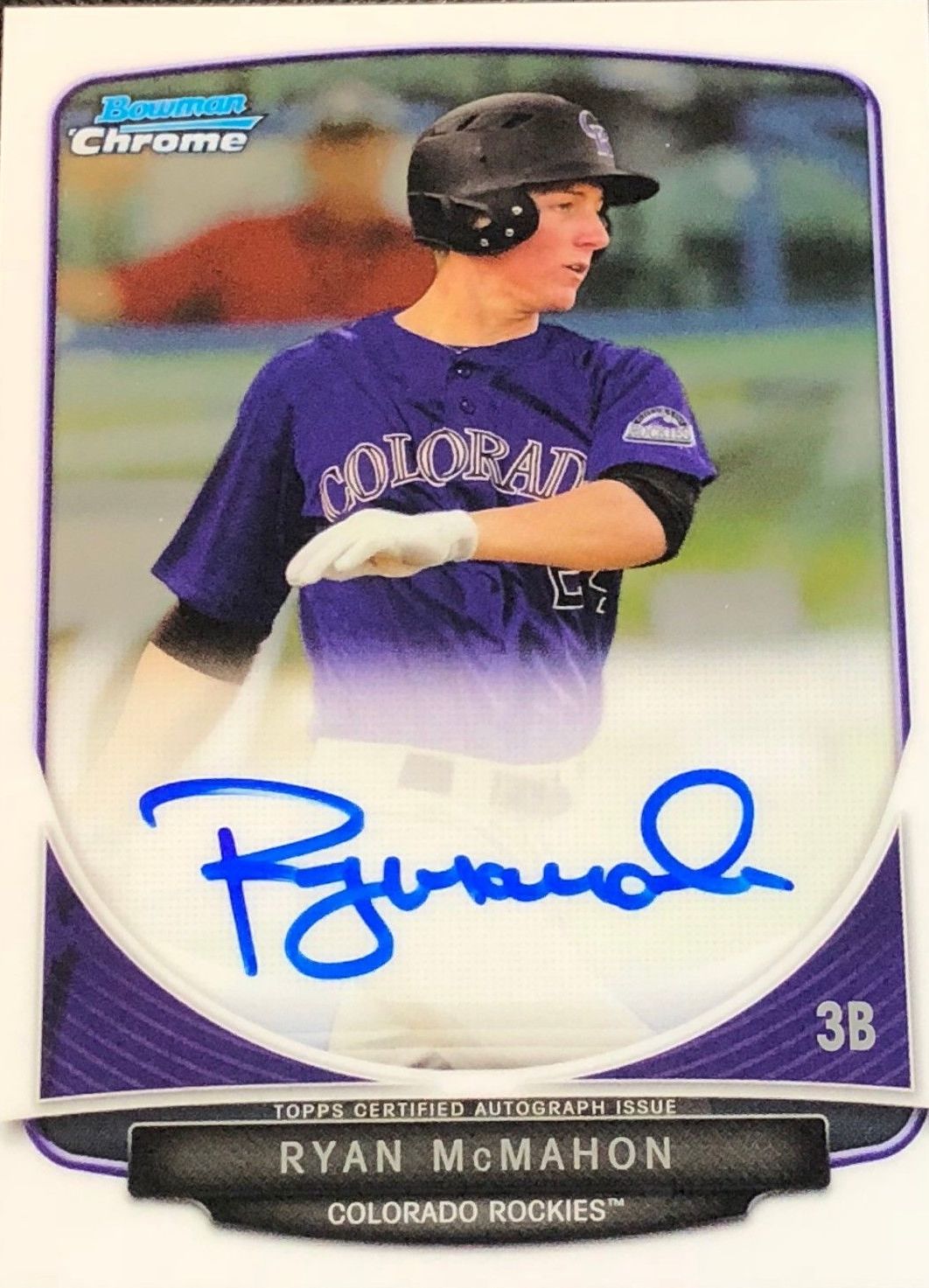 This prospect just turned 23-years-old and received a late call up to the Rockies late last season. McMahon projects to be the every day first basemen with the team at the start of spring training. He hit a combined total of 20 homers last season amongst different minor league levels. His most sought-after card is his 2013 Bowman Chrome Autograph Draft which has consistently selling at the $35 mark since last November at eBay auction. McMahon will have time to prove himself with the Rockies so now might be the time to buy while it’s still relatively cheap. He easily could be one of the nice sleeper prospects this season.

Who was left out that you have in your top 10? MLB Network will air their Top 100 prospects show on Saturday January 27th at 8 p.m. ET.