The long-running Topps Heritage baseball line is taking a trip this summer.

A trip down to the farm.

Each 24-pack box of this hobby-only product that carries the design of the 1962 Topps set will contain two autographs, one Relic and four numbered parallel cards. It’s only the second overall product line used for MiLB cards by Topps since it landed the exclusive license beginning last year.

Read more and see additional images after the jump. There will be a single Harper signed jumbo patch card while his standard Relics will include a piece of a base from his debut game in the Arizona Fall League. There will be a Black 1/1, a Green (/5), a Red (/50) and a Blue (/100).

The base set will consist of 200 cards with 50 short-printed All-Star cards found one in every four packs.

Among the signers for the product are Brett Bochy, Dickie Joe Thon, Jordan Pacheco, Jordan Swagerty, Nolan Arenado, Steve Geltz, Stephen Lombardozzi and many others. 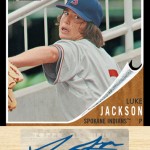 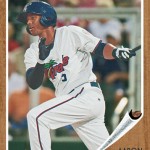 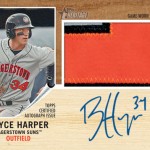 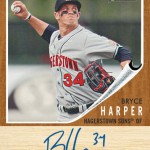