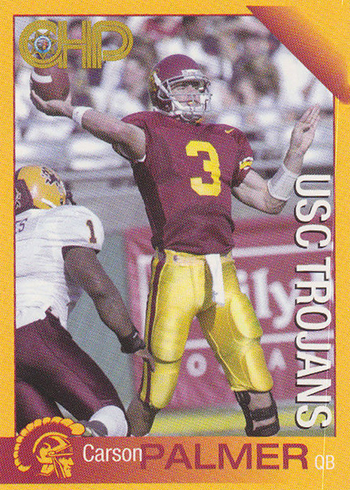 Carson Palmer has called it a career. If you want to go back and find his first official card, you’re going to have to head to school.

It’s rare that a player get their first cards while they’re still in college. It happens, just not regularly. And when they do, they’re likely to be a promotional item that something distributed through traditional packs.

Palmer is one of those exceptions. The Heisman Trophy winner didn’t turn pro until the 2003 NFL Draft. However, the first Carson Palmer card dates back to 2002.

The card was part of a stadium giveaway handed out at a USC game. Sponsored by the California Highway Patrol, Troy Polamalu is also on the checklist.

The Daily highlights a key player or personality in the world of sports or collecting from the past 24 hours along with one of their key cards.
TagsCarson PalmerThe Daily
Share:
Previous Article