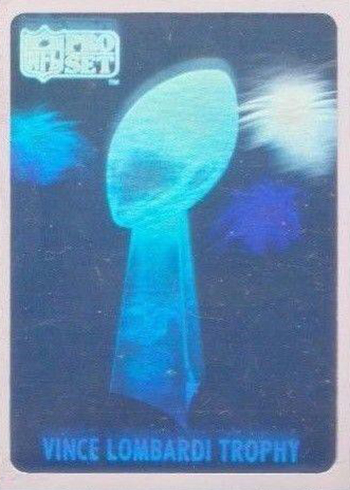 On Sunday, Super Bowl LII goes down. And it’ll either be Tom Brady and the Patriots adding another page to their dynasty or Nick Foles helping the Eagles finish the job that Carson Wentz started.

No matter the way things finish and who raises the Vince Lombardi Trophy, there are plenty of angles to come at it, all of which makes for an exciting game. At least on paper. Once the kickoff takes place, you never know how it’s going to play out. And even if the Eagles jump out to a big lead, like 28-3, the Patriots could still find a way to win.

While we’re looking at the Super Bowl and the Vince Lombardi Trophy, February 2 also marks an important date in Lombardi’s legend. It was on this day in 1959 that he signed on as the coach with the Green Bay Packers.

And when they go on to name the sport’s biggest trophy in your honor, you know you’re doing something right.

When it comes to early inserts, the 1990 Pro Set Vince Lombardi Trophy Hologram is the thing of legend. Yes, it has 10,000 copies. And that’s a lot — by today’s standards. But we’re talking about 1990 Pro Set Football.

This is a card of mythical proportions. Finding one was like striking gold. Add to that, it’s a hologram — the original cardboard sparkle.

When it comes to value, most Pro Set cards haven’t held up. But the 1990 Vince Lombardi Trophy Hologram is one that has. It’s one of those transcendent cards fuelled by rarity (for the time) and being the chase for a generation of collectors.

Can You Guess the Card Shohei Ohtani ...