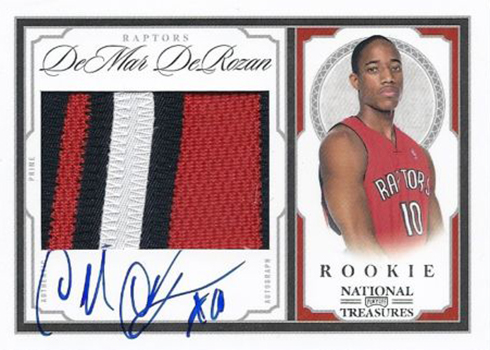 DeMar DeRozan is one of the NBA’s best. Interest in his cards might not necessarily put him among the league’s elite, but his play certainly does.

Last night, DeRozan dropped 52 points against Giannis Antetokounmpo and the Milwaukee Bucks. It came as part of a 131-127 overtime win for the Raptors.

The 52 points also set a franchise record, breaking the previous high of 51 scored on separate occasions by Vince Carter and Terrence Ross.

DeMar DeRozan Rookie Cards came out in 2009-10. That was the transition year when Topps and Upper Deck gave way to Panini’s exclusive. That means he has cards from all three companies, although the vast majority are Panini cards. Upper Deck and Topps were able to each get out a couple of early 2009-10 basketball sets before their deals ran out.

The 2009-10 Playoff National Treasures DeMar DeRozan is definitely his top Rookie Card as far as values go. Besides the brand prestige that comes with the super premium release, it’s one of only a handful of DeRozan RCs that comes signed.

Kid Collector of the Week: Colter and ...