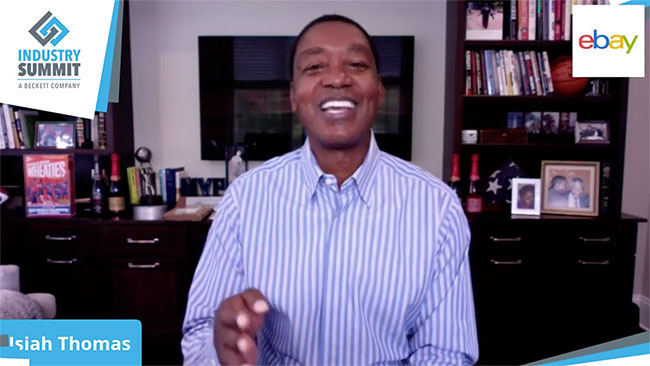 The overriding theme throughout his talk was one of perseverance. Thomas went into his own background of growing up in extreme poverty on Chicago’s West Side. He touched on several personal tragedies he and his family had to overcome over the years. Education was a big piece and something that Thomas still stresses today, referring to himself as a forever learner.

Thomas addressed the dealers directly, first thanking them for helping the collectibles industry grow over the years as it has helped the players as well.

“They were asking me for my autograph in college but when I got to the NBA, it seemed to be more of a business but more of a hobby and more of a friendship that we all had with the collectors as we moved from state to state and went from arena to arena,” Thomas recalled back to the early days of his career and his encounters with autograph collectors. “I always admired the perseverance of the community. I always admired their discipline and the determination.”

He then tied the idea perseverance into the current times, noting how the industry has had to adapt in recent months during the pandemic and found success.

Later during the talk, Thomas touched on playing for Coach Bob Knight at Indiana and winning the 1981 NCAA Championship. Thomas noted how Knight stressed how freedom and self-discipline made players great thinkers, “He always said, mental is to physical as four is to one. Basketball is a thinking man’s game.”

When asked about the four current players he likes to watch, Thomas was quick to list LeBron James, Kevin Durant, Stephen Curry and Kyrie Irving. He took it a step further by calling James the most fascinating player ever in the NBA. He noted that James is not only a complete player in every part of the game, but also a great thinker.

Jamal Mashburn was originally going to give the keynote address. However, he wasn’t able to make it due to unforeseen personal circumstances.