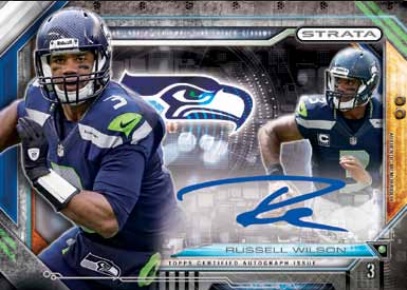 Strata Football is all about the layers and context. The hits are made with bringing multiple elements to one card, and that won’t change for 2014 Topps Strata Football.

Each box will have three hits: two autographs, including, a Clear Cut Autograph Relic card, and a relic card. There will also be five die-cuts in every box. Each pack will hold six cards with 18 packs in every box.

The Clear Cut Autographed Relic Rookie Cards will have five parallels along with four 1-of-1 parallels featuring rare swatches such as the Nike Swoosh. The Strata Signature Relic Cards will utilize multiple layers as part of the design. One of the parallels also includes Rivet, a design that allows collectors to fan out the pieces of the card.

Topps will feature more than one player on Clear Cut Dual Autographed Rookie Patch Book Card, which are rare 1-of-1 pulls.

There will be more than rookies in Strata. Veteran Strata Signature Patch Cards can also be found in 2014 Strata Football with a Rivet parallel. Other autographs hits include Strata Autographs (with six parallels), Strata Signatures, and Strata Quad Autograph Book Cards.

The Relic cards will be tougher pulls than the autographs with just one per box. These cards will include veterans and rookies and feature up to six autographs.

The base card checklist will feature 200 cards (100 rookies and 100 veterans). The rookie cards will also have six parallels with printing plates. The Strata Die-Cuts checklist will contain 50 players with autograph parallels. Topps is also including Quarterback Die-Cut with around 30 players – with the chance for autographed parallels.

Strata is scheduled to come out the week of Dec. 10. 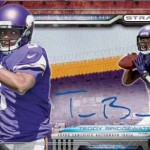 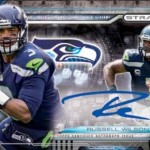 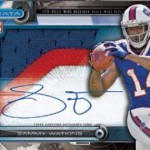 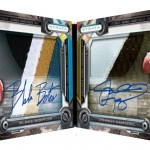