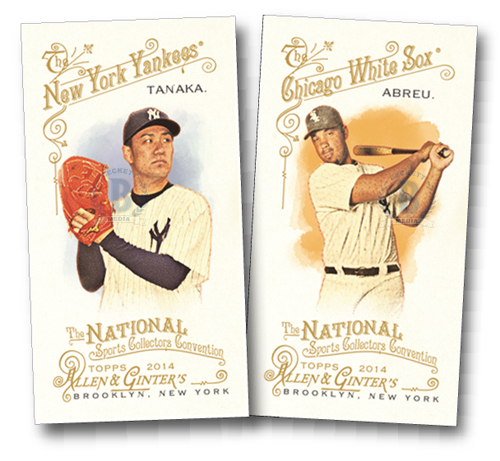 Collectors who visit the company’s booth during the show at the I-X Center from July 30-Aug. 3 and open a box of 2014 Allen & Ginter will receive one of two mini promo cards made just for the show — one of New York Yankees ace Masahiro Tanaka or one of Chicago White Sox slugger Jose Abreu. This is the only way to receive these cards.

A second wrapper redemption program will take place for collectors opening any three packs of any Topps product that is not Opening Day or 2014 Topps Minis, which will be making its debut at the show ($50 per box). For those who opt to open three packs, they will receive a mini card from one of these eight past and present NFL or MLB players: Johnny Manziel, Jadeveon Clowney, Jim Brown, Jordan Cameron, Derek Jeter, Mike Trout, Bob Feller or Albert Belle.

The cards will be available while supplies last.

The company will have its online crew selling memorabilia and apparel that carries a Cleveland focus at the show and it still is finalizing its plans for some special breaks and presentations during the show.

This year’s edition of Allen & Ginter is scheduled to arrive in hobby shops and other stores beginning on July 9.