Pinnacle released their first football card set in 1991, one year before the brand’s baseball debut. I feel safe saying that it wasn’t very pretty. It also didn’t include any parallels or inserts, which was par for the course in 1991. Heading into the mid-’90s all that changed. Pinnacle (Score) started producing some really nice looking inserts. They also unveiled Dufex printing technology on some insert cards and later used it on parallels. By the time 1996 Pinnacle Football arrived, the company was producing some of the best looking cards in the hobby. 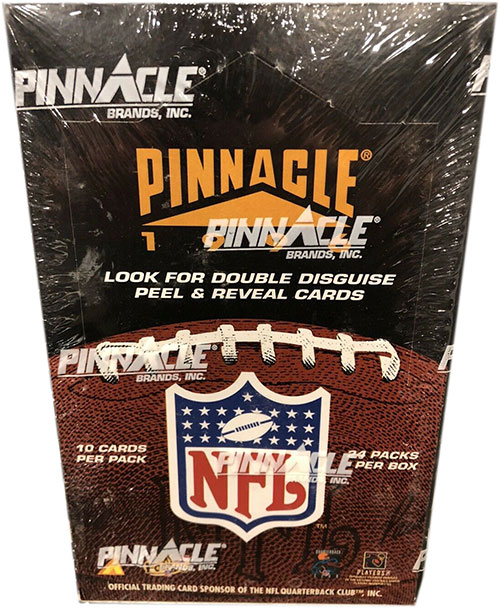 1996 Pinnacle Football consists of 200 base cards. They are borderless and feature a prominent gold foil pyramid (similar to the Pinnacle logo) that features the player names. More importantly, the set has two parallels and three different insert sets. All but one parallel and insert use Dufex.

This particular card revealed Steve Young on the front, and Emmitt Smith on the back. 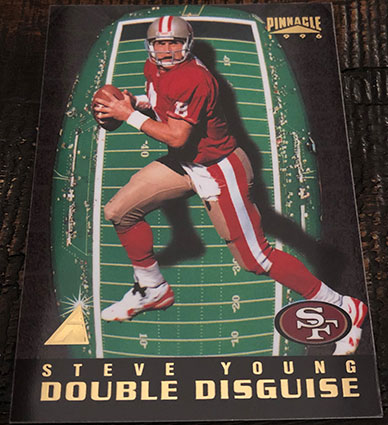 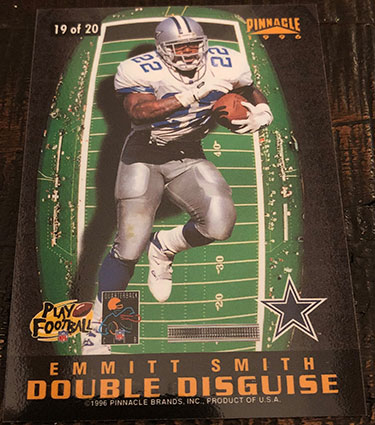 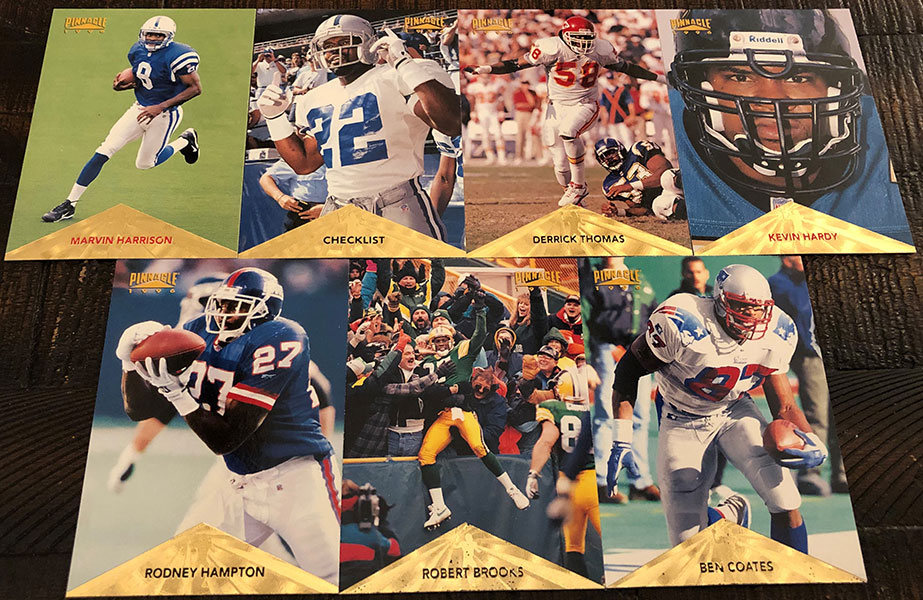 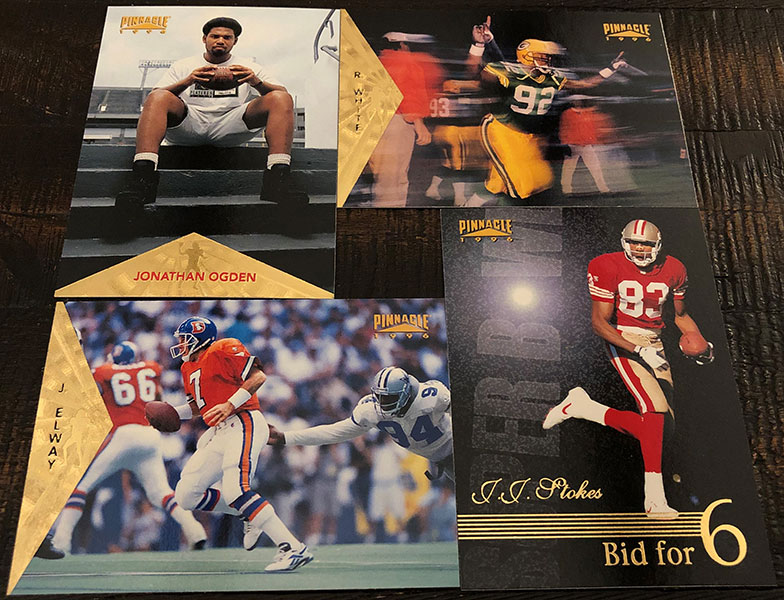 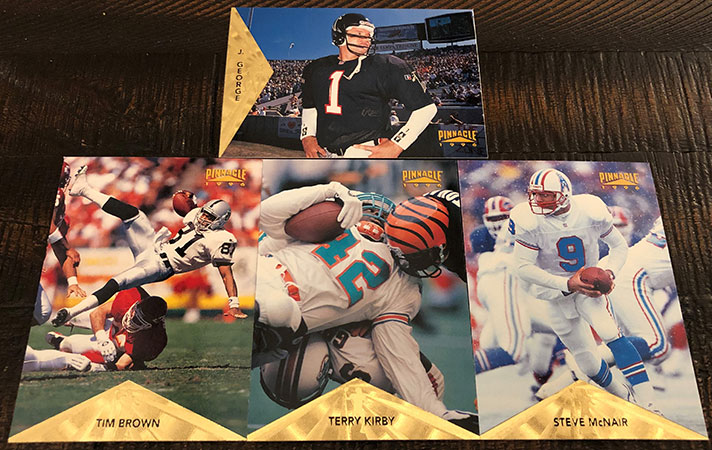 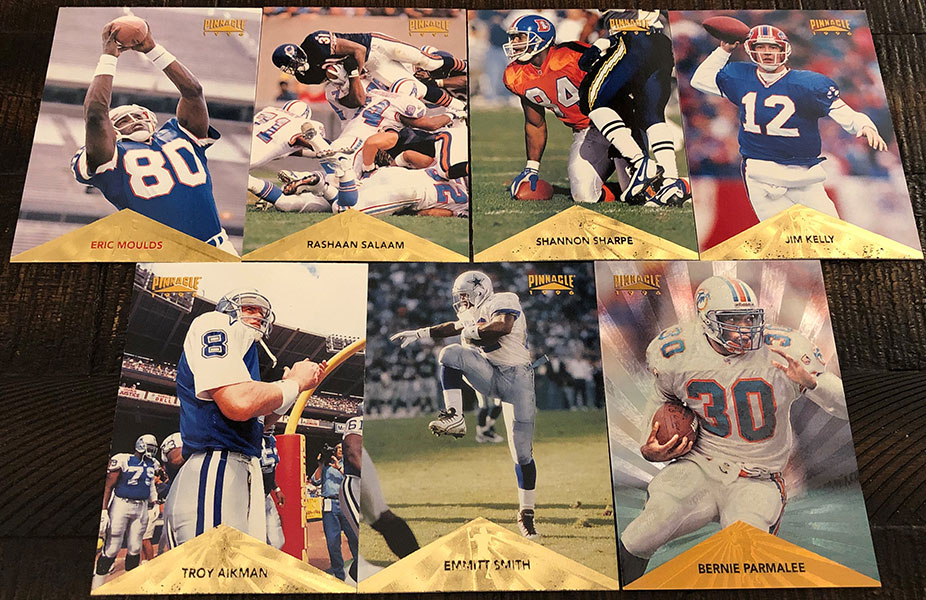 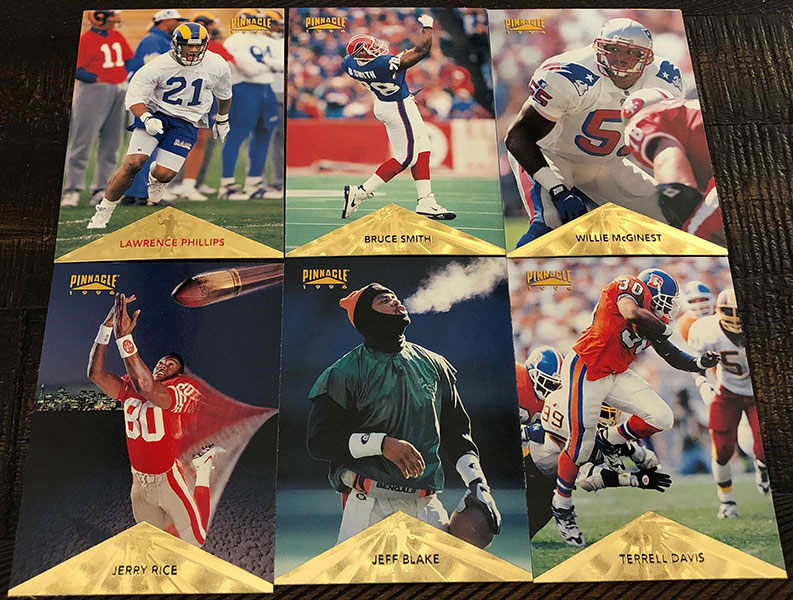 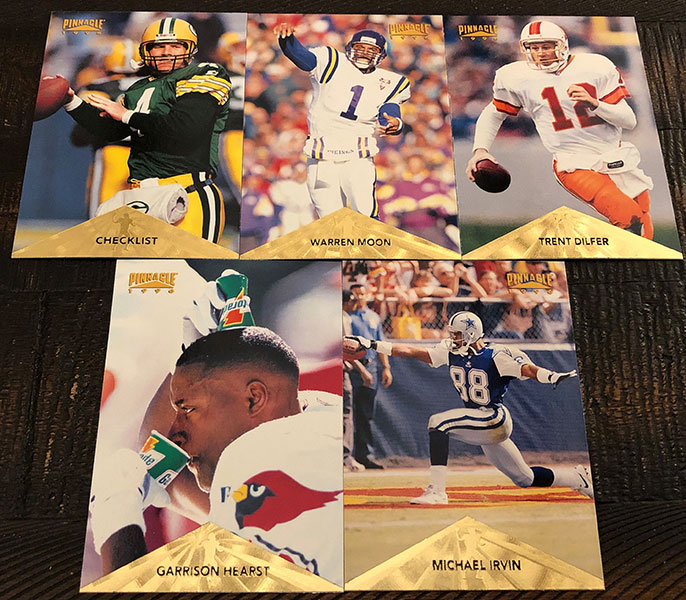 Same combo as the last Double Disguise card. Young & Smith, but reversed. Smith on the front and Young on the back. 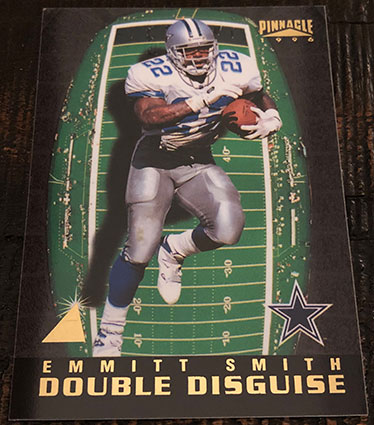 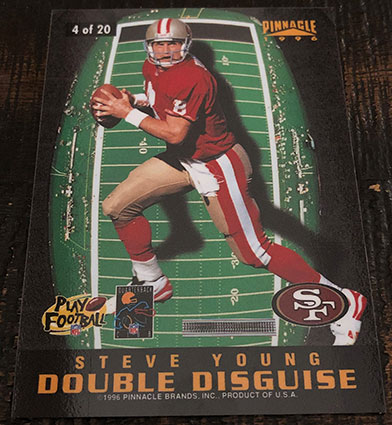 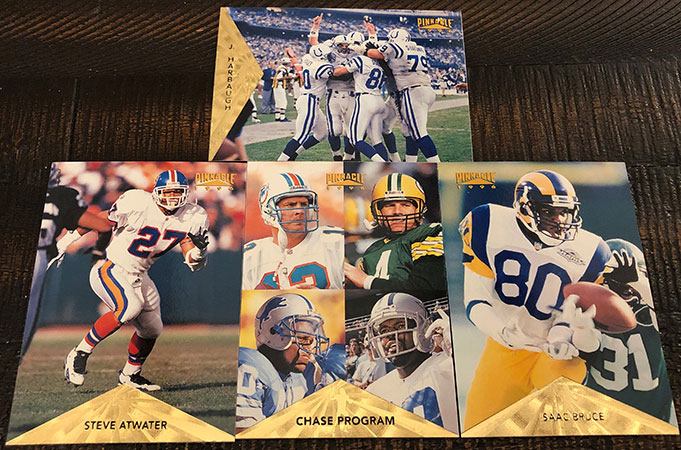 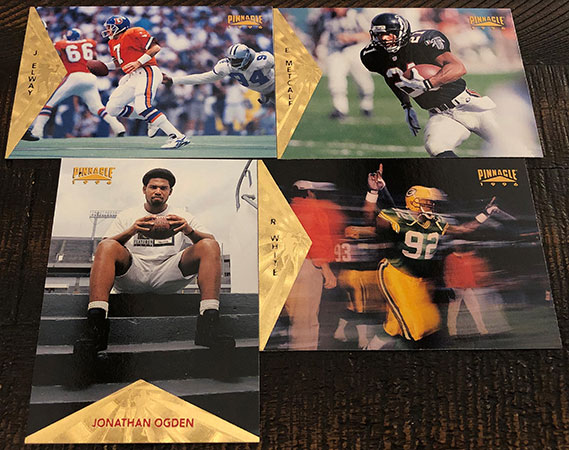 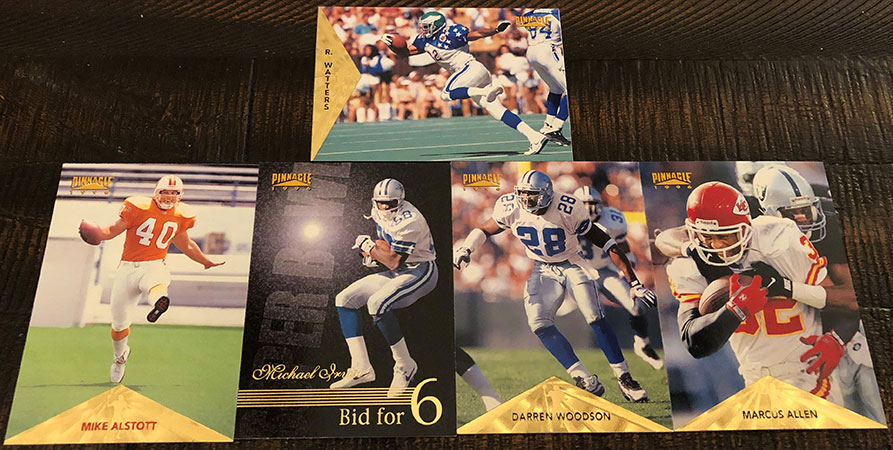 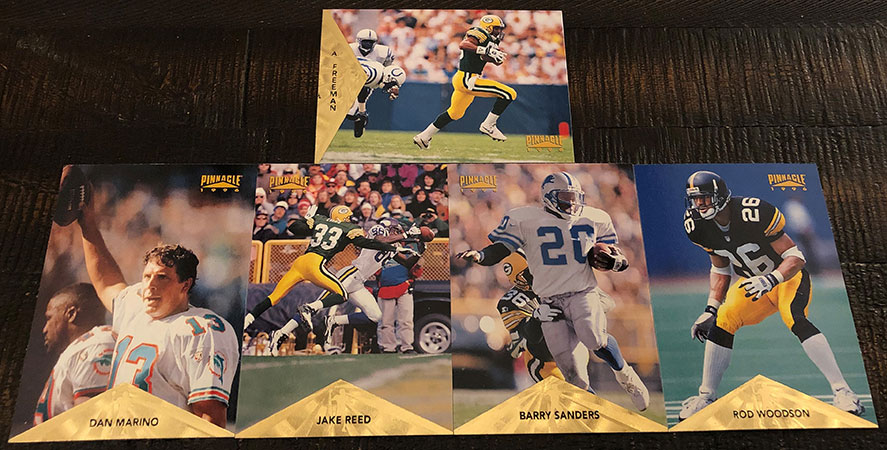 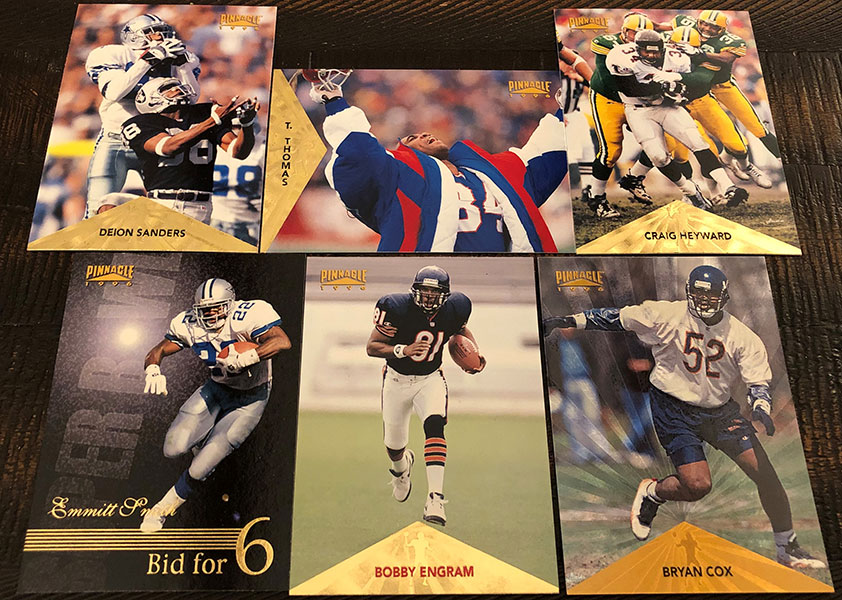 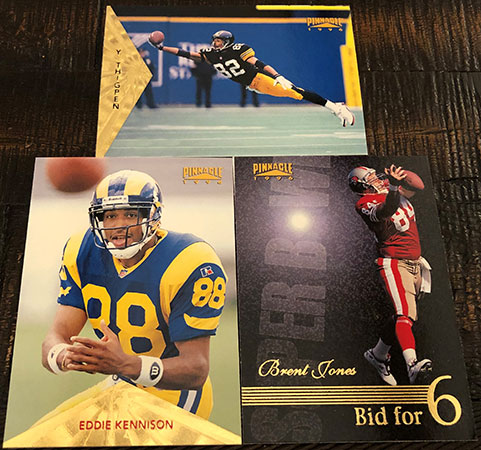 Lastly, the Prime Time card back. Pretty basic card back, though another picture is definitely appreciated. 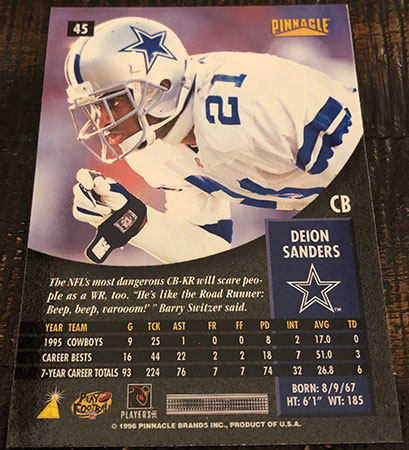 So I didn’t pull any great names for my Trophy Collection parallels. That isn’t surprising they have a 200-card checklist and only five per box. Van Dyke was probably the worst name in the On the Line checklist, which is a bummer. It’s a good looking insert set though. I certainly won’t complain about the mirroring Double Disguise cards I pulled. Now I can put one in each player’s section of my football player binders.

All in all, 1996 Pinnacle Football is a fun product to break, especially at just $18 a box. I may have to grab another if I can find one at that price to see if I can pull some better parallels.

Shop for 1996 Pinnacle Football on the Beckett Marketplace.