Your Turn (Beckett Baseball No. 100) — Who has impressed you the most in MLB this season? 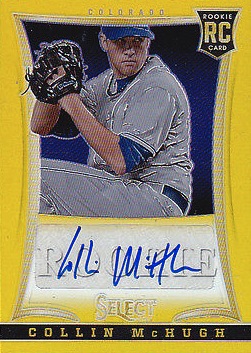 Perhaps it’s the resurgence of Albert Pujols, who finally appears primed to recapture his past magic but this time on the West Coast. Maybe it’s that newcomer Jose Abreu everybody seems to be talking about. Or the Cardinals’ 5-1 ace Adam Wainwright … or Charlie Blackmon, who seems to be putting on a hitting show in Colorado.

Or, maybe it’s 27-year-old pitcher Collin McHugh who picked up the first two wins of his big-league career this past week or so with 19 strikeouts, three walks and just one earned run in 15 innings of work as his Houston Astros knocked off Seattle and Oakland. (He has autographs in just four Panini America brands from last year.)

For the next issue of Beckett Baseball, we simply want to know … Who has impressed you the most in MLB this season?

Tell us in the comments below. We’ll run a selection of your answers in the next issue.