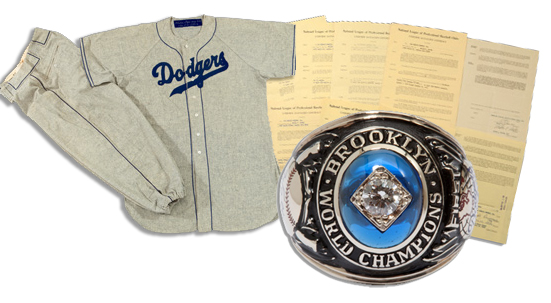 Walter Alston’s collection of personal memorabilia is being sold through SCP Auctions. The collection, which is being consigned by his estate, includes game-worn gear, championship rings and other artifacts from his career.

Highlighting the auction, which headlines SCP’s Mid-Summer Classic sale, are his World Series rings for managing the Brooklyn Dodgers in 1955 and three more with the team after they moved to Los Angeles in 1959, 1963 and 1965.

Also being auctioned are nine of Alston’s managerial contracts. He signed 23 one-year deals with the Dodgers between 1954 and 1976.

As far as gamers go, there are a couple of jersey and pant pairs. The first is a Brooklyn Dodgers road uniform worn in 1954, his first year with the franchise. There’s also a Los Angeles Dodgers uniform from 1963, one of his championship seasons.

Both of Walter Alston’s Hall of Fame plaque and induction ring from 1983 are also being sold.

Among the personal artifacts is a team-signed 1955 Brooklyn Dodgers baseball, Alston’s own collection of team and single-signed baseballs and a game-used catcher’s glove from Roy Campanella that was given to Alston’s granddaughter.