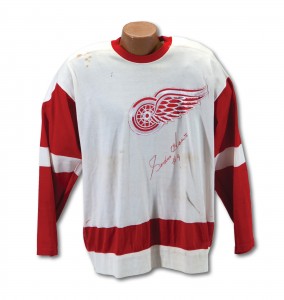 With a little over a week to go before the hammer comes down, the Detroit Red Wings jersey worn by Hockey Hall of Famer Gordie Howe during the late stages of his time with the club has edged toward $70,000.00 and SCP Auctions estimates that it could reach over $100,000.00.

“In the field of game worn hockey jerseys this is a pinnacle artifact, worthy of museum exhibition,” noted Dan Imler, vice president at SCP Auctions, via a press release. 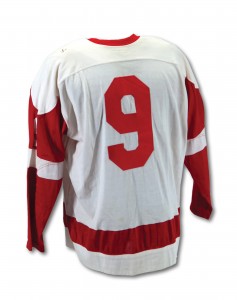 When it comes to game-used Gordie Howe jerseys, this style, which was made of dureen, is relatively tough to find. The team began using this material for their jerseys beginning in the 1962-63 season. This example is the second one that has been photomatched via MeiGray Authenticated as being from between 1968 and 1971 and was worn during the 1970-71 season, his final campaign in the Motor City before retiring for the first time.

In fact, 1970-71 marked the beginning of an era where teams began to wear light (or white) jerseys for home games, so it is possible that it was donned during his last game with the Red Wings at The Olympia, which took place on April 3, 1971. A 4-1 loss to the Chicago Blackhawks, the then-43-year-old Howe scored his 786th goal in the second period. It was assisted by Don Luce and Jim Niekamp and set his career totals at 1,809 points as well. Both totals were extended when he came back to the NHL almost a decade later as a member of the Hartford Whalers after six years in the World Hockey Association with Houston and New England. 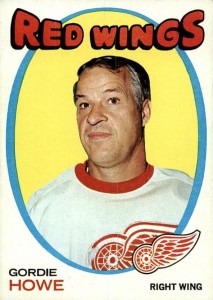 Interested bidders should note that the jersey is original and has not been restored at all. Howe, who passed away earlier this year at the age of 88, did sign it on the front in red ink. Evidence of game wear includes black marks, red paint transfer, pilling, and board burns. The jersey also has additional provenance with letters of authenticity from both Classic Auctions and respected game-used jersey expert Brad Moore.

Bidding for the Howe jersey ends on August 20 and more information can be found here.