Upper Deck isn’t out of the baseball market yet. The company teased SP Legendary Cuts Baseball on Wednesday with a product that featured more than baseball players.

SP Legendary Cuts Baseball is also coming out in June – and with no redemptions.

Each box will contain just one cut signature card. The single-player cuts are considered part of the 200-card base set. All cuts are hand-numbered to 35 or less. SP Legendary Cuts will feature 91 Hall of Famers such as Roberto Clemente, Ty Cobb, Jackie Robinson and Babe Ruth.

Upper Deck unveiled photos of some of the historic cards collectors can obtain.

See a full gallery after the jump …

As a baseball fan, one of the flashiest cards in the set is an eight-cut signature card with eight members of the New York Yankees’ Murderer’s Row, including Lou Gehrig and  Ruth.

There is also a quad-cut card of members from the 1919 famed Chicago White Sox team – the “Black Sox.”

But the entire box isn’t filled with baseball players. There are actually items in there that those outside of the hobby world could find intriguing, especially with The Royal Wedding still fresh in minds.

Princess Diana and Prince Charles will have their ‘Royal Couples’ card.

Then, the royal family that is a little closer to home — the Kennedys. 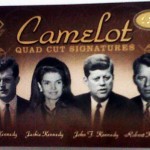