Upper Deck Ready To Celebrate 25th Anniversary at The National 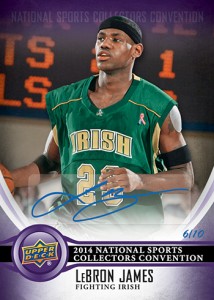 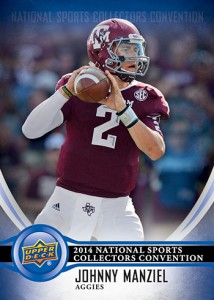 Upper Deck has released some early details about the exciting events and activities that will be taking place at their booth at the 2014 National Sports Collectors Convention in Cleveland, Ohio and it will be a celebration fit for marking the company’s 25th anniversary.

From July 30 to August 5, Upper Deck will be keeping collectors in attendance busy. For those hitting the show floor on the opening day, there will be a special party to show appreciation to dealers in attendance, but VIP attendees aren’t left out of the fun as there will be a special six-card VIP set available. They will also have a chance to win one of three packs of 2014 Upper Deck Exquisite Collection Golf.

An anniversary celebration would be nothing without cake and Upper Deck takes things up a notch afterward by holding a free giveaway.

Naturally, Upper Deck will also be holding a wrapper redemption that will see collectors receive special packs made just for the National. Autographs of many big names like Michael Jordan, Johnny Manziel and Wayne Gretzky will be randomly inserted.

As a special bonus, every 25th collector that participates will receive a free Fleer Retro Autograph pack for either football or basketball.

It should be noted that the packs collectors bring for the promotion need to be purchased from a Certified Diamond Dealer, who will give customers a special voucher to be taken to the booth along with the sealed packs. The redemption program is scheduled to start at 10:25 daily beginning on Thursday for as long as supplies last. Collectors are also limited to participating in the redemption four times per day.

Case breakers will not be left out of the action, either, as Upper Deck has put together a program that may appeal to them. After purchasing a case of either 2013-14 SP Authentic Basketball, 2013-14 Fleer Retro Basketball or 2013 Fleer Retro Football at the show from a Certified Diamond Dealer, they can skip the long lines and receive the following:

It should be noted that his promotion is only open to the first 75 collector choosing to participate and the items will be immediately made available to participants.

On Thursday, there willbe a special raffle for free spots in the next day’s Exquisite Case Break that will take place at 2:00 p.m. on the Amazon.com Sports Collectibles Center Stage. Two additional raffles will take place during the show as well.

The Expired Redemption Raffle sees Upper Deck accept expired redemption cards at the show for a chance to win on of 100 different prize cards and the draw will take place at 11:25 on Saturday morning. However, redemptions must be received by 11:00 a.m. that day. It will be followed at 2:25 p.m. on Sunday with the Decoy Reclamation Raffle which allows collectors to drop off 25 blank Upper Deck decoy cards to have a free ticket in a draw for one of five limited edition autograph cards.

There are also other free events that will appeal to show attendees.

For those that have dreamed about being on a trading card, Upper Deck will have a photographer present who will take a picture of them and it will be put on an actual card that is printed on site.

Young collectors are not left out of the fun, either, as there is a dedicated Kids Zone which will include visits from company mascot Coach Cardman, games and tournaments, special prizes and a chance to sit down and be creative at the “Draw Your Own Trading Card” table.

The Upper Deck Random Acts of Kindness Scavenger Hunt is another intriguing addition to the National. There will be 25 sealed envelopes hidden throughout the convention center which contain clues. These clues can then be shared at the booth and collectors can receive prizes.

Be sure to also visit the Upper Deck Authenticated Man Cave, which will display many of the company’s premium collectibles. Some of them will be on sale at exclusive show prices and this includes some items from the Suite One-of-One collection. The company will also be debuting their Upper Deck Educates program and elementary school teachers for grades four through six in attendance can send an email to UpperDeckMarketing@upperdeck.com to reserve a kit for their classroom.

Rounding out the action is some sports-related entertainment at the booth as artists Tim Carroll and Tim Decker create masterpieces, but the company has also teased a special guest set to appear on Saturday.

MLB’s All-Stars get their due in latest ...