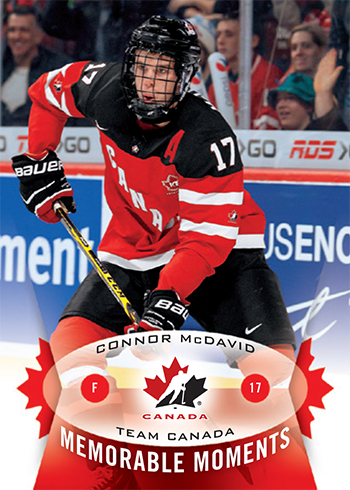 Collectors in Edmonton and Ottawa that were unable to make it to last month’s Spring 2015 Sportcard & Memorabilia Expo in Toronto will soon receive a chance to own the one of the special Memorable Moments promotional cards that Upper Deck produced exclusively for the show.

In Edmonton, several local card stores will be giving out the Connor McDavid card that features him in a Team Canada uniform. Almost certain to be the first overall pick by the Oilers in the 2015 NHL Entry Draft, he has been one of the hottest players this season and his rookie cards will be a hot commodity this fall. Some dealers in the Ottawa region are set to hand out a card of surprising Senators rookie Andrew Hammond and “The Hamburglar” is fittingly picking up a hamburger that a fan had thrown on the ice during his undefeated streak that took Ottawa to the playoffs.

What dealers are offering these cards as a gift-with-purchase? Find out after the jump. 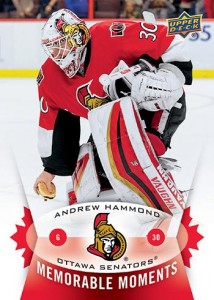 The Hammond card will be available at Gamebreakers, Out Of The Box, Miraj Trading, Entertainment Ink, EI Sports, The Comic Book Shoppe, and Le Coin De La Carte Sportive.