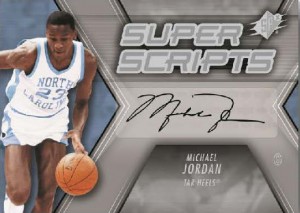 Upper Deck has just announced that their exclusive agreement with Michael Jordan has been renewed on a long-term basis.

The announcement came earlier today during their address at the 2015 Industry Summit in Las Vegas and maintains the company’s status as the lone producers of trading cards, memorabilia and authenticated collectibles.

“We are honored to be the exclusive provider of Michael Jordan collectibles,” said Upper Deck President, Jason Masherah in a press release. “We have worked diligently to bring the highest quality, most innovative Jordan memorabilia to collectors and we will continue to maintain the same level of service and authenticity that fans and collectors have come to expect from Upper Deck.”

Part of the benefit of having Jordan sign exclusively for Upper Deck is the provenance behind each piece and they are planning to strictly limit the amount of his signatures entering the collectibles marketplace.

“With so many forgeries on the market, it has become increasingly important for fans to trust the source of the autograph they are investing in,” noted Upper Deck Authenticated Brand Manager, Gabriel Garcia. “If the cost of an autographed item seems too good to be true, chances are that you aren’t getting the real deal. The only way for a collector to be confident that they are buying an authentic signature from Michael Jordan is to look for the official Upper Deck hologram and matching certificate of authenticity, available only through Upper Deck or Upper Deck Authenticated’s network of authorized dealers.”

With this deal in place, collectors may be waiting a while to see Jordan in a basketball card set from Upper Deck as the company has yet to announce any products hitting the market past 2014-15 SP Authentic, which releases in two weeks. However, it is expected that he will continue to be a part of multi-sport trading card releases.