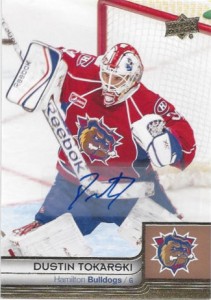 Back in July, Upper Deck released its first product featuring players from the American Hockey League and the boxed set was the precursor to a new exclusive deal between the NHL’s top development league and its lone licensed trading card producer.

Over the years, a mind-boggling number of future stars have played at the AHL level and were able to develop their skills before making the transition to the NHL game. With a current membership of 30 teams located throughout North America, there are strong regional followings which have supported clubs for decades.

“The AHL is thrilled to be able to bring the excitement of our league to fans though AHL trading cards and collectibles,” said David Andrews, the league’s President and Chief Executive Officer. “I know Upper Deck will be a great licensee to work with both now and in the future.”

The deal also has the involvement of the Professional Hockey Players’ Association, which represents not only AHL talents, but those in other leagues as well.

“This partnership is a huge credit to the caliber of players within the AHL who are thrilled to be featured by Upper Deck – a world-class leader in the trading card industry,” said Darryl Dionne, Director of Communications and Business Development for the PHPA. “This historic inaugural set is filled with top prospects on the verge of becoming full-time National Hockey League players, and we look forward to working with Upper Deck to feature PHPA members for years to come.” 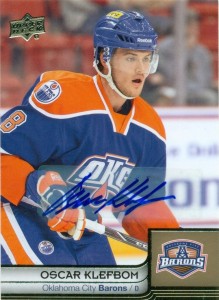 The 2013-14 Upper Deck AHL Boxed Set featured 100 cards and five autographs were also seeded inside. Many of today’s brightest prospects made the cut for this collection and some of them have yet to have made their NHL debuts. The company has noted that their planned 2014-15 release will hit store shelves in the spring and preliminary details stated that there will be even more autographs, stickers and even collectible logo patches.

The exclusive deal with Upper Deck also extends beyond trading cards and includes such collectibles as trading card games, posters, stickers and even figurines.

“We are excited to be able to work with the American Hockey League and the Professional Hockey Players’ Association,” said Upper Deck’s President, Jason Masherah. “With the start of the hockey season just around the corner, there is no better time to announce this new deal and to offer the AHL’s dedicated fans a new way to experience the game.”

In the past, other trading card manufacturers have been licensed by the AHL and PHPA. During the 2003-04 season, Pacific Trading Cards issued a series shortly before the company shut its doors. The following year, the licenses were assumed by In The Game, who produced AHL cards for several years as part of their Heroes & Prospects and Between The Pipes brands. Their relationship with both parties came to a close before the 2012-13 campaign.