Visiting the Hockey Hall of Fame in Toronto is on the bucket list of most fans as it gives them a chance to look at many of the game’s priceless artifacts and potentially have an opportunity to get up close and personal with the Stanley Cup. 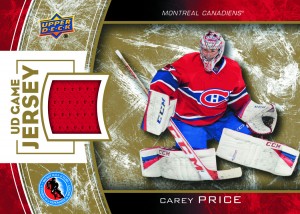 During this summer, however, there is yet another reason to make this pilgrimage as Upper Deck has combined with them during their NHL Team Days to offer up special game-used memorabilia cards featuring many of the best goaltenders in the sport today. There will be one for each team. Naturally, treasures like these will not be available in packs and instead are given out to the first 1,000 paid guests each specific day during the promotion.

The schedule for the giveaway is as follows:

Collecting a set like this will prove to be quite challenging, but the Hockey Hall of Fame is running a special promotion on their Twitter feed (www.twitter.com/HockeyHallFame) where one lucky fan will win all 30 cards. Each day also features additional bonuses such as additional gifts or autograph signings.  Full details on these events will be posted on the Hockey Hall of Fame’s website.