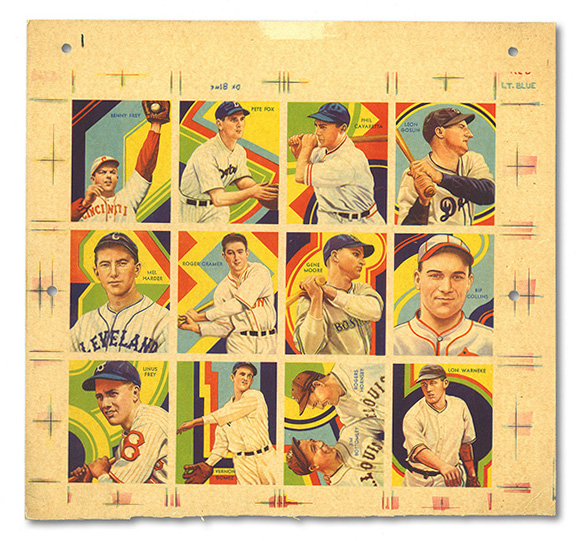 The 1934-36 R327 Diamond Stars Baseball set is one of the most beautiful ever produced. Although the final checklist for the multi-year set reaches as high as #108, apparently there were plans to take it higher.

A 1936 R327 Diamond Stars Baseball uncut sheet shows 12 more cards made it to the drawing board and beyond.

It was discovered in the 1980s by a family member of a printer who used to work with the National Chicle company that produced the Diamond Stars set. The sheet was first made available in 1991 at a Sotheby’s auction. After that, it sold not long after for $75,000. It also spent some time hanging in the National Sports Gallery in Washington.

The 12 cards feature 13 total players. Leading them is a card with St. Louis Browns teammates Rogers Hornsby and Jim Bottomley, both of whom are in the Hall of Fame. At the time, not a lot of cards highlighted two players. Lefty Gomez and Goose Goslin are two more Cooperstown inductees that are also on the sheet.

Here’s a full list of the players on the 1936 R327 Diamond Stars Baseball uncut sheet:

The cards are blank on the back. The front shows all the printer’s marks. Overall, it’s in decent shape with the exception of a crease in one of the corners. However, that’s in the white frame of the sheet and it doesn’t extend to the cards.

The sheet is about to be put up for sale for the first time in almost two decades. It’s slated to be part of SCP Auctions‘ Spring Premier Auction. Bidding runs from April 6-23.