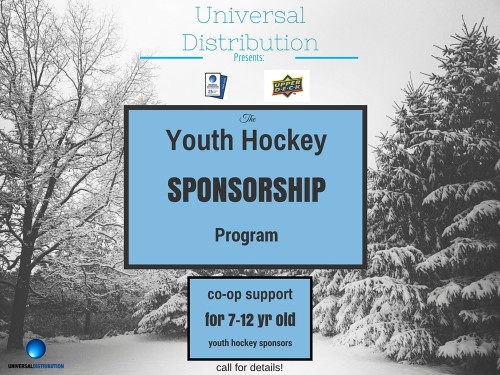 Supporting kids in their quest to make it to the NHL or even simply enjoy the game is not always possible without the kind support of the community and card stores everywhere often consider throwing their time, money, and effort behind a local club. Universal Distribution is partnering with Upper Deck to create a Youth Hockey Sponsorship Program and dealers can receive recognition and, potentially, prizing, when they help make some dreams become a reality.

Universal and Upper Deck will combine to provide up to $500.00 in support money to sponsor a house league kids team and a lucky dealer could win an athlete appearance involving both their store and team in addition to special product and prizing for promotions held in-store. The initiative is also supported by the National Hockey League Players’ Association. There will also be a web page that is dedicated to the program and participating dealers will receive promotion on it.

The program is set to go into full swing in time for the 2016-17 season. Dealers interested in participating or wishing to obtain additional details can email David Vatri at david@universaldist.com.