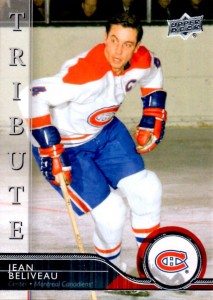 Collectors breaking boxes of 2014-15 Upper Deck Series 2 may have noticed that they have found some cards that were not officially listed on any checklists or sales materials and the company has confirmed the existence of these tough pulls.

One of the most important of all of these unannounced inserts is the Jean Beliveau Tribute card, which looks back on the career of one of the game’s greatest players. What some collectors may not realize, however, is that Upper Deck also issued a special Jean Beliveau Tribute Autograph that is limited to just 10 copies.

What other special content can be found in packs of 2014-15 Upper Deck Series 2? Find out after the jump. 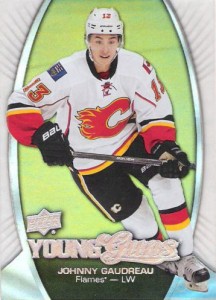 Last year, there was some surprise surrounding the Young Guns Acetate cards and they are back again in 2014-15. Essentially, these serve as a parallel to cards 201-249 from 2014-15 Upper Deck Series One and the lineup boasts solid names like Johnny Gaudreau, Sam Reinhart, Leon Draisaitl and Aaron Ekblad.

A second unannounced parallel set comes in the form of the 2014-15 O-Pee-Chee Retro Update Blank Backs. Made up of 42 cards depicting both traded players and rookies, they are traditionally a difficult pull that will be sought after by player collectors. 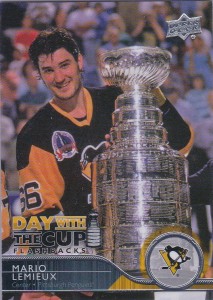 In recent years, Day With The Cup has proven to be a popular long-odds hit and Upper Deck has tweaked it slightly with a Flashback version that pays tribute to members of the 1990-91 Pittsburgh Penguins. This four-card collection includes Jaromir Jagr, Mario Lemieux, Tom Barrasso and Ron Francis and shows them all celebrating their first championship. 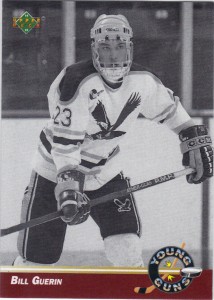 Finally, there is a final concept that carried over from the previous series in NCAA Retro Flashbacks. Perhaps the last CLC-licensed cards to appear in an Upper Deck hockey release, the Retro Flashbacks utilize old Young Guns designs for players who were not a part of those subsets many years ago. Look for 1990-91-style cards of Rod Brind’Amour and Mike Richter and a 1992-93 card of Bill Guerin.

Upper Deck has noted that they will not be releasing any information in regard to the print runs or seeding ratios for all of these sets with the exception of the Jean Beliveau Tribute Autograph.