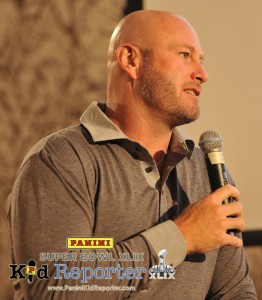 Now in its second year, the Panini Super Bowl Kid Reporter contest awards one lucky collector with a dream trip to the Super Bowl and the opportunity to serve as Panini’s official reporter for Super Bowl Media Day. This year, Dilfer will provide the winner with one-on-one media training in advance of Super Bowl XLIX Media Day.

“I love what Panini America has done with the Super Bowl Kid Reporter promotion and am honored to be involved in such a meaningful way this year,” Dilfer said. “This is truly a once-in-a-lifetime opportunity for one lucky kid and his family – and it’s an opportunity that’s made available just by buying packs of Panini America NFL trading cards.”

Panini Super Bowl Kid Reporter entry cards are inserted into every pack of the company’s 2014 Score, 2014 Rookies & Stars, 2014 Prizm, 2014 Absolute and 2014 Contenders NFL card products. Fans and collectors can enter the contest by simply entering the promotional code found on each entry card at the Panini Super Bowl Kid Reporter website at www.paninikidreporter.com.

“In a pretty short time, our Panini Super Bowl Kid Reporter promotion has grown into one of our most important marketing initiatives,” said Jason Howarth, Panini America Vice President of Marketing. “It’s a major driver for our products at the mass-retail level and provides the ultimate reward for one lucky fan – just for collecting our NFL trading cards.”

In addition to the grand prize, Panini America awards more than 350 additional prizes throughout the course of the Panini Super Bowl Kid Reporter contest.