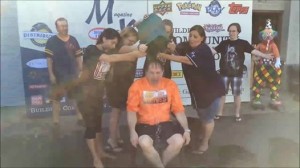 Individuals from throughout the trading card industry – and even groups of staff members from Upper Deck and Topps – have invested in the wildly successful ALS Ice Bucket Challenge during the past few weeks.

As you would expect, the videos are priceless.

The highlight so from an engagement perspective has been a head-to-head challenge from Upper Deck that was accepted by The Topps Company. Take a moment after the jump to watch and consider making a donation of your own as the post ice-bath expressions from Topps Vice President and General Manager, U.S. Sports & Entertainment, Doug Kruep and Upper Deck’s Senior Marketing & Social Media Manager Chris Carlin are incredible.

And then watch Topps reciprocate on their Facebook page here.

Many other industry executives from across the United States and Canada have engaged in the ALS Ice Bucket Challenge as well. Some of our favorites include:

Amyothropic lateral sclerosis (ALS) is described as a progressive neurodegenerative disease that has a major effect on nerve cells in the brain and spinal cord. The progressive degeneration eventually leads to death as motor neurons die off and the brain is unable to initiate and control muscle movement. As the disease progresses, patients may become totally paralyzed. The most prominent victim of ALS was Baseball Hall of Famer Lou Gehrig, who passed away in 1941.

The ALS Ice Bucket Challenge was started by former collegiate baseball player Pete Frates and Topps is currently offering up a special five-card set of wall art featuring Frates that will see all proceeds donated to help strike out ALS. For more information, check out Beckett’s story here.

Please share your favorite link to an sports card industry Ice Bucket challenge below – and if you have not already done so, please join the team at Beckett Media in making a donation to help support the fight against ALS!

To make a donation, please visit the ALS Association’s website.