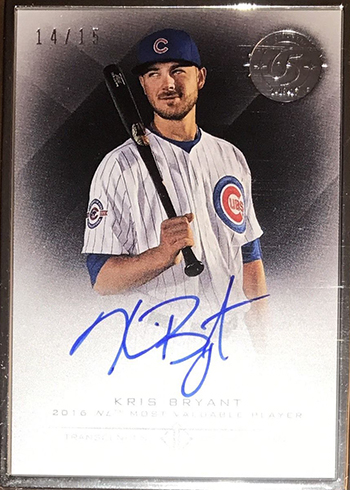 You knew the Topps 65th Anniversary party was going to be more than just a nice meal. Held in Las Vegas on January 18, the only way to attend was with an invitation found in 2016 Topps Transcendent Baseball, a product that cost more than $20,000 per briefcase.

First off, there was the special guest. On the invitation, it was a mystery. But Topps quickly confirmed that it would be Kris Bryant who would be appearing.

This was a party hosted by a card company. So, of course, there were exclusive cards made for the event as well. Some big-ticket cards at that.

Not surprisingly, many of the Topps 65th Anniversary party exclusives were connected to Bryant. Among them was a handful of new 2016 Topps Transcendent Kris Bryant autographs. Each is numbered to 15. They each use a different photo and caption.

Keeping with 2016 Topps Transcendent, gift bags came with a set of 65 different Kris Bryant cards — one for each of the Topps Baseball flagship designs from 1952 through 2016. These match the one-of-one Kris Bryant autographs made for the product. 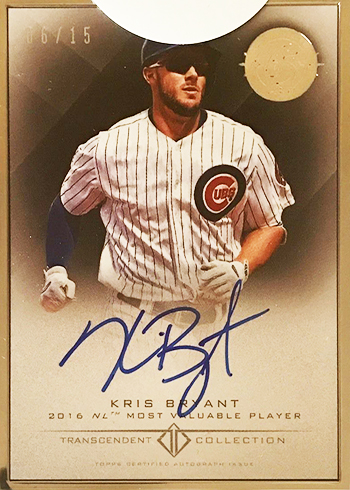 Every guest also received a special Kris Bryant BUNT card. Numbered to 65, backs have a code that can be used in the app.

Not everything handed out was Bryant-related, though. Guests received one of four different Mike Trout autograph cards made exclusively for the party. According to Topps, these use the 1953, 1955, 1979 and 1991 designs. Each of the Topps 65th Anniversary Party Mike Trout Autographs is numbered to 15.

Those at the Topps Transcendent 65th Anniversary Party may get 1 of 4 specially made Mike Trout autographs for the event (not pictured 1990) pic.twitter.com/wrtNTzZfqh

Finally, there was a hodgepodge of cards from various sets that came with a 65th Anniversary foil stamp. These covered a variety of years and product including some yet-to-be-released 2017 Topps Series 1 cards. Regular base cards are one-of-ones while some autographs and premium cards are numbered to 5. 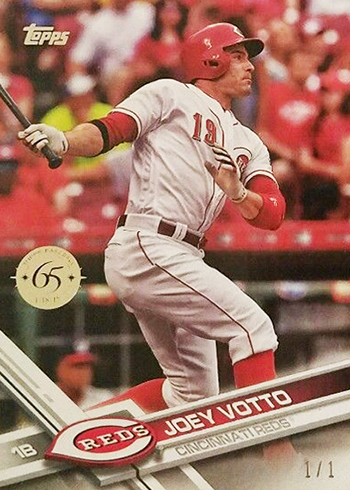 In addition to the exclusives, many big-ticket cards were also given away at the party.

Some of the exclusive cards from the party have made their way to eBay. However, given the nature of the event and their already limited nature, don’t expect any sort of flood to hit the market.